“What the report also makes clear is that sweatshop labor is highly gendered. Between 71-85%…are women, the majority of whom are also under the age of 35.”

I was recently drawn into a facebook discussion about the ethics and efficacy of refusing to eat at Chick-Fil-A on account of its president’s public “we are inviting God’s judgment on our nation” opposition to same-sex marriage as well as the chain’s financial support of socially conservative groups.

I noted that consumers who boycott businesses generally do so because they believe that (1) continuing to patronize a place would be at odds with their core values, or that (2) their actions will “make a difference” by exerting financial pressure on the company to amend their ways. These two reasons could be related, though they often are not. People can act in accordance with their conscience without believing that they have accordingly instigated social change (n.b., just think of the earlier 2004 decision by the Presbyterian Church U.S.A. to selectively divest from certain companies in Israel), just as companies can be compelled to alter their policies by other means than by their clientele taking their business elsewhere.

I affirmed these ideas again this weekend when I guest-taught adult Sunday School at Claremont United Methodist Church. The 20+ class of 50-80 year olds had been reading To Do Justice: A Guide for Progressive Christians and had

invited me, the author of the chapter “For All Creation,” to join them. I exhorted them to redirect their actions to better reflect their deepest values and identity as Christians (reason #1). But I also encouraged them not to confuse calls for personal discipleship, simple living, or ethical consumerism with what it will take to bring about widespread institutional reform through changes in public policy (reason #2).

We are now at the time of year when many parents are taking their kids “back to school” shopping and when many others with discretionary income are thinking of sprucing up their fall wardrobe.

I’ve blogged previously about the reasons that led me to buy most of my and my kids’ clothes at thrift stores. I want to expand now on a point that I didn’t have the space to develop there—“sweatshop” labor is unfortunately behind much of the clothes sold today.

According to an April 2011 International Textile Garment and Leather Workers’ Federation (ITGLWF) report, they all source from factories in Asia (specifically in Sri Lanka, the Philippines, and Indonesia) that routinely violate even the most basic of labor rights.

It’s not just that none of them provide a living wage to their workers, many of them didn’t even pay the legal minimum wage. What’s more, increasing numbers of workers are being placed on temporary contracts and/or are unable to unionize, forced and excessive overtime is becoming normalized, and workers who fail to meet production targets are not uncommonly punished with mental and physical abuse.

What the report also makes clear is that sweatshop labor is highly gendered. Betwen 71-85% of the 100,000+ workers who comprise the 83 factories surveyed are women, the majority of whom are also under the age of 35. Documented forms of gender discrimination at several of these factories include sexual intimidation, the unwillingness to accommodate workers who are up to 7 months pregnant, the denial of paid family leave or single parent leave even when required by law (e.g., the Philippines), and so forth. 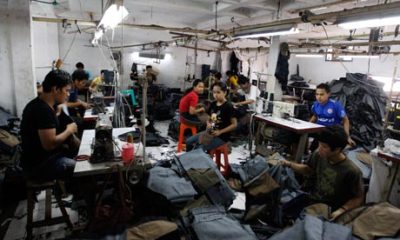 My growing realization that “widespread violations and abuses of worker’s rights continue to be the norm in the industry” was one of the reasons that led me to now buy almost all of my and my kids’ clothes second-hand. I cannot, of course, escape all complicity by going this route, but doing so frees me from contributing to the profits of companies with exploitative labor practices. I could also (or instead) have adopted a strategy of buying new ethically-produced clothes and I commend those who do. What tipped the scales for me the other way, however, was the reality that making new products still almost always uses more of the earth’s resources than does just recycling products that already exist and also doesn’t carry other ancillary benefits I discussed earlier.

Several friends of mine, while impressed with my lifestyle switch, still remain skeptical about the quality of things that one can find second-hand. It’s not that they don’t share my principled concerns about overconsumption, sustainability, and sweatshop labor; it’s that they also want to be drawn in by self-interest.

Since I recognize that most of our actions are over-determined (i.e., we rarely do anything out of pure altruism, we are generally always motivated by both self- and other-regarding reasons), I’ve decided to document my latest thrift store purchase here. I hope to inspire those who don’t regularly thrift to give it a try as well as show those on restricted incomes that an attractive wardrobe is within reach for not very much money.

I’ve included information below on designers and prices. I’ll mention brand names not to gloat, but just to show the surprising range of things that one can purchase second-hand and to appeal directly to those who are label-conscious. 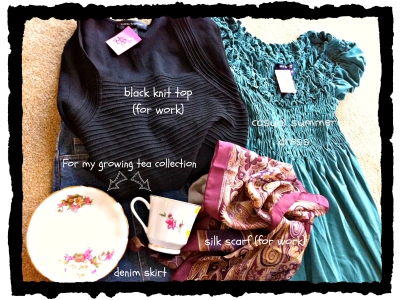 My “score” of the day after about 1 hour of shopping at just the one place was the teacup and saucer. I became a fan of afternoon tea while studying abroad for a stint in college at Oxford. About a year ago, my mother-in-law gifted me several family heirloom teacups and saucers. I’ve been slowly adding that collection ever since through thrifting.

If you look closely, you’ll see that my “new” teacup and saucer are mismatched – the saucer is from one manufacturer (and it’s of lesser quality) and the teacup is from another. While writing this blog, I found the matching (Jason bone china) teacup on eBay, with a “buy it now” price of $20.00. It’s lovely, but I’ll gladly stick to my thrifted substitute. :)

So there you have it. I’ve made my appeal on principled (feminist/human rights/environmental) grounds. But I’ve also addressed self-interest (i.e., if you liked what you saw) by demonstrating how, at least in my case, switching from retail to second-hand need not require a deep sacrifice in time, variety, or quality.

Grace Yia-Hei Kao is Associate Professor of Ethics at Claremont School of Theology. She is the author of Grounding Human Rights in a Pluralist World (Georgetown University Press, 2011) and is currently working on a second book project on Asian American Christian Ethics. She is also co-editing a volume with Rebecca Todd Peters that is tentatively entitled “Encountering the Sacred: A Theological Exploration of Women’s Lives.”

Grace wrote this blog while wearing thrifted clothes and while contemplating her next dumpster dive. She invites you to read more about her adventures in sustainable living on her website.

Like Loading...
‹ The Original Art by Elise M. Edwards
What Do Women Bring to the Interfaith Table? by Rita M. Gross ›