Home › Buddhism › What Do Women Bring to the Interfaith Table? by Rita M. Gross

What Do Women Bring to the Interfaith Table? by Rita M. Gross 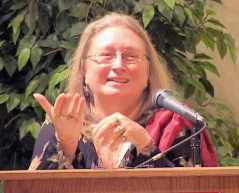 The most important thing that women bring to the interfaith table is our sheer presence. I do not support theories of gender essentialism, which claim that women and men are fundamentally different, that men have a masculine essence different from women’s feminine essence. Regarding most interfaith issues, I do not think that women offer different insights than men could. But because religions have been such a boys-only club, the presence of women at the interfaith table loudly proclaims a critical message that can be proclaimed no other way. Religions are no longer going to be male sanctuaries, closed off to women except for the supportive roles we have traditionally played.

Religions claim to have messages relevant to all human beings. But that claim is hollow when the only people who proclaim the messages are men. The further up the ladder of religious hierarchies we go, the fewer women we find. Highly publicized meetings of world religious leaders are usually devoid of women. How can such gatherings pretend to represent all humans or have messages relevant for all? The messages that emanate from conferences of major religious leaders would have more credibility if half the people at those conference tables were women. The most important thing women bring to the interfaith table is our sheer presence. There is no other way for religions to live up to claims they make about their universal relevance.

When we are present at the interfaith table, we talk about many things. Some of things we say are not distinctive to women. If someone read a transcript without knowing the gender of each presenter, it would be impossible to determine which are women and which men. We also speak of things which most men would be unable to speak about. We speak about the pain of being excluded from something as meaningful as roles of religious leadership. We speak about not having role models who look like us in the religions to which we give our best energies. We don’t have a specifically feminine message, but we do add a feminist voice to interfaith discussions. Only then will every chair at the interfaith table be filled.

Rita M. Gross, Ph.D. is a Buddhist scholar-practitioner who teaches Buddhist dharma and meditation nationwide and who has published on many aspects of feminism and religion.  She received her Ph. D. from the University of Chicago and is Professor of Comparative Study of Religions, Emerita, at the University of Wisconsin—Eau Claire.  In 2005, she was named a lopon (senior dharma teacher) by Her Eminence Jetsun Khandro Rinpoche, head of the Mindrolling lineage of Nyingma Tibetan Buddhism.  Her books include Buddhism after Patriarchy: A Feminist History, Analysis, and Reconstruction of Buddhism, Feminism and Religion: An Introduction, Soaring and Settling: Buddhist Perspectives on Contemporary Social and Religious Issues, and A Garland of Feminist Reflections: Forty Years of Religious Exploration.  She co-authored Religious Feminism and the Future of the Planet: A Buddhist-Christian-Feminist Dialogue with Rosemary Radforth Reuther and co-edited Unspoken Worlds: Religious Lives with Nancy Auer Falk.  Her forthcoming book is Religious Diversity—What’s the Problem? Buddhist Advice for Flourishing with Religious Diversity.  She live in Eau Claire, Wisconsin where she leads a small Buddhist dharma study group.  With her live three Siamese cats and a Border collie.  She gardens extensively and has about five hundred house plants.

Like Loading...
‹ Appealing to Values and Interests in Consumer Choices by Grace Yia-Hei Kao
Living Liminality: Of Thresholds and Dwelling Places by Marcia W. Mount Shoop ›