E Pluribus Unum: The Woman From Africa by Stuart Dean

She’s his only savior.  African in origin, her figure bears witness to her homeland: her hair twisted in dreads, her lips full, her color dark, her chest broad with pendulous breasts, her stomach flat and firm, her legs slender, her feet broad and ample.

The passage above translates the portrayal of Scybale, the black female slave of the farmer in the poem Moretum, that as discussed in an earlier post, is the source of the phrase ‘e pluribus unum.’  It is reasonable to infer it is a self portrait.

The case for Moretum being the work of a woman (and perhaps incorporating a self portrait) begins with the very fact that it portrays a woman so positively.  Portrayals of women in such positive terms in ancient literature are rare.  The details are impressive because they seem so real.  The form of the description manifests a diagnostic technique (head to feet) well attested in ancient poetry.  That includes Sappho’s self portrait (S. 58b), which reads as if composed while standing in front of a mirror, as does this portrait. 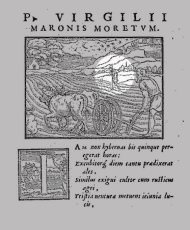 Illustration of Moretum from a 1558 edition of the works of Vergil available here (highlighting: Milenda Nan Ok Lee)

What is particularly telling here, though, is not a physical characteristic but rather the metaphysical characterization–the Latin underlying the word ‘savior’: custos.  The modern legal concept of custody derives from it and is used today in a sense comparable to one of the meanings custos had in Latin (keeper).  Yet, custos also was used in a religious context to characterize a divinity as a protector.  Seneca (Ep. 41.1-2), and then much later, Augustine (e.g., Conf. I.11), used it in just that sense.

Custos, however, is gender neutral, here naturally modified by a female adjective (unica = only).  This spiritual meaning is a legacy of goddess worship: the belief the physical manifests the metaphysical–the goddess within the body, keeping, protecting, it.  The social (objective) implications of such a belief are that each person’s body (of any gender or race) is as sacred as any other person’s body.  The psychological (subjective) implications are that each person must be sensitive to the unique importance of each sense organ–each constitutes a link to, a mode of communion with, the goddess.

The psychological (psychiatric) implications of Moretum are particularly difficult to appreciate today.  Modern culture is distracted by the senses of sight and sound almost to the exclusion of all others.  The virtual world of information technology is one that communicates nothing more than sights and sounds.  Translated back into terms the ancient audience of Moretum might understand, it is the exclusively masculine domain of Plato’s ideals (idea is a cognate of the Greek verb ‘to see’).

By contrast, Moretum emphasizes taste.  Not ‘taste,’ though, as referring solely to what the tongue senses, as it is commonly used in English today.  But rather, taste as the fusion of senses that happens in eating food: what little the tongue’s taste buds actually detect along with the feel, smell, sight and sound of food (see Gordon Shepherd, Neurogastronomy, particularly pp184ff).

The Romans identified that fusion not with the tongue or even the mouth generally, but specifically with the roof of the mouth–the ‘palate.’  That word is used in Moretum to explain the farmer’s motive for mixing his cheese spread.  Notably, ‘palate’ unlike ‘roof’ (or a comparable ancient Greek term) is not a metaphor.  It thus betrays an appreciation of the unique importance of the complex breath passageways and nerves that it can be interpreted as referring to, notwithstanding the lack of anatomical knowledge in antiquity relative to today.

This intuitive recognition by the Romans of the complexity and importance of the palate is further manifested in the unparalleled way in which ‘taste’ effectively became how they defined wisdom (sapientia), using a derivative of the verb ‘to taste’ (sapere).  Implicit in such usage is an association of tasting and speaking that comports with the recent suggestion that language evolved from refining the sense of taste along with cooking.  It is also consistent with the fact that the very existence of Moretum, as a poem about cooking, is predicated on an association of cooking and language.

That is the strongest evidence for female authorship of Moretum.  From an evolutionary perspective, because hunting and gathering food requires strength and speed to a far greater degree than cooking does, it is fair to surmise women were more involved in adopting cooking (and language as a related information technology).  While relating cooking to the refinement of taste is intuitively appealing, relating both to women developing linguistic ability, and ultimately human evolution, is quite speculative based on historical evidence.  Nevertheless, there is an implied narrative in Latin grammar that encourages making just such a connection.  Sapientia is grammatically female.  That is significant and Augustine’s Latin again proves worthwhile to cite: he characterizes the ‘word made flesh’ as the sapientia of God, providing the milk for ‘our infancy’ here on earth (Conf. VII.18).

Milk (cheese) is a key ingredient in Moretum, supplied, albeit symbolically, by the woman from Africa as the goddess Cybele.  Thus, with the help of Augustine, Moretum can be understood as evidence of a tradition of poetry as the milk, the sapientia, of the goddess.  As ironic as it might seem absurd to cite Augustine in this context, there are two reasons to suspect he knew of that tradition from Moretum.  First, he was a close reader of Vergil and, given the manuscript evidence of attribution of authorship of Moretum to Vergil, it is reasonable to imagine he read it.  Second, even if he did not know it as a composition of Vergil, he had a special reason to read (if not memorize) Moretum: the woman he lived with for nearly two decades, the mother of his only child, was a woman from Africa.

There is more to the African connection.  Human evolutionary theory involves much guesswork, but it is generally agreed the most significant developments began in Africa.  It is therefore uncanny, if nothing else, that Moretum portrays a woman from Africa as the custos, the savior, of the farmer. Proof is not possible but there is heuristic value in entertaining the possibility she was the author.  For example, the scientific term homo sapiens, although coined in relatively recent times with a different context in mind, takes on an entirely new, but arguably appropriate meaning.  Homo, like custos, is gender neutral.  Sapiens is a ‘participle’ (part noun, part verb)–formed from sapere.

Like Loading...
‹ Dying For the Triune God by Esther Nelson
Let My People Go! Modern Day Oppression and Exile by Michele Stopera Freyhauf ›