Friday, January 22nd marks the 43rd anniversary of the Roe v. Wade decision of 1973 which provided all women nationwide, for the first time, the right to get a legal abortion for any reason–the right to choose. There are celebrations, and actions for visibility planned throughout the nation. Some of them are listed on the Planned Parenthood website.

On this anniversary,  the stakes for women’s access to legal abortion are higher than ever. Politicians threaten to further restrict access and the U.S. Supreme Court soon will  hear the biggest abortion case in decades. What was life was like for women before legal abortion–and what could it again become? Politicians threaten to continue to take women’s health backwards.

Since the 2010 elections, 288 new laws aimed at restricting abortion rights, closing clinics and harassing medical providers have been passed across the U.S. Clinics receive punishments metered out with regulations that are obviously punitive, and more impediments and obstacles are placed in the path of the woman seeking an abortion. As well, requirements that really make no sense placed in the path of any provider who is still willing and able to perform an abortion for that woman.

There is documented strong public support for abortion (or else it would not be still available at all in the U.S. with the above conditions continuing to imperil its access). Despite this — a political agenda for the far right continues to push for its demise. Usually the only caveat in the net of impending and current restriction is that the woman should be able to get an abortion in the case of rape or incest. Of course, since abortion is a timely matter–and a case of rape or incest is not necessarily timed to coincide with a birth calendar–a court case proving someone was raped or molested (which would need to be done in order to have an abortion in the case of rape or incest) does not make sense in terms of actually giving that woman who was raped or molested the chance to have an abortion. By the time the case was resolved, the woman could have easily moved beyond the window of a safe abortion.

On January 12, 2015, a woman’s trail was set to start, however, she was raped at Vanderbilt University by several football players 19 months prior to the case even coming to trial.

The Roe vs. Wade decision gave women the right to choose up until the time of fetal viability at the third trimester or the 26th week of pregnancy. By a later decision the court affirmed fetal viability as the cut-off point, but added that this might be less that 26 weeks, due to advances in technology. However, all agree that it is preferable to have an abortion as soon as possible, within fourteen to sixteen weeks of pregnancy.

Sixteen weeks is four months. The reality of a rape or incest survivor first going to court to prove she had been raped or child-molested (in which case she is a child and needs to get counsel most often outside her biological family), bringing the case to trial successfully, winning and then getting her obtainable abortion—is more than unrealistic. It is a cruel, inhumane calendar that when broken apart to show its reality—does not allow a woman who has been raped or molested the window in which she can actually obtain an abortion. Rape and incest are crimes—someone has to first prove the crime–this is not easy or often even feasible. For example, in the UK (and similarly in other countries) fewer than one victim in 30 can expect to see her (or his) attacker brought to justice. 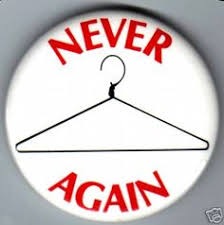 Ninety percent of victims know their attackers. Only 15 percent bring the case to court—most likely because they know the chance of winning is so slim. If the woman is pregnant because of the rape, she has a four month window—the likelihood of trying to obtain an illegal abortion—since a legal one would necessitate her proving she was raped or the victim/survivor of incest—is almost science fiction-like. (I am thinking of the highly restricted lives of the women in Margaret Atwood’s The Handmaid’s Tale.)

In a scenario where a woman has to prove she was raped or a child must prove she was raped/incested in order to get an abortion before the safe time period is up—she will most likely attempt an illegal abortion, in order to avail herself of the possible time window in which it can actually happen. Deaths from illegal abortions resulted in over 5,000 deaths a year during the 1950s and 1960s in the US. Legal abortions have made the death rate .06 in over 100,000 procedures.

A 2013 Texas law headed for the Supreme Court now is a prime example of these types of extremes. The Texas law mandates that abortion clinics meet the same building, equipment, and staffing standards as ambulatory surgical centers. It further requires doctors who perform abortions to have admitting privileges at a hospital within 30 miles of the clinic. If upheld, the law would wipe out 30 clinics across the state, leaving only 10, all concentrated in four metro areas. This restricts access often to those who need it most in rural areas; and limits abortion to those wealthy enough to be able to travel where they need to go to get one.

Such laws obviously do not protect women’s health. They only restrict access.

This week, almost two generations after the Supreme Court legalized abortion, many women will be commemorating the decision by speaking openly about their own abortions. Some live with regret. Some absolutely do not. Most common is that women express thanks that they were able to have “the right to choose.”

Because of the economics of raising children; because of the age of the pregnant woman; because of many factors, the “right to choose” often gives women the opportunity to terminate a pregnancy that was ill-timed, accidental, the result of a crime, etc., and to start a family of choice when it is the right time.

Because of my abortion ten years ago, we have the family that we want today—children that we are able to parent, provide for, spend time with and nurture to the best of our ability, with adequate resources. —Leilani

I am so grateful that I was able to finish business school, take an all-consuming job and have the time to fall in love and build a family when I was (at last) able to be wholehearted. —Stephanie DeVaan

Gloria Steinem (herself a survivor of an illegal abortion pre Roe v. Wade) has said that we can never walk away from the abortion rights table. It will always be our biggest concern, because if we don’t have the right to choose, we don’t have our lives. One in three women at some point in their lives need an abortion. Our right to choose is the right we need to have our lives.

A female Irish cabbie in New York famously told Gloria and her then speaking partner Flo Kennedy, “If men could get pregnant, abortion would be a sacrament.”

Women get pregnant—often without their consent or control.  A safe, legal abortion may just be our necessary sacrament.

Marie Cartier. Dr. Cartier has a Ph.D. in Religion with an emphasis on Women and Religion from Claremont Graduate University.  She is the author of the critically acclaimed book Baby, You Are My Religion: Women, Gay Bars, and Theology Before Stonewall (Routledge 2013).  She is a senior lecturer in Gender and Women’s Studies and Queer Studies at California State University Northridge, and in Film Studies at Univ. of CA Irvine. She is also a published poet and playwright, accomplished performance artist, scholar, and social change activist. She holds a BA in Communications from the University of New Hampshire; an MA in English/Poetry from Colorado State University; an MFA in Theatre Arts (Playwriting) and an MFA in Film and TV (Screenwriting), both from UCLA; and an MFA in Visual Art (Painting/Sculpture) from Claremont Graduate University.  She is co-chair of the Lesbian-Feminisms and Religion session of the national American Academy of Religion and co-chair at the regional level of the Queer Studies in Religion session, founder of the western region Queer Caucus, and a perma-blogger for Feminism and Religion. She is also a first degree black belt in karate, Shorin-Ryu Shi-Do-Kan Kobayashi style, and a 500 hour Yoga Alliance certified Hatha Yoga teacher.