Puff the Magic Dragon & the Loss of Magic by Susan Morgaine 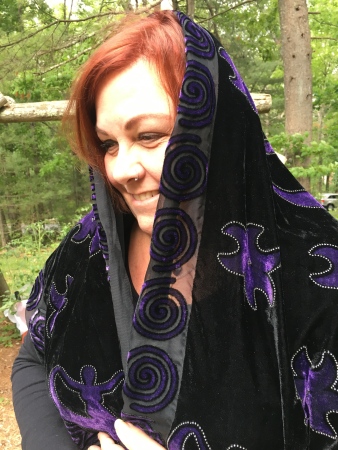 Did you believe in magic?

Did you once believe in fairies, leprechauns and and flying dragons? Did you believe that if you climbed a tree to the uppermost branches, you could touch the sky?

Do we need magic?

As the country finds itself reeling from the proclamations of anew administration, I have found myself, like so many others, in need of comfort. One of the places I find comfort is music. There is the music of ritual and meditation, the music of dance, the music of heartbreak. It can energize and uplift; it can soothe the hurt away, it can take you to distant lands.

After the experience of the Women’s March on Washington, I chose the protest music of Peter, Paul and Mary. I found myself listening to “Puff, the Magic Dragon”, an old favorite. I have listened to this song many times through the years, but this time, I understood it in a completely different way.

As I listened, the tears began to flow. I had finally come to the realization that this song is about the loss of magic. Jackie Paper was a little boy, one who believed in magic. With magic there can be wonderful creatures such as dragons, and painted wings and giant rings. But Jackie Paper grew up, and when he did, he lost his belief in magic and Puff, sadly, lost his lifelong friend.

When we are small, we believe in magic because the world IS magic. Everything is new and bright and wonderful! But soon, much too soon, we are told to grow up for there is no magic in the world; giant rabbits who give out candy and big, jolly men in red suits who give out presents are not real. So, the sense of magic and wonder we held so dear is outgrown, part and parcel of being an adult. We don’t realize at the time how much of a sadness that really is, not only for us as individuals, but for the world at large.

Many of us, lately, have been feeling a loss. We believed in one thing; and another thing came along and stole it away from us. Our belief was a form of political magic and it failed us.

In reality, though, they, too, are feeling this loss, there are those who never did lose that sense of wonder and magic. Women who follow the Goddess, as well as other pagans, are in a unique position because we know there is magic still in this world. She IS the magic.

There is one last thing. Jackie Paper grew up and stopped believing in magic, stopped believing in Puff, The Magic Dragon. In a short story written by the wonderful Jennifer Roberson*, Jackie, now a grown man known as Jack, travels in sadness and desperation, in need of his childhood friend, in need of the magic that was once such an enormous part of his life. As the story comes to an end, once again the tears flow, as Puff comes out to see his lifelong friend, and reaches out with his long tail to gently touch Jack’s foot in greeting and Jack replies, “Hello, Puff”.

Thus, bringing him back full circle to his belief in the magic he so desperately needed, that we all need.

Susan Morgaine is a Daughter of the Goddess, Witch, Healer, Writer, Yogini, as well a an IAW Certified Women’s Empowerment Coach/Facilitator. She is a current columnist at the online e-zine Pagan Pages, as well as Motherhouse of the Goddess. Her work can also be found in the Girl God Anthologies, “Whatever Works:
Feminists of Faith Speak”, and “Jesus, Mohammed and the Goddess”, and the Mago Publications anthology “She Rises, Volume 2”. She has been featured in SageWoman and Jareeda magazines, as well as the Sisterhood of Avalon’s online journal, The Tor Stone. Her blog can be found at ShaktiWarrior.wordpress.com and she can be reached at SusanMorgaine@comcast.net

Like Loading...
‹ Join the Rebellion by Jessica Bowman
Renewing Our Spirits in the Wilderness of Our World by Carolyn Lee Boyd ›