Welcome to the resistance, Feminism and Religion family. This month is Gay Pride Month in many cities, including mine—Long Beach, California—where we just celebrated our 34th gay pride parade and our annual “Dyke March.”

This blog is primarily a photo essay of those events and past pride events I have been in—a celebration of pride and gay family during the spring months which commemorate the first televised gay uprising against police harassment by the gay and lesbian and transgender family on June 28, 1969 at the Stonewall inn in New York City, NY.

The very next year, 1970, Los Angeles celebrated and commemorated that action with its first pride march, which was also the world’s very first pride march. If we were going to be in the street anyway, Angelinos decided to make it a party.

Our march will be taking place in solidarity with and on the same day as the National Equality March for Unity and Pride in Washington DC. …in 2017 we need to return to our roots and protest so that those who would roll back our hard won human rights are put on notice that we will not stand idly by. This is the founding premise of Christopher Street West. This march is for those who believe that America’s strength is its diversity. This is not a democratic or republican march. It is not a red or blue march. This is a red, white and blue march meant for anyone who cares about human rights. On Sunday, June 11th our unique, diverse, inter-sectional voices will come together in one harmonized voice. 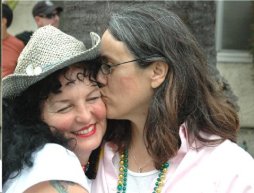 Me and my wife when we first met. (Photo by Angela Brinskele)

Remember: it is only recently that the LGBTQ+ community could bask openly in the sunshine. That is part of the joy and wonder of a Gay Pride Day. For so many years we were considered mentally ill, the nation’s highest security risk, sinners and felons. The only place we could congregate, even if unsafely, was in the gay bars. Gay bars were our sacred spaces, our churches, our true homes. This is the thesis of my book. Those spaces gave us so much in terms of being our first public meeting spaces, 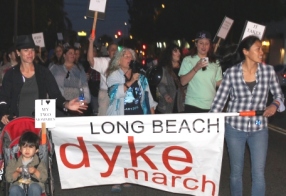 but they were also dangerous and truly places in the twilight where often gay folk were afraid to even let each other know their real names. Being able to be “out and proud” is a post-Stonewall and Gay Pride reality, and one that none of us want to roll back… except the current administration. Consider this article among many; the LGBTQ+ assault by the administration of Pence/Trump is already underway.

What follows are photos from this most recent and past years’ Gay Pride celebrations, including Dyke Marches. Come out; come out, wherever you are. #RESIST. May there be a fabulous, powerful show of resistance June 11th, and I look forward to sharing more photos with you next month. 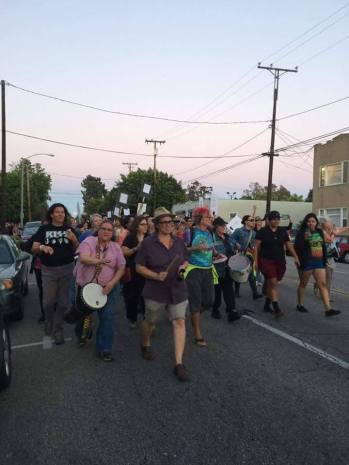 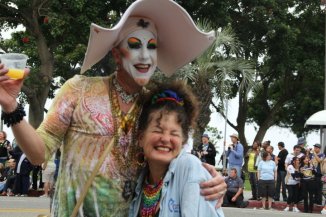 Me with Sister of Perpetual Indulgence; her a lot taller than me! 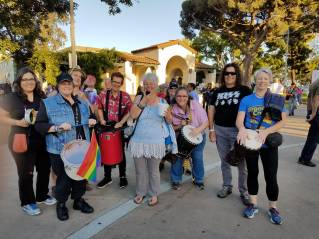 Dr. Marie Cartier has a Ph.D. in Religion with an emphasis on Women and Religion from Claremont Graduate University.  She is the author of the critically acclaimed book Baby, You Are My Religion: Women, Gay Bars, and Theology Before Stonewall (Routledge 2013). She is a senior lecturer in Gender and Women’s Studies and Queer Studies at California State University Northridge, and in Film Studies at Univ. of CA Irvine. She is also a published poet and playwright, accomplished performance artist, scholar, and social change activist. She holds a BA in Communications from the University of New Hampshire; an MA in English/Poetry from Colorado State University; an MFA in Theatre Arts (Playwriting) and an MFA in Film and TV (Screenwriting), both from UCLA; and an MFA in Visual Art (Painting/Sculpture) from Claremont Graduate University.  She is co-chair of the Lesbian-Feminisms and Religion session of the national American Academy of Religion and co-chair at the regional level of the Queer Studies in Religion session, founder of the western region Queer Caucus, and a perma-blogger for Feminism and Religion. She is also a first degree black belt in karate, Shorin-Ryu Shi-Do-Kan Kobayashi style, and a 500 hour Yoga Alliance certified Hatha Yoga teacher.