Home › animals › When the Cranes Come by Sara Wright

When the Cranes Come by Sara Wright

I stood deep
in a toad hole
slinging mud
at twilight
when the sky
turned lemon
and gold.
They arced
over
my head
in pairs,
loose aggregations –
it seemed like thousands
crying out,
crossing
the river.
Ensouled.
Spirits defying
image or word.

I shivered.
Tears rose unbidden
Who calls them North?
I call out “I love you” –
Believing they know.
A crescent moon listens
cradled by nightfall.

To witness
a sky full
of Sandhill
Cranes
dark red heads
ebony eyes
long graceful necks
curved gray wings
dripping black legs
descending out of the blue
to roost
along this
winding Red
Willow River,
gracing fields
of depleted grain
is a Gift
given
at midnight;
the moment
before
departure.
This turning
of the wheel
births
days full of light
and an empty
sky bowl.

Haunting cries
in my ears
ring in the silence
of beloved crane absence
for another year.

As almost always (summer is the exception – no matter where I live I tire of too long days and too much heat) the shifting seasons bring me to an uncomfortable edge of personal awareness: It is hard for me to let go. Nature orchestrates this truth to me through her individuals… in this instance it is the leave – taking of the cranes that captures the essence of how loss operates in me… At first I resist. When I let go, I feel bereft. Eventually, I reach a state of acceptance.

This morning someone made a comment that said in effect that poetry is about extending human consciousness – making the unconscious conscious. I dislike the word “consciousness” because it conjures up new age – know it all – androcentric thinking – but when I substitute “awareness” for consciousness I know the sentiment is true. Poetry explicates feeling…it brings darkness into light.

When tears blurred my eyes last night I was grieving impermanence… the only constant is change, and Nature is my compass directing me towards “True North,” a state of “becoming,” my home. Not a place, but a state of being. It is astonishing to recognize that I have been seeking embodiment of this truth for the last forty years and is probably the main reason I have always lived my adult life near bodies of water.

To seek impermanence as a way of being is what it means to flow with the river, or float down a stream. What becomes crystal clear is that this way of being is just the opposite of being human (!) – to be a person is to have boundaries, to be bound by soul and skin. Allowing each of our boundaries to dissolve into all that is, and was, and will be, is a stretch for every human who lives, whether they preach flow or not. Dissolution means an end to what is, creating room for death to enter the river of life as a friend, even as a lover, and one who celebrates change. Spirit is part of every aspect of life.

In these days of Climate Change the Great Dying is the center core of each of our lives, acknowledged or not. The loss of non – human species will probably lead to our own eventual demise – not necessarily a bad thing, since humans have made such a mess of things. (I say probably because the future might be an unknown – what I do know is that things don’t look good from where I am standing).

But meanwhile, we have now, and the present is filled with beauty, awe, and wonder. For me the Cranes  embody all these qualities… after they leave other wonderful creatures/elements will take their place, perhaps toads or frogs…maybe even a sky full of rain…

Cranes are Elders in every sense of the word, ancient relatives and they continue on, some adapting, others following unknown scripts or patterns that stretch back to antiquity. The way they live, migrating out of seasonal necessity, returning to home – places, celebrating through community and song in life and death is a way of being that embodies flowing like a river… And for that, their magnificent beauty and inherent wisdom born of genuine community, I thank them.

Blessed be the Cranes…

A few words about the natural history of these birds…

Sandhill Cranes have been in their present state for 30 million years (perhaps modeling to humans what genuine community might consist of).

Most recently these birds have been a presence in my life since last November when they first arrived, I originally thought for a brief stopover, before moving south to places like the Bosque del Apache to spend the winter. When I first came to New Mexico two and half years ago I was astonished and bewildered by their haunting collective conversation even when I couldn’t see them which was most of the time… But this year the cranes not only arrived but many decided to spend the winter here much to my great joy, perhaps a result of Climate Change which is shifting their migration patterns, in some case dramatically.

For example, I recently learned that Sandhill Cranes have been seen in parts of Maine. Their normal migration routes take them from Mexico as far northwest as Siberia into the Canadian Shield and Alaska to breed with one major stopover in Nebraska at the Platte river (another group that settles further northeast makes a stop in Mississippi) where 600,000 cranes meet to rest themselves before making the last leg of their seasonal journey. In the fall all northern populations will make the trip south for the winter probably because of inclement weather and lack of food.

However, some groups spend their entire lives in one place like Florida, others are no longer migrating further south than Tennessee, although these too fly north in the spring. It is unusual to have cranes living in Northern New Mexico, although I understand that a few have sometimes remained here through the winter.

Not in these numbers though. When I first began to hear the cranes I never imagined that I would start to see them or watch them make gracious descents into a neighboring field at all times of the day, every day. But this is a gift that this winter has bestowed upon me, and one I have never taken for granted.

Beginning at dawn I listen for the first cranes murmurings, and most morning around 7 AM I see the first flock flying over the river, followed by others, often occurring later. One of the most fascinating aspects of Sandhill Crane behavior is the way they seem so intent upon communal living. They take to the air in pairs, small groups and huge flocks sometimes flying one way, then suddenly wheeling around in the sky to soar in the opposite direction! They never fly in formation like geese do (no one appears to lead), and yet they are in constant communication with each other, which currently begins about a half hour before dawn.

This morning a friend sent me an article about the cranes arriving earlier than usual for their seasonal stopover at the Platte River. I am not surprised. For about two weeks now the sense that migration will soon be under way surfaces each time I see or hear the cranes. I think my body already knows what’s coming… 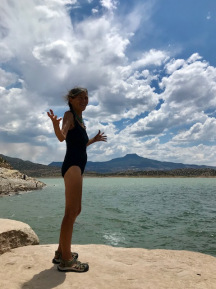 Like Loading...
‹ Making a New Home: It’s Not So Easy by Carol P. Christ
Who is God? by Gina Messina ›