Home › Art › In A Sacred Grove by Laurie Goodhart

In A Sacred Grove by Laurie Goodhart

I’ve always been an artist-painter, with an innate drive to explore the mystic and ethereal. Concurrent with artwork I minored in Philosophy as an undergrad, then farmed (certified-organically) with animals and plants for thirty years, all the while accumulating a fine archaeology reference library.  The farming grounded the other endeavors in a way that probably nothing else can. Scraping by in the best of years, and always subject to the vagaries and perils of natural forces, one learns that there is no other way forward than to surrender, constantly alert to the complex nuances of Earth and Life.

Even though no longer farming, I still carry on in this way. A couple of weeks ago I participated in a three-day regional Artist’s Open Studio Tour, hosting the general public during some of the most sweltering days on record in our area. Bringing people into the un-air-conditioned studio to suffer was an awful prospect, so I hung forty large paintings and twenty tiny ones in a large shady area that I’ve thought of as The Sacred Grove, since acquiring this property five years ago.

A sacred grove because it is bordered on its long side by a small stream that emerges from a spring at the uphill end. Further uphill from this area is a columned platform that the previous owners erected and dubbed, The Parthenon.  These wonderful features dovetail exquisitely with the fact that for the past twenty years my artwork has focused on what I call Remnants And Residents Of A Lost Sanctuary Of Aphrodite.

So, simply being practical and responding to the heat, I hung the work on the trees. After two hours of rushing about early the first morning, rearranging and securing canvases against the breeze, I stood back to see what still needed help.  I was stunned. 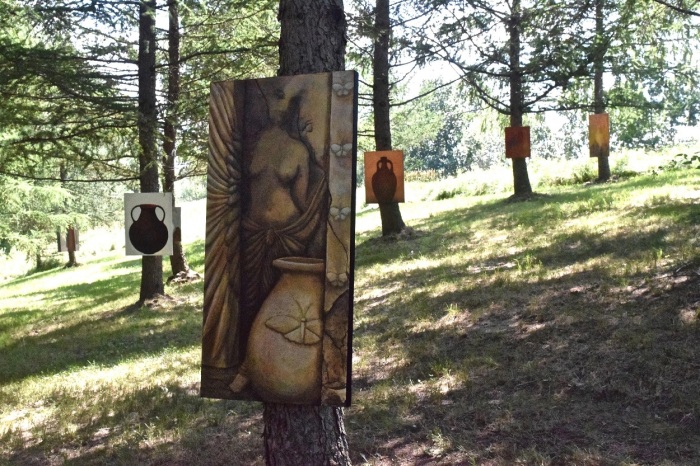 Also being what a friend calls Chronically Productive, it’s not normally my way to pause and appreciate what I’ve accomplished; the momentum is ever-forward toward manifesting the next few burning ideas.  I’ve had scores of gallery shows, this was not the same thing at all. The paintings were layered; they danced as my perspective shifted; they struck up interesting conversations with each other as if it were a party. The conversing canvases regrouped when their apparent proximity changed as I wandered between the trees. 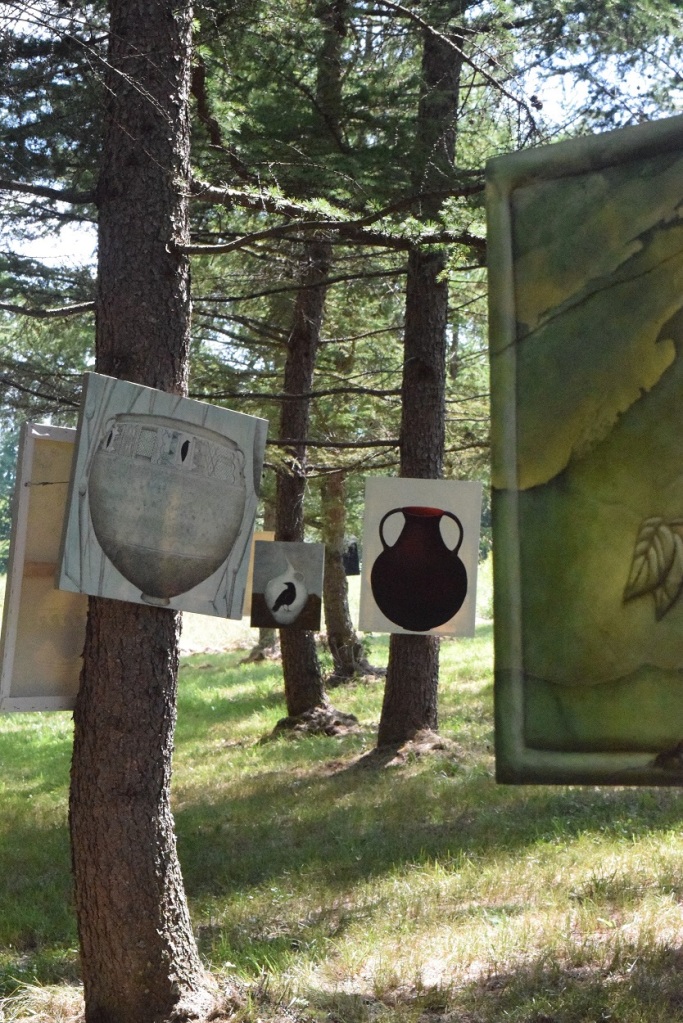 The paintings are already either imaginary offerings to Aphrodite, or renderings of the deity or one of Her priestesses.  But suddenly all were alive, palpable, and the trees were so clearly relishing the situation that pretty much everyone who visited was in awe. To heighten the sense of blessing, it was almost 20 degrees cooler in the grove then just steps away, in the sun or the house.

The paintings that remained at the end of the weekend did have to come down to stay safe from future weather, but now, two weeks later, the previously perfect-unto-itself grove is still looking bereft. Something magical happened, for which I don’t claim credit. As mentioned initially, I  long ago gave up thinking I was in charge. I’m writing here to share a small story of magic and wonder still spontaneously happening in this darkly rational society, and also some photos of the adorned Sacred Grove itself. Wish you all could have been here too.

Laurie Goodhart lives, paints, and gardens in upstate NY. Clearer views of the Remnants and Residents are at laurigoodhart.net and some brief musings they’ve inspired are at sustenanceforawildwoman.com