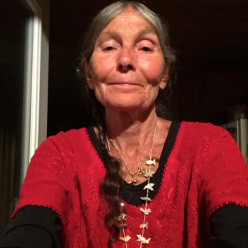 I hardly knew you.

We always met at
the meadow,
the one alive in
your imagination.
Last fall you told me
how beautiful
it would look
when wildflowers bloomed.

Tod was busy leveling
the earth, smoothing
her for re- creation
with a machine
that puffed like
a dragon.

When he mowed down
the sumac I winced.
So much winter forage
for deer and birds
no longer a gift.
I missed the
blushing wine berries,
fading ochre leaves.

But we agreed on
everything else.

Like you,
I too was conjuring
up a wildflower spring.

The soil was rich,
swelling
with seed..
I knew nature
held other surprises,
for you had created a “field”
of possibility, allowing Her
to take the lead..

And sure enough,
after the snow disappeared
Dandelions sprang up
splashing the earth
in gold as wild bees
gathered for the feast.
I picked a few tart leaves
for my salads.

When the
Indian Paintbrush
flooded the meadow
in lemon, bittersweet
orange, and red,
I met you
on the road.

“Aren’t they magnificent?”
You asked me,
blue eyes intent.
Your face lit up
when I agreed.

Soon after,
you were gone,
flying on the wings
of dandelion puffs.

I wondered where
you might land.
Just in case you are
sailing these skies
I keep watch for you.

I note the abundance
of bright eyed daisies.
Black eyed susans
burst forth in the sun.
Pungent yarrow is peppered
by fuchsia pink.

Each day
when I walk by
I feel that some part of you
lives on,
watching over
the Meadow
you brought to life.

Working notes:  Reflecting on the bridges that were crossed at this gathering.

This piece of prose was written for a memorial service that was held at 8 AM in the morning outdoors at my neighbor’s house. Just a few of us gathered less than three weeks after Peter’s death and this event, which also functioned as a bridge into the future for some of us, will stand out in my mind as the most peaceful memorial service I have ever attended. Surrounded by fruit trees, astonishing mountain views, extensive gardens and glorious fields we acknowledged the loss of a kind man that I barely knew, although I am becoming friends with his widow. By attending this gathering I was freed from the past – a blessing I could never have expected and one that closes a circle for me while allowing me to cross yet another bridge into the future…

For so many years I was friends with the former owners of this spectacular piece of property, walking through their woods, visiting the pond, soaking in the beauty of the flowers… I loved those two. He was a woodsman and a hunter, who loved trees and the animals he killed –  forever an enigma – I still respected him. She was a wealthy Victorian Matriarch who expected others to serve her and we did, gladly. When she chose another woman as her new friend and distanced herself from me – ironically I had introduced this woman to her – I became the third wheel – an “expendable” friend – this, after 10 years of what I had considered to be enduring friendship. Devastated, and unable to deal with the anguish, I let go… all that was left was a passionflower mourning…

A year later, (and a number of other times thereafter) I attempted to re-kindle a little of what had been lost, but she would have none of it. When he died on a cold winter solstice night, the deer antlers he gave me fell off the mantlepiece. She slipped away a few years later but not before raping her land, butchering a whole forest for even more money. An atrocity committed against the earth that had nurtured her for so many years…

For Betsey, Peter’s widow, this gathering created a bridge into a future she is ready to inhabit. Peter’s dying was protracted and she was able to stay emotionally present for the entire process. “Peter died just the way he wanted to” she told me a few hours after his death in their home. As a result of his readiness to let go (an attitude I frankly envied), and her ability to be emotionally present for him throughout his dying allowed both of them to move into new lives.

At the gathering I spoke of how nature demonstrates that there is no death that is separated from new life – the process is an endless round. Peter’s Meadow was a perfect example – just last year the old house had burned down giving Peter the opportunity to dream and eventually co – create a beautiful wild meadow that is presently full of summer flowers.

When someone referred to the richness of the meadow I exclaimed “Life is bursting out of every “dead” decaying tree stump; there is no death – life and death are one” using my favorite fallen tree replete with its entire ecosystem as another example.

The second I spoke these words I felt the truth of what I had said in my body; specifically in my lower belly. It was only a momentary spark but it was definitely a physical sensation. I believe another bridge is being forged…

I am blessed to be developing a friendship with another woman on land that I have loved for so long. I am welcomed, appreciated for my compassion and insight, my ability to see what others cannot. I can be who I am with Betsey. Every conversation I have with her leaves me gratified because I am seen and heard. I don’t have to get stuck in projection because she communicates her feelings and her understanding to me directly through her words and through her body. There is no room for projection or doubt in this kind of exchange. It should come as no surprise to the reader that Betsey has a close relationship with animals, especially her dogs. Dogs are our closest animal familiars tuned to frequency of intimacy that is truly astounding.