Reading Plato’s Allegory of the Cave as Matricide and Theacide by Carol P. Christ

When I read Plato’s allegory of the cave as an undergraduate, I was told it had something to do with the idea that the “form” of a table is more “real” than the table itself. I must confess that I had no idea what this could possibly mean.

As a graduate student, I struggled with philosophical and theological ideas rooted in Platonism.  Rosemary Radford Ruether named the flawed worldview created by a “classical dualism” that separates mind from body, spirit from the world, rationality from emotion, and male from female.  Her ground-breaking essay “Mother Earth and the Megamachine” clarified the difficulties I was having. 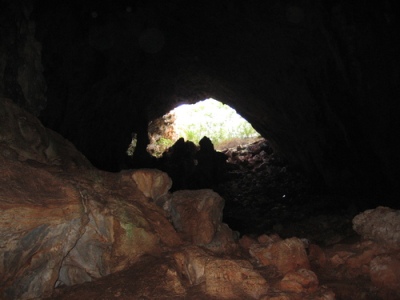 Western philosophy, described by Alfred North Whitehead as a series of footnotes to Plato, had gotten off on the wrong foot. At its very beginnings, western philosophy had attempted to sever mind from the body and nature, alleging that “man’s true home” was not life in the body on planet earth. Platonic ideas spawned the ascetic movements of late antiquity and early Christianity.  They are also at the root of the modern scientific worldview that alleges that the body and nature are “mere matter” “without soul” to be entirely controlled by the rational minds of men.

Ruether pointed out that women were identified with the despised body and nature and the realms of emotion and feeling.  She called upon feminists and ecofeminists to restore the severed connections between mind and body, spirit and nature, reason and emotion, male and female.  These ideas have informed all of my work.

It was not until I began to write She Who Changes that I realized that the Platonic worldview can accurately be said to be rooted in matricide (mother murder) and theacide (Goddess murder).  I am not exaggerating.

In the allegory of the cave Plato describes human beings as prisoners shackled to the walls of a cave in such a way that they cannot see the light at its mouth, but only the shadows flickering on its inner walls.  Socrates himself interprets this allegory for his student. Its meaning, he says, is that the light of reason is shackled by the “prison house of sight.” The meaning of this, we are told, is that the world we see—the physical world we sense through our bodies—is not the real world. The “real” world is an “intellectual world,” a world of ideas untainted by the body or nature, and to this world Socrates asks his pupil to turn.

Like Socrates, many teachers ask their students to question conventional ideas about the meaning of life. As a feminist teacher, I ask my students to question the inevitability of patriarchy. Am I not following in Socrates’ footsteps?  Why then do I insist that the allegory of the cave is matricidal and theacidal?

On the Goddess Pilgrimage to Crete, from which I returned only a few days ago, we descend into caves where the ancient people of Crete lived, buried their dead, and poured libations to the Source of Life.  We understand that the ancient Cretans honored mothers as the source of human life and Mother Earth, Sky, and Sea as the Source of All Life.  For them caves were the womb of the Mountain Mother, place of emergence, return, and transformation.

When they lived in caves, people sat around fires and told stories of their ancestors.  Surely they saw the shapes of deites, humans, and animals who featured in their stories in the lights and shadows cast on the stalagmites and stalactites and the cave walls.  This tradition must go back to the origins of human life; it is clearly documented in the Upper Paleolithic (50,000-10,000 BCE) .   As this painting of a pregnant horse shows, the rituals of the Upper Paleolithic were not only “hunting magic,” but also expressed a desire to communicate with the Source of All Life, human and animal. 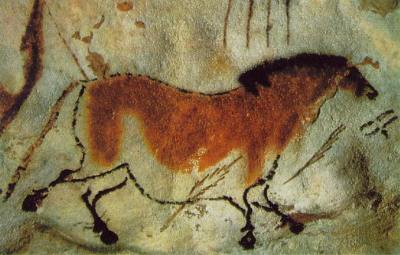 In light of this, it seems certain that Plato did not “just happen” to choose a cave as the location of his “prison.”  Like the Genesis story in the Bible, his was a “tale with a point of view.”  The point of view Plato was challenging was the view that this world is our true home, that we should enjoy life in the body, and that we should honor the mothers and the Mother who have have given us life.  The view he was propounding was that this world is not our true home, that we should rise above the body, and that we should honor male teachers and the light of transcendent reason.  Because “the language of the Goddess” that connected caves with the womb of Mother Earth was still known in his time, Plato did not have to “spell out” the implications of his comparison of the cave to a prison any more than the authors of Genesis 2-3 had to “clarify” for their readers that trees, snakes, and women were considered sacred in the religions they were trying to eradicate.

In order for his new view to take hold, Plato had to dethrone the mothers who birth us into life in the body and the Mother of All Life from whose womb all physical life emerges. Plato teaches us that rather than feeling gratitude for the gifts of birth and life, we should learn to distrust and despise the body and nature.  He tells us that we should not honor the mothers and the Mother who birth us into this world, but rather the teachers who offer us a way to escape it.

Matricide and theacide stand at the very beginning of our traditions.

Let us learn again to bless the Source of Life and the circle of birth, death, and regeneration!  Let us cherish our life on planet earth. 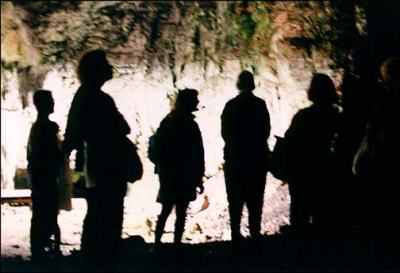 Carol P. Christ , a founding mother in the fields of women and religion and feminist theology, has just returned from a Goddess Pilgrimage to Crete. The next tours are in spring and fall of 2013. Carol’s books include She Who Changes and Rebirth of the Goddess and the widely used anthologies Womanspirit Rising and Weaving the Visions.

Like Loading...
‹ Maeve (aka the Celtic Mary Magdalen) on Elections, transcribed by Elizabeth Cunningham
Sexist Responses to Women Writing About Religion by Sarah Sentilles ›