Home › Bible › Purim and the Value of Courage by Ivy Helman

Purim and the Value of Courage by Ivy Helman

The Jewish Festival of Purim and the book of Esther offer us an opportunity to reflect on the value of courage from a feminist perspective. The online Webster’s Dictionary defines courage as, “mental or moral strength to venture, persevere, and withstand danger, fear, or difficulty.” In religious discourse, courage is often categorized as a virtue or a moral principle. Aristotle (384BCE – 322BCE), one of the most famous of the virtue ethicists, believed a virtue like courage should be practiced according to the mean or the right amount. Too much courage leaves one rash, possibly too reactionary and hot-headed while too little makes one cowardly and weak, but just the right amount in a given situation leads to moral behavior. Virtuous living leads to happiness, or perhaps is itself happiness, for Aristotle.  Yet, as a feminist, I understand the worth of courage differently.  To me, the value of courage lies not in individualistic gains nor in personal happiness but in its use toward achieving justice and equality in society.

In the book of Esther, we read about Queen Vashti and Esther both of whom demonstrate courage. (There are many feminist commentaries on the inherent sexism of the book of Esther. While I acknowledge the need for such critique, I am not approaching Esther from this perspective as much as I am approaching it from what we can gain from the actions of the women in the story.) As the book opens, King Achashverosh asks Queen Vashti to parade her beauty at a feast for him and his guests. She refuses to be paraded and thus objectified. Men in the king’s royal court react harshly telling the king that if he lets her get away with such disobedience other women will surely follow suit. This is surely problematic for the kingdom as well as their households. Vashti is replaced as punishment.

Not surprisingly, the king chooses another wife by hosting a beauty contest and declares that the prettiest woman will be the next queen. Esther is forced to be part of the spectacle and is ch

osen to be the next queen despite her lack of make-up and other beautifying products. Throughout the contest and her coronation as queen, she never reveals her ethnic origin to Achashverosh or the others. This is part of the plot to come. Meanwhile Haman, a man with virulent anti-Jewish tendencies, rises to a high position within King Achashverosh’s court and offers money to the king in exchange for permission to kill the Jews. The king tells Haman to keep his money and that he can do whatever he wants to the Jews. When Mordechai, Esther’s uncle, finds out about the plot, he urges his niece Esther to tell the king she is a Jew. Esther hosts a feast for the king at which time she shares her ethic heritage with him by telling him he is going to lose her as his wife if Haman is permitted to have all the Jews killed. The king responds to this news by hanging Haman, giving Esther Haman’s estate and overturning the decree against the Jews. He even permits any Jew who is attacked the right to kill their attackers.

The courageous actions of these two women could be applied literally to feminism. Queen Vashti’s refusal to be objectified speaks to feminism’s stance against the sexual objectification of women. Esther’s actions speak to the contemporary need to confront continuing anti-Semitism in society and (even) in some feminist circles.

While these are extremely important direct applications, there is a more profound feminist lesson here. Vashti refuses to be treated subhuman showing respect for herself and her body. Esther comes out as a Jew to save the lives of other Jews. Both of these women, through courageous actions, make life better for themselves and others.

We, feminists, do this all the time. At feminismandreligion.com, our courageous acts include standing up to sexism, racism, classism, homophobia and discrimination in all kinds, speaking up for a religion’s liberatory potential, creating new feminist ritual and/or religions, using female pronouns for G-d, working for women’s control over their own bodies and joining the cause for women’s ordination to name just a few. Other courageous actions consist of coming out as LGBTQ or an ally, staying strong through cancer treatment, falling in love again after much hurt, going back to school, changing careers, converting to a new religion and/or becoming a parent.  Some of these courageous actions improve our lives so that we can continue working for justice while others confront justice and equality head on.  Both are important.  It also seems necessary to mention that, just like the cultivation of a virtuous life doesn’t seem to matter to Vashti and Esther, neither are we often motivated by virtue. While inner courage may inspire us and propel us forward, 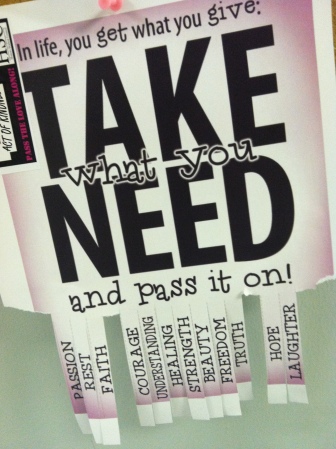 we act courageously in order to improve our lives and the lives of others. Justice, equality, security and opportunity are the “good life” we strive to make happen.

Being courageous isn’t easy. In fact, courageous actions can be scary! It is (probably) impossible to face most situations requiring courage without some amount of trepidation. I’m sure both Vashti and Esther weren’t completely void of all fear either although because of the patriarchal mindset that wrote Esther, we don’t really get to know how they felt. Nevertheless, instead of ignoring emotions, feminism asks us to be embodied persons. Therefore, a feminist perspective on courage must acknowledge that all courageous actions incorporate some level of fear. Perhaps, no one sees this fear, yet sometimes one acts with tears rolling down one’s face or another person visibly shakes as they act courageously. Is the act any less courageous with tears or shaking than with a cool outer confidence? I don’t think so. In fact, it may make the action all the more courageous because then we are acknowledging our body’s reaction to what our will and our commitment to justice compels us to do.

The value of courage is that it supports us in this struggle for justice and change because it allows us to confront scary situations, speak up to powerful people and stand up for our beliefs. Queen Vashti and Esther are two great examples of courageous women whose actions fundamentally altered the fate of Jews in Persia. Their actions illustrate the value of courage and the way courageous actions change lives and help create a more just society.

Like Loading...
‹ Painting Saraswati By Angela Yarber
Our Mother Whose Body Is The Earth by Carol P. Christ ›