Freedom and Faith by amina wadud

In September past I travelled to Zanzibar with a long time friend from Singapore. I intentionally planned to visit the places where other Africans, like my ancestors, were bought, sold, and held in waiting like fish in the fish market.  The slave trade in east Africa is linked to this historical island, which was like a Fed Ex hub: a central location to facilitate the transfer of slaves—stolen, captured in war, kidnapped, or bought elsewhere to be traded, from there to parts of Persia and Arabia.

I explained to my friend, EVERY African-American identifies intimately with slavery.  We talk as if it were only yesterday.  We say “we,” as though speaking of relatives in another city or town. We also say “they” about slave masters and traders, about the over seers who beat us, the men who raped our foremothers and sold off their children, the few who taught us to read in secret, or turned a blind eye at our efforts to escape. Yet, I know of NO WHITE person who identifies with their history as slave masters.

My intention was to perform some simple ritual interface at the markets and holding cells. I had not planned any details, I had only reflected on the value of sacred expiation and the reality of living blood still flowing because my ancestors gave their blood, sweat, and tears. Perhaps my blood would mingle with the spirit of the blood of my ancestors.  At least I hoped I could, through some selected prayers or liturgy, release anger, pain, and humiliation in exchange for a life of freedom. I owe my life to them and I wanted to consciously renew the bond and then, like Nelson Mandela’s walk to freedom, to LET it go. To honor my ancestors I must live fully and in freedom.

As we walked throughout Stone Town to the present day market of fresh produce, fish and oddities, I thought it was no coincidence that the slave market was just around the corner.  This living market continued unbroken all the way back in time when human beings were also bought and sold.  An Anglican Church has been built over the actual site of the slave market leaving only the original holding cell as a memorial.  Included is a statue depicting Africans standing stiffly

with chains on their necks.

As we wound our way down the narrow stairs to the holding cells, our guide gave details, explaining that the cells were built below sea level because a pathway that cut between the stone beds could wash out the excrement at high tide.  Women and children were kept in one room, men in another.  I hardly heard what he was saying as the tears began to build up in my eyes.  What must it have been like for my people…?  But then, I was stopped short—my friend more quickly was wiping her hand over her cheeks.  She told me, “I could feel the souls…”  I thought how odd it was that one whose people never enslaved another and was never enslaved could feel so deeply and so quickly.

The next day, we took a boat off the southern coast where dolphins swim freely in large schools.  I have wanted to swim with dolphins for some time.  As recent as the previous month I learned of holding places for them in Bali while I was visiting there.  I did not manage it then.  Just before my trip to Zanzibar I chanced upon an award winning documentary about the trade and slaughter of dolphin called The Cove.  It forever changed my heart about captured dolphins for human entertainment.

In their natural environment Dolphins swim in schools—or should I say they play in schools?  When they are not held in water pens, they can travel as far as 40 miles in a single day and then turn around and travel right back.  Like all playful creatures, they have their familiar play grounds.  As it happened in Zanzibar we loaded onto a small boat and sped off the coast to one such playground. 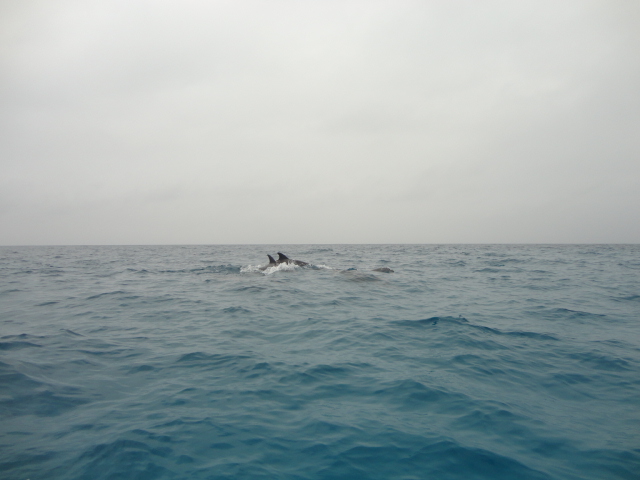 There, over the bow of the boat, we saw them leaping in the water and submerging, to leap again like synchronized dancers!  They swam towards the boats and away from the boats.  They swam up close to those who jumped in to touch or just watch.  Since my friend does not swim, I was the only one in our boat to jump out.  Alas my snorkeling skills are inadequate to get a look for longer than I can hold my breath and my swimming skills have tired from lack of use and old age. But still.

When the dolphins are not jumping for air, and to play with each other (or us?), they swirl and dive in underwater. They are never still, and they are never alone.  They don’t shake hands, clap or rub noses; but they do dance and frolic. This was the second time that I felt an unexpected intensity of faith performance as embodied MOTION.  (As a pilgrim circumambulating the Kaabah at the Holy city of Makkah with millions of others, I was overcome with the idea of the dervish for whom dance is the epitome of faith expression).  The waters off the beaches of Zanzibar are so clear.  Even as the dolphins dived 30 or 40 feet and I looked at them through my goggles, I felt the generosity of invitation to join in the dance—if I could.

Somewhere between the human slave cells and the dancing dolphins I thought about faith and freedom. To be free in your element and with those whom you choose, you celebrate life and love.  Just as I could no longer think of swimming with Dolphins in holding cells, I could never think of the slavery of human beings as something solely of concern to me or my people.  Like my friend with spontaneous tears, it is clear to anyone who understands the sanctity of life.