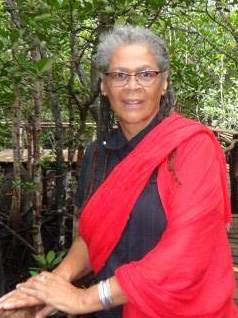 When I was a little girl, I used to be afraid. I was afraid of the dark. I was afraid of thunderstorms. I remember once cowering on the floor in the back seat of the car waiting for my dad to come take us home. My dad, who was a Methodist Minister, was too busy talking about God to really notice my reaction to being there in the back seat of the car during that terrible storm. Instead, he just kept busy, talking about God to other grown ups—talking in a way I did not understand, or found incredibly boring and long winded, sometimes even just a little frightening.

But Thunderstorms filled in a gap I did not know I had. A gap between my tiny self and the awesome Reality I have since come to know in a very different way. So when I would hear thunder, I thought of it as coming from God. I would begin this conversation with the Awesomeness of It asking moral questions: you know about good and bad. The thunder would seem to provide direct answers. Was that the voice of God?

Isn’t that how so many people think of God: an awesome and overwhelming omnipotent presence—with a voice that roars?

One dark night, during another storm, maybe my father heard me crying. He sat me on his lap and told me, in his quiet voice, how God had promised He would never again destroy the world by water. The sign of this promise, he said to me, was the Rainbow… the place where water, light and power combine to show color and beauty. That was my first experience of transcendence. From that time forward I would seek that loving nurturing experience of the Ultimate.

Fast forward from those days by over half a century and what I will share with you here in the few minutes allotted to me, is the self-same girl now speaking in a woman’s voice, through a woman’s mind, body and spirit. (for) I am the same; and yet—not the same. Today, I am Muslim. I chose Islam, after practicing the religion of my father contemplating the roaring voice of God, believing in the nurturing lap of serenity, then practicing Buddhism, learning to embrace silence and God. Today, the matter of “voice” figures centrally in the work I do and the women and men I work with and for.

Now I listen for that
still
small
voice
of God
IN MY HEART.

Learning to hear that voice did not really take a cataclysmic event but came through slow and steady change which was yet radical and complete.

As a child, I preferred to curl up with a book than play with the other children. I was not so much interested in the story-lines: saved damsels and brave handsome knights, but in words…words that spilled out from the pages and brought me into a realm both different from and yet intimately aligned with my own world.

Although I date my embrace by Islam from a cold day in November, 1972—the US Thanksgiving holiday in fact—when I made the declaration of faith called Shahahdah, in a small mosque in Washington, DC., the place of my deep turning, the turning of my heart came later, when I was given my first copy of the Islamic sacred text, the Qur’an.

Reading it whisked me off to that same old place of word-fascination and meaning-making, constructing the world in a line or a phrase. I have dedicated over four decades, my entire professional career—to mastering all that stood between me and understanding the Qur’an, starting with the Arabic language of its revelation and on to the related sciences and disciplines, pre-requisites to locating the text in both its historical place of revelation and its transcendent telling of divine truth.

When I began my Ph.D. studies I would discover something important about women and meaning making with regard to the Qur’an. Despite centuries of near complete consensus amongst Muslims about the significance of this book, and despite centuries of countless words written about the text, we had no record of women’s voices regarding textual meaning. That’s right, no female exegetes (or mufassirah), and no traces even of an informal personal conversation between female saints and mystics and this text.

Now, let me say this, lest you think otherwise, there is no restriction against women learning or constructing meaning. On the contrary, in fact, the Prophet, upon whom be peace, has said, “seeking knowledge is (like) a religious duty, incumbent upon every Muslim male and Muslim female”. That’s right, he was specific, “Muslim wa Muslimah”: male and female. He also said, “seek knowledge even as far as China”, which in those days was like the furthest distance of the known world.

So although many women memorized the text and memorized Prophetic sayings or ahadith, and while today many women still memorize it, if for no other reason than to fulfill the required prayers formulas, we just don’t have a record of women’s responses to what the text means until recently. Meanwhile, we have thousands and thousands of pages written by men.

It seemed to me, when I first learned this, that maybe, just maybe there might be some things about the text that we have not yet understood, because after all, the text speaks in a woman’s voice. For example, Mary, the mother of Jesus, speaks eloquently when she is in labor. She says (in Arabic) “Oh woe is me, would that I had died before this, and not only been forgotten, but (be so long gone that it does) not (even make) a memory.”

Who would understand that cry better than one who has also delivered up a new life from under her heart into the waiting world, a woman?

So what we have been doing and what I will talk about later this evening is the ways that women KNOW Islam and create Islam as we live it. Nothing more is needed, no expertise, no characterization of good or bad, just BE-ing Muslim and BE-ing engaged in living Islam. That makes us authorities constructing Islam AS we live it.

In particular, think about this: most of what the popular media tells us about Islam comes from men. Not just what men think and assert themselves as authority over, but what men do: the good and the bad. Including what they do to women and what they think about women. We are changing that script and to do so, we not only challenge authority, we create our own authority as an affirmation of our experiences. We also assert our interpretation of texts and canon. We create new meaning. We challenge any policy or any practice that does not allow us the space and freedom to define Islam according to our lived realities and then we keep on living. We call this a movement towards MUSAWAH, which means equality and reciprocity.

And you know something else: we are all different. That difference I will talk about in detail this evening. The purpose of this short talk was simply to remind you and me, that no longer will history record the silence of Muslim women about the meaning of Islam because from a still small voice, we have spoken.

Like Loading...
‹ Mid-Life Genesis by Natalie Weaver
Hobby Lobby, Not Invited at the Spiritual Negotiating Table by Qumyka Rasheeda Howell ›