We women of this blog, of this movement to bring Feminism to Religion and vice versa, are planting seeds of a better future. One part of this future is educating young people. I do not want my daughter to repeat some of the mistakes I have done in my youth. One thing I would most certainly urge her to do would be:

One of the Foremothers of the Goddess movement said that it is very easy to observe Goddess in everyday life: just look at teenage girls. They are uninhibited, creative, playfully sexual (I do not promote underage sex here, I am just emphasising that people can be sexual in their life cycle before and after they practice sexual acts with other people). Most of all, teenage girls are bursting with energy.

The question is: where would this energy go? What would it be spent on?

We find ourselves in a situation when we have to work out new rules of the game as we are learning them ourselves. We now have to teach our daughters and/or younger women what was never taught to us.

When I was young, I knew I had all the time in the world and all the strength in the world to do anything. Due to karma, or social conditions, or both, I actually succeeded in most things I took up. As a result my certainty of my goddess-like powers was never challenged.

I wasted a lot of energy this way. I wasted time on people and situations that could not be helped or mended. In addition, I created attachments, which continued to steal my energy for decades to come. Instead of working on myself or on good causes, my life has been spent on lost causes.

The problem with having or imagining to have limitless stores of energy is that you take on projects without analysing first whether they are worthwhile or whether they have a chance at being successful.

Now I see the energy of my young years as a gift. It gave me the opportunity to break through various walls, to cut various paths to choose from. At the moment, I am following some of those paths. However, some walls were not worth breaking. Some paths led to dead ends. I understand that it is all part of the journey. However, sometimes the losses are too much and some people never recover from the wrong turns they took in life.

This is why I believe that there is a need for a new Health and Safety Guidance for young women out there. I will be talking from a point of view of a woman who had male sexual partners. I would be interested in finding out how experiences of women who love women are different.

Very often, with me and many of my female friends the main lost cause was romantic love directed at an unworthy object. Such projects are neither worthwhile nor can they ever succeed. As all-powerful goddesses we used to think that we could have anyone we wanted. We did not pay attention to compatibility between us and our “chosen one,” be it spiritual, social or cultural. We did not mind if that person was as committed as we. We chose to ignore, very often, that while we considered ourselves great, interesting and equal to men in our lives, the men were still in the grips of patriarchy and did not want to see us as equal partners in the relationship.

We need to see it clear that like in the film Matrix people, until people are disconnected from the system, they are part of that system. It is difficult to realise, while sharing intimate time with a lover, that you’re in fact in bed with an enemy, that is, patriarchy. One person does not just represent themselves. They represent and act as a system that formed them. And we have been formed by patriarchy.

It takes great energy to work out patriarchal traits within yourself and work through them. It could take all your life energy and more to try to challenge patriarchy in someone else.

In this blog, many authors spoke about billion of ways in which patriarchy presents itself daily. From big ways: capitalist economy, imperialist politics – to small ways: household duties, sexual practices, the menstruation issue – patriarchy exerts its power. We all know how demanding it is to fight patriarchy, when it is so multi-faceted and present at every level of our lives.

In this situation, it is crucial to know where and on what to spend precious energy. Unfortunately, many religious norms can urge women to overspend their energy. We need to remember that under patriarchy women almost always do double load of work.

Even if a man and a woman do work outside home, women do most of the household chores. A woman is expected to be responsible for emotional land spiritual well-being of her male partner and children, and at the same time her spiritual leaders urge her to take responsibility for the well-being of people in her community or in a troubled area across the world. A woman practices patience every day by dealing with insensitive chauvinist colleagues, and yet her meditation teacher demands even more patience. 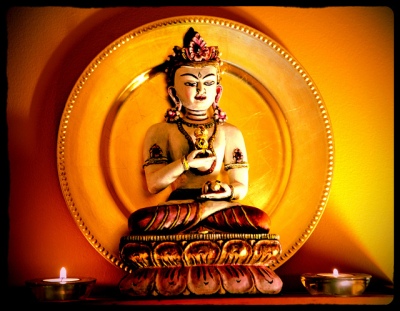 Burnout is all but inevitable. We need to be wise and seek out those practices in our religion that allow us to build up energy, to conserve energy, to watch our energy levels. In addition, we need to find ways on our spiritual path not to feel guilty about steering clear of projects that we know would drain our energy uselessly.

While our male partners and our male spiritual leaders slowly get accustomed to emergence of Feminist consciousness and practices, it is our role to be aware of our own energy levels and of the ways we can spend it that is most beneficial for us, our loved ones, society and the world.

Oxana Poberejnaia was an Officer of the University of Manchester Buddhist Society while studying for a PhD in Government, and has been involved in organising the Manchester Buddhist Convention, now in its 10th year. Oxana is now exploring the Sacred Feminine through marking seasonal festivals, working with her menstrual cycle, frame drumming and shamanic journeying, while keeping the practice of Buddhist meditation. Oxana is an artist and an author. She teaches frame drumming and meditation. Her works can be found on her blog.

Like Loading...
‹ The Yazidi Genocide in Iraq by Michele Buscher
My Take On “Feminist Theology: Four Perspectives” by Grace Yia-Hei Kao ›