Recently, some Christian communities have been angrily sharing these photos of lesbian and gay Jesus figures from Brazil’s pride parade in Sao Paolo. Conservative Christians tend to denounce anything to do with Pride as part of their general rejection of any celebration of LGBTQ folks as equally in the divine image. However, some progressive Christians and queer Christians have also expressed that they are offended by these images, which they characterize as “extreme,” because they believe the people in the Pride parade intended to offend Christians by insulting Christianity.

I love them. To me, these images express powerful theology: Jesus as gay, lesbian, a lover, fully human, present in homoeroticism… I find these images beautiful and powerful. I’m also not sure these queer Jesus folks are merely trying to cause offense. Maybe they are trying to cause shock; however, I see these acts as a positive statement rather than a negative one. I see these depictions of queer Jesus as a powerful statement about how Jesus is crucified whenever any oppressed group or person is denigrated, excluded, subjugated, or harmed by the more powerful community. People have previously compared Jesus to victims of homophobic hate crime such as Matthew Shepard and noted that such violence is widespread and comparatively socially acceptable.

I think many progressive, and even moderate Christians resonate with that parallel nowadays – homophobia has become increasingly taboo, support for same sex marriage has steadily risen, and the idea of a persecuted young gay murder victim seeming “Christ-like” probably has fairly strong purchase nowadays. In addition, just as in the Christmas song “Some Children See Him,” progressive Christians increasingly accept portrayals of a black Jesus, female Jesus, or Asian Jesus, as symbols of a Christ who transcends any human category and comes to each believer looking like h/er. Artistic depictions of a gay Jesus have also gained some publicity, some of which include erotic imagery. 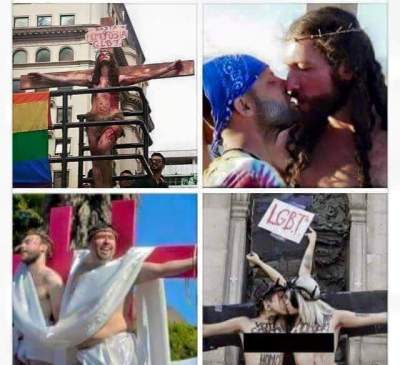 It also behooves us to examine what about pictures or portrayals of a homoerotic Jesus makes us assume offense was intended, or consider them “extreme”? What is offensive about sexuality, such that we should characterize a sexual Jesus as offensive? Is sexuality or eroticism shameful or offensive in some way? What is offensive about homoeroticism, that it cannot be considered utterly sacred, holy, and divine? I am seeing these Pride floats as living artwork, and to me, a piece of artwork that depicted Jesus as homoerotic would truly inspire and move me. I’m not saying there’s no way they were intended to be extreme or to offend or insult Christianity – but why would we leap to that conclusion, or why would we not instead embrace these images and define them in this alternative beautiful way?

Honestly, if some of these Pride floats WERE trying to be offensive, I can’t help but be kind of glad about that, too, weird as that sounds. The Christianity they denounce is that part of the church that offends me, too. They denounce the diseased, frightened, oppressive parts of the church that have wounded and killed them – that is their target. Sure, we share symbols with that part of the church. But I’d feel the same way about a Pakistani family who lost their children to an American drone, who then desecrates the American Flag: good for them, for standing up to an oppressive, violent force in their lives. It’s a symbol, and while I use that symbol to represent myself sometimes, their statement does not actually target me or my engagement with that symbol. It targets something I, myself, also reject and denounce.

Moreover, as Christians, our response to these floats should always take into account the incredibly deep wounds the Church has inflicted on the LGBTQ community. If we are asking, “Do these photos offend me?” we are asking the wrong question. The right questions are, “What do these depictions represent to the LGBTQ community? What can the Church learn from these people about who we have been, who we want to be, and how we can become more faithful? How can we enter into conversation with them so that we can learn and grow together? How can we be a force of healing for this community? How can we better celebrate, embrace, and honor homoeroticism and LGBTQ persons as divine, holy, sacred, and beautiful gifts?”

The Church has truly, spectacularly failed on the issue of human sexuality – it has treated sexuality as a shameful, fearful, oppressive taboo to be repressed and denounced. The Church’s diseased, sinful treatment of sexuality has contributed to incredible sexism, heterosexism, and violence. Tallessyn Grenfell-Lee has noted that if it is to remain relevant to humanity, the Church MUST produce a powerful, compelling, liberative, salvific, healing, intelligent approach to human sexuality. I believe Christianity must celebrate homoeroticism as a natural part of life, and embrace healthy human sexuality as divine and beautiful.

Trelawney Grenfell-Muir is an adjunct professor in the Department of Conflict Resolution, Human Security, and Global Governance with a specialization in Cross-Cultural Conflict at the University of Massachusetts, Boston. She holds an M.Div. from the Boston University School of Theology with a concentration in Religion and Conflict, and a Ph.D. in Conflict Studies and Religion with the University Professors Program at Boston University. She was a fellow at the Institute of Culture, Religion, and World Affairs and at the Earhart Foundation. Grenfell-Muir has conducted field research in situations of ongoing conflict in Syria, Lebanon, and Northern Ireland. Her dissertation explores the methodology, constraints, and effectiveness of clergy peacebuilders in Northern Ireland. She has been an invited speaker in community settings and at MIT, Boston University, Tufts, and Boston College on topics of gender violence, economic injustice, and religious or ethnic conflicts and has also moderated panels on genetic engineering, cloning, and other bioethics issues.