Safe Hands in the Moria Refugee Camp in Lesbos: A Starfish Project 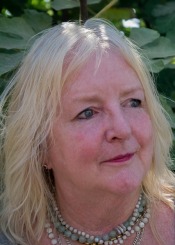 Imagine that you are a young mother of three from Syria, and that after fleeing your home with your husband and family, you arrived in Lesbos and have been waiting for months to have your asylum papers processed. You don’t know when that will happen, it could take more than a year, you have been told. You are staying in a tent with other families because the containers are full. You have no privacy. When it is cold you are cold, and when it rains you get wet. You try to keep your family clean and healthy, but there are not enough toilets and showers for everyone. In addition, you are afraid to leave the tent at night because some of the men without families drink too much and harass you and the other women.

You have heard that a strange new disease is killing people all over the world. It has a name but you cannot remember it. You don’t know what the symptoms are, and you don’t know what to do to protect yourself and your family. What you do know is that the camp is on lockdown, which means that no one can leave. This is especially hard on the men, including your husband. They have been used to feeling at least a little bit free when they walked outside the camp. Now they feel like they are in prison. They get angry easily, and this makes life harder for you and the other women.

The refugee camp in Moria, Lesbos, Greece was declared an international human rights disaster even before the Covid-19 crisis. Over 19,000 people are housed in a camp built for no more than 3000. Sanitation facilities are inadequate—300 toilets and 250 showers—and they are almost always filthy. There is very little organized rubbish collection which means that people simply discard used diapers and other garbage wherever they can. Observers have commented that the conditions in the camp are worse than those they have seen in Asia and Africa. Already suffering from an economic crisis that began in 2009, the Greek government has lacked the resources and the will to deal with the refugee crisis. The new government plans to make it more difficult to get asylum and to deport those who are refused. Other European countries turn a blind eye.

In response to the Covid-19 crisis, Greece responded swiftly with a stay-at-home policy. For the refugee camps, this means lockdown. Though the international press has warned that the disease would spread rapidly in the camps, the government has done little beyond the lockdown to ensure that this does not happen. People in the camps have not been informed about the nature of the disease and the measures required to stem its spread. Although everyone else in the world is washing hands and using hand sanitzers, there are no sanitizers in the camps and not enough clean water for washing hands.

Starfish Foundation, a local NGO founded by residents of the island of Lesbos, has responded to the Covid-19 virus with an emergency handwashing program called #SafeHands at the Moria refugee camp. SafeHands installed five handwashing stations at the entrance to the camp to protect the inhabitants from infection by visitors and for their own use. Each washing station consists of a refillable 30 liter drum with a tap, a bucket below to catch the water, and a stand for the water drum. Approximately 2500 people use the handwashing stations from 8 am to 5 pm when volunteers are present to inform the refugees about the virus and the need for washing hands to prevent its spread. They remain in use at all hours.

Starfish Foundation is working with Stand By Me Lesvos, the refugee activist group Moria Corona Awareness Team (MCAT), and other community representatives, with the hope that the refugees will take responsibility for cleaning and maintaining the stations themselves. Currently more than 50 young refugee men are helping with SafeHands. They receive a good meal provided by Starfish every day, but more importantly they are being given a chance to do something constructive with their time, to help others, and to learn social and work skills.

Donations to Starfish are desperately needed. They will be used to cover the costs of refilling the water drums and replenishing soap and towels, and, when sufficient, to add additional stations so that all of the inhabitants of the Moria camp can wash their hands at least once a day. (Scroll down to the bottom of the paypal option for English.)

If you are feeling sorry for yourself today because your movements are restricted, I can guarantee that you will feel better if you reach out to help someone who has it worse than you. That was my mother’s advice, and it is good counsel. As soon as I finish this post, I am going to make a contribution to Starfish. Can you help too?

Carol P. Christ is an internationally known feminist and ecofeminist writer, activist, and educator who will soon be moving to Heraklion, Crete. Carol’s recent books are  Goddess and God in the World: Conversations in Embodied Theology and A Serpentine Path: Mysteries of the Goddess. Carol has been leading Goddess Pilgrimage to Crete for over twenty years: join her in Crete. Carol’s photo by Michael Honneger.