I am a priestess of the divine feminine, ordained in the Fellowship of Isis.  So how did I end up becoming ordained for a second time in the Christian Gnostic tradition?  It seemed to me, that there were several paradoxes inherent in the situation.  My questions and conflictions made me an utter pain to both my mentor and fellow classmates.  Ironically, in the end I was the only one who stayed the course.

I rejected Christianity at thirteen and never looked back.  It took me a long time to say, “I am not a Christian,” aloud.  The first time I made that declaration, I thought I was having a panic attack because my heart was beating so fast.  The next time I felt that kind of fear I was alone in our apartment in Dubai, writing the liturgy for my Gnostic mass – the final requirement for becoming a priest.  Sitting safe and sound, of no interest to anyone, in a country that wasn’t even Christian, I was suddenly swept with the temerity of what I dared to do.  Women have been burned for much smaller crimes and all those ancient memories flared up at once.  The memes that infect us as children stay with us, vocal and insistent at the least opportunity and it may take a long time to manufacture the antibodies our souls need to regain health.

I was guided to that Gnostic apprenticeship.  The signs and voice that led me were crystal clear.  The studies I undertook included a detailed study of the 1st century C.E.  The lens for the study was Mary Magdalene, The Gospel of Mary and other Gnostic tests from Nag Hamadi, but it also included the socio-economic history of those times.

These studies, along with my own draw to (empty) churches and cathedrals, the hymns I know by heart and the deep affinity I feel for Christian symbols and stories, led me finally to the understanding that I am a cultural Christian.  Christianity, though not the portal into spirituality I choose, is my root, an honestly come-by heritage.  Its symbols are embedded in my collective consciousness, part and parcel of my being.  I could no more eradicate them then I could alter my gender identification, or the rooted ways nationality informs my personality.  My preferences don’t count at such depths.  In rejecting this heritage, I rejected myself and my ancestors.  I had to find way to embrace and claim them.  That embrace is the reason I was called to this path by the force (Spirit, God, Goddess, Higher Self) within and without that wants me/us to be whole. 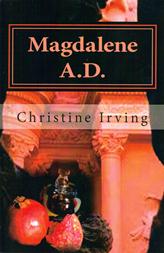 I wasn’t being called to become a Gnostic priest.  I was called, as we all are, to know myself.  The furtherance of that knowing restored a part of me that was lost.  Not just my Christian heritage, but my elder, Hebraic heritage which informs Christianity in all its aspects.  My studies engaged me in the world more fully and deepened my own spiritual path and validated the importance I attach to my connection with the Divine Feminine, that far older, more longstanding, birthright.

Christine Irving is ordained as a Priestess of Isis in both the Fellowship of Isis and the Gnostic Church of Saint Mary Magdalene.  In her aspect as a Gnostic priest she compiled the Mass of the Hieros Gamos (Sacred Marriage) based on Biblical and Gnostic texts and taking its basic form from the structure of a Catholic mass.  She offers this mass on request.  Her Gnostic studies included in-depth research into the life and times of Mary Magdalene.  Christine’s subsequent interest in her led to writing Mary Magdalene A.D. a fictional inter-weaving of all available information about her life and times. Find her at her website: http://www.christineirving.com/