Home › Academy › Undermining Our Own Authority by Grace Yia-Hei Kao

Undermining Our Own Authority by Grace Yia-Hei Kao

“I’ll be the first to admit that it can be difficult, if not exhausting, for women professionals to discern how to be strong and assertive (and thus be taken seriously) without coming across as arrogant or b*tchy. But there is indeed room for play between over-deference and cockiness, and the ability to code-switch while in formal settings would be a good step in the right direction for many of us.”

Whatever your take is on Madonna’s feminist bona fides, she was definitely on to something in her 2001 hit “What it Feels Like For a Girl.”  Madonna sang about the tremendous pressures females of all ages face to conform to gendered norms of physical appearance and demeanor. I want to use her lyrics to discuss some ways I have seen young women in academe subtly undermine their own authority.

To cut to the chase: female students and junior scholars have a greater tendency than their male counterparts to engage in self-sabotaging patterns of speech, writing, and body language. I say these things both as someone who has worked with undergraduate and graduate students for the past 8 years and as someone who has had (and still has) to train herself out of certain “bad habits.”

Many of us have been conditioned under mainstream conventions of femininity to self-efface, remain deferential toward men, and project an aura of a soft and inviting presence. The problem in academic settings is that these “ladylike” behaviors lead others to see us as insecure, under-confident, and unqualified.

“When you open up your mouth to speak / Could you be a little weak?” (Madonna)

Let’s start with public speaking. While there are several pitfalls to avoid, the one I’ll focus on here is very common: the tendency among women (and also, anecdotally, among “out” gay men who have affected speech) to end their declarative sentences with an upward lilt or inflection, effectively transforming their statements into questions.

What I mean is the following. Instead of hearing this:

“Today, I’m gong to talk about Kierkegaard. I’m going to argue that standard interpretations of his Fear and Trembling are mistaken.”

I effectively hear this:

“Today, I’m going to talk about Kierkegaard?  I’m going to argue that standard interpretations of his Fear and Trembling are mistaken?”

To state the obvious, the speaker in the second set of sentences projects uncertainty, tentativeness, and a desire to please others. Those might be good things if the speaker is an already established senior scholar or is otherwise speaking in a context where s/he is clearly the one with more power or status (e.g., a veteran teacher to students), since the upwards lilt “works against type” in suggesting openness and an accommodating posture.

But the upwards inflection generally won’t help those students or scholars who are trying to establish themselves as credible, competent, and authoritative. Embodiment, in short, counts. Speakers who appear younger or smaller in size than those in the audience or those who present themselves as über-feminine in appearance or demeanor should be extra careful about their inflection, lest they feed into existing stereotypes of their submissiveness or lack of seriousness. 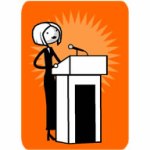 Don’t get me wrong–I’m neither saying that women should be trained to “speak like men,” nor that there is no space for hesitation or vulnerability in academe. I’ll be the first to admit that it can be difficult, if not exhausting, for women professionals to discern how to be strong and assertive (and thus be taken seriously) without coming across as arrogant or b*tchy. But there is indeed room for play between over-deference and cockiness, and the ability to code-switch while in formal settings would be a good step in the right direction for many of us.

(As an aside that I won’t flesh out here, I mapped out in my head the above points last Sunday in church while watching an ASL interpreter. That led me to wonder if there were comparable gendered patterns of communicating through sign language among the deaf community as well).

“When you’re trying hard to be your best / Could you be a little less?” (Madonna)

Let’s now move onto writing style. Students who submit philosophical or argumentative essays for my classes know that they will be evaluated not so much on the conclusion they reach, but on their justification for it (e.g., the adequacy of their textual support or analysis). What I often see among my students—especially, but not exclusively among young women—is that they weaken their claims with unnecessary qualifiers at the beginning of their sentences (viz., “In my opinion….”, “I believe….”, “As I see it….”, “From what I could gather….”)

Notice the difference between these two sentences:

Sentence 1: “Neighbor-love is the most important norm for Christians because of X, Y, and Z.”

Sentence 2: “I think that neighbor-love is the most important norm for Christians because of X, Y, and Z.”

Not only is the “I think” of the second sentence obvious, but the use of a softening or hedging qualifier suggests insecurity on the part of the author to allow the argumentation to stand on its own. It’s as if the writer wants the reader to minimize her findings (i.e., no one in the world but her would have come to that conclusion and, more importantly, the conclusion is unsubstantiated).

Now, I don’t mean to imply that there is never an appropriate time to qualify one’s points. Two exceptions come immediately to mind:

(1) Qualifiers that appropriately signal cases where the writer has not provided sufficient evidence to justify a particular claim but wants to make it anyway (e.g., “While the nature vs. nurture question may never be conclusively resolved, I think that….”

(2) Qualifiers that are intended to connect the writer’s unique social location to the claim being made (e.g., “As a Californian, second generation Taiwanese American, and progressive Christian, I am appalled that….”)

But bracketing these (and possibly other) exceptions, writers should avoid using these self-undermining qualifiers when composing argumentative essays because their addition weakens the overall tone of their work.

Since I am running out of space to address the issue of body language properly, I will close by quoting Dr. Karen Kelsky of the “Professor Is In” blogsite.  The following passage is taken from her helpful post entitled “The Six Ways You’re Acting Like a Grad Student (And how that’s killing you on the job market)”:

“And lastly, the handshake. Oh my god, the handshake. If you do nothing else from this post, please, I beg you, do this. Get up from your computer, go find a human, and shake their hand. Shake it firmly. Really squeeze!  Outstretch your arm, grip their hand with all your fingers and thumb, look them firmly in the eye, smile in a friendly, open way, and give that hand a nice, firm shake. Repeat. Do this until it’s second nature. If it doesn’t feel right or you aren’t sure if you’re doing it right, find an alpha male in your department, and ask him to teach you. Seriously, grad students, butch it up.”

Good advice for all of us.

Grace Yia-Hei Kao is Associate Professor of Ethics at Claremont School of Theology. She is the author of Grounding Human Rights in a Pluralist World (Georgetown University Press, 2011) and is working on a second book manuscript on Asian American Christian Ethics. Read more about her work on her website.