Brushing yellow gold on top of deep crimson, I sense the paints coming alive, even as I feel myself moving outside of ego, outside of time, and inside to my deepest source.

At least forty thousand years ago the human family began to make art; drawing, painting, sculpting and playing music. For much of human history, art has served a dual purpose. Some art has been purely decorative, while much art has expressed a spiritual understanding of our physical existence.

During the Paleolithic period, c.15–18,000 B.C. on the walls of a sacred cave, Lascaux, in southern France, our ancestors created beautiful paintings, often interpreted as a ritual that invoked sympathetic hunting magic. They are a reminder of the bond between the spirit world and the human world. This was a magical time in which humans lived immersed in the connection between the physical and spiritual worlds. Art was a means to both express and facilitate that connection.

The seasons turned and the art and mythical imagery of the Paleolithic era was transmitted to the Neolithic era in Old Europe. Worship of the Goddess, as giver of all life, continued as did the art which honored Her and our connection to Her. The artists from these ancient days expressed their communal worship through the creation of cult idols and objects, shrines, painted pottery, and religious ceremonialism. The artists, though anonymous, were the hands and eyes of the creator, deepening and transforming the consciousness of their community.

As the human community in the western world developed and grew, art remained firmly grounded in the spiritual. From the megalithic stones of the Celtic era, to the illuminated manuscripts, mosaics and fresco paintings in the churches of the Middle Ages, right up to the work of painters like Van Gogh, Kandinsky, Malevich and Mondrian in the more modern era of late 19th and early 20th century – art expressed our human connection to the divine.

But something changed in the 20th century. Dissatisfaction with some of the repressive qualities of religion, combined with an ever increasing materialism helped fuel the “art for art’s sake” movement. Art became a mere commodity. Belief in the spiritual has been completely uprooted and destroyed in most contemporary art. Visit most contemporary art shows and you’ll see a concern with concept, with relationship of materials, with social issues, but not much expression of the spiritual.

My Heart Opens, oil on canvas by Judith Shaw

I stand outside of the mainstream of contemporary art, as my art has always been firmly rooted in the spiritual. Painting is my spiritual practice. Brushing yellow gold on top of deep crimson, I sense the paints coming alive, even as I feel myself moving outside of ego, outside of time, and inside to my deepest source. Creativity brings each of us into communication with our own soul, opening a dialogue with our higher self.

The Tree of Life, oil on canvas by Judith Shaw

Most of my painting decisions are a result of a feeling. This approach arises from a feminine world-view which acts from feeling and intuition. When painting, instead of asking myself, “What should I do?”, I find my question is more often “How does this painting want to be?” And usually the painting is a reflection of how I want to be. My art has been deeply inspired by the wisdom of the Goddess. She has guided me to paint my own modern interpretation of Her and Her ancient wisdom. She has lead me into painting olive groves, lotus blossoms and the mystical philosophy of sacred geometry. 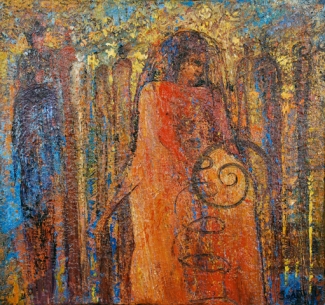 Sometimes I wonder how the paintings I paint finally emerge into the world. It’s a back and a forth, a finding and a losing; ultimately there’s an image that remains. A random splatter of paint reveals an eye. Scratching into the paint with a palette knife defines a hip. A scumble of light color plays over the splatters and scratches, creating a texture of depth and light. Later I ask myself “Where did that come from?” At times I feel I’m a channel through which these images flow. I always have to remind myself to sign my paintings, as they don’t seem to actually be “mine”. 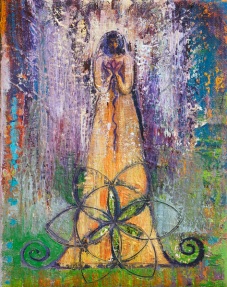 Our Lady of Heaven and Earth, oil on canvas by Judith Shaw

Though the art world doesn’t welcome it, more and more people are responding to art which awakens the capacity for experiencing the spiritual. As an artist and a woman who believes that the physical is a beautiful manifestation of the spiritual, I believe it is time for us to reconsider the spiritual in art.

Judith Shaw, a graduate of the San Francisco Art Institute, has been interested in myth, culture and mystical studies all her life. From a college paper on Beauty and the Beast to a much later series of paintings on Beauty and the Beast…From a student painting of circles to her current fascination with the interlocking circles of sacred geometry…From reading When God Was A Woman in the early 70’s to her ongoing visual exploration of the role of the Goddess in our modern world…From her very first oil painting of a tree to her most current painting, The Mother Tree— her early influences of Jackson Pollack’s abandon, and Van Gogh’s emotionality are evident. Originally from New Orleans, she has traveled in Mexico, Central America, China, Europe and Greece and lived in Mexico and Greece. The passion and bright colors of many of these places have affected her palette and style. Judith makes art, dances with abandon and experiences the world through travel and study. Her work, which expresses her belief in the interconnectedness of all life, can be seen on her website at http://judithshawart.com

Like Loading...
‹ “AS WE BLESS THE SOURCE OF LIFE, SO WE ARE BLESSED” by Carol P. Christ
A RITUAL OF FAITH: SENDING LOVE TO THE CHILDREN OF VETERANS by Stephanie Mines ›