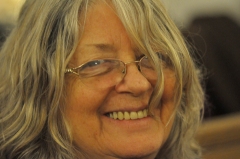 We are creatures of water.  Water is our original source as well as what makes up at least 70% of our bodies. It is part of every cell and fiber in us and is our essence.  What if water were the common denominator weaving all of life (earth, animal, human, and plant) together? Is it what connects us all?   It is pretty incredible when you realize that the water we have here on Earth right now is the same water that has always been here.   Do you suppose there are messages contained within water?  Do you think it is possible for our ancestors to speak to us through water?

When I think about water I am immediately taken down memory lane to the various “waters” I lived near or visited.  As a child I spend several summers on Hermosa Beach in Southern California where the intertidal zone reaches far out, gently sloping to deeper waters.  There is an abundant kelp forest off the shore there in the warmer Southern California waters.  For a child, kelp was the food for imagination, as we dressed ourselves in it, becoming sea monsters chasing each other about! In addition, I found pleasure in popping the pods, which sprayed seawater upon bursting.

I most remember the sand crabs tickling the bottoms of my feet as I walked out to deeper waters. The feeling was often so disturbing that I could not walk any further but had to swim!  What fun we had in scooping up great handfuls of wet sand as the waves receded and watching then squiggle and squirm to get away.  We never hurt them but allowed them to bury themselves in the sand when we released them.

As a teenager, I lived in Carmel where the intertidal zone is different.  There was very little shallow area as the ocean bottom dropped quickly. This caused very different and very dangerous currents for swimming.  There, we had far less kelp.  The kelp did not make it to shore because of the harsher impact tides against the coastline. The water was also much colder here.

As an adult, I lived for a while in Ventura, perhaps 100 miles north of my childhood home.  My favorite beach to visit was at a spot where the river came down from Ojai Valley and met the sea at Sanjon Beach.  The water, as it came onto the beach, was very slow moving, somewhat boggy and sadly, not very clean.  Many seabirds loved it and found good fishing in those waters.  Smooth river rocks covered the beach, which became sand over years of time.  I did not swim there but loved to sit on an old log and just feel the salt air and watch the birds.

As a young teenager I lived next to a lake in Massachusetts.  We were the only residents who lived there year round, the remaining houses serving as summer homes for families living in Boston.  Also, all around us were wet boggy areas filled with grasses and cattails.  In the winter, the lake and bogs froze over providing wonderful spots for ice-skating.  If you walked though the boggy areas, you could find open clearings where the grasses and reeds prevented the wind from disturbing the surface. The ice was as smooth as glass – pure black ice.  That is where I practiced my twirls and spins without fear of hitting bumps.  If you walked out far enough on the lake, you could also find patches of smooth ice.  You had to be careful of bumps and ridges coming out of nowhere.  Along the shoreline the ice was frozen in waves from the wind hitting it as it froze.  The lake and the creek running into it, provided homes for many grasses, water plants, fish, snakes, and turtles.   In the summer, I would often swim out to the center of the lake with my rowboat tied to my ankle by a rope.  There I could sit and sun, and read my book or fish for a while. At times I swam across the whole lake (about one mile)to visit a friend.

While living in Georgia, I lived in a log cabin out away from civilization on an acre and a half with a year round creek running beside the house and a pond in back.  The pond was man made and I don’t think it had been there long enough to develop much plant life.  It was however, a haven for insects and frogs! In the spring, the Spring Peepers put on a performance every evening, singing and chirping – peeping sound back and forth across the pond.  About a month later, the American Toads joined them, sending beautiful tones out across the land.  It was like a symphony between the Spring Peepers and American Toads! 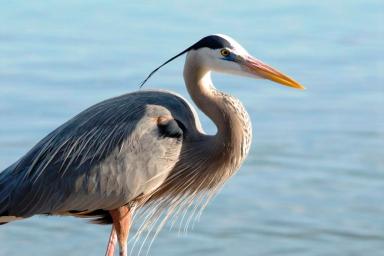 One incredible moment was when a great blue heron flew in over the pond, swooping down and settling on the shore.  He took my breath away!

Some mornings I would take my coffee down to the edge of the creek.  There I would sit in my swing and listen to the rushing water.  All along the banks grew talk grasses and in one place were beautiful yellow, water iris.  I never saw any fish in the creek but I could not get very close to it because of the steep bank.  The bottom was clear but there was moss on some of the rocks.

Here in Austin, right in the middle of downtown, we have Lady Bird Lake, a man-made lake created from the Colorado River.   It is what makes Austin the lovely city that it is.  Greenbelts and parks are everywhere.  The bridges that span across it are the nesting grounds for the largest bat colony in the world.  All along the shoreline trees come right down the edge.  Most are Texas natives.  The city stocks it with bass and sunfish.  When I visit, I find ducks and other water birds, the most spectacular of which are the cormorants that sit high in the tree tops, diving into the lake for their food.

Water plays a huge role in my spiritual life, in that it calls to me to be close.  I am at home in it and beside it.  I learned to body surf with my father before I could swim.  Later, at the age of fourteen, I began teaching others to swim. After attending the Red Cross Aquatic Academy, I trained water safety instructors for the Red Cross and lifeguards for the U.S. Army.

The ocean is my biggest love.  For me it is the most nurturing and welcoming.  It is not however, all peaceful but can also be terrifying!  When I lived close enough, it was Mother Pacifica who took my pain into her healing waters.

Lakes can substitute but to me they are just not the same.  A running river makes a better substitute.  It is clear to me why so many rivers and seas are named for goddesses as they are most holy and nourishing places, teeming with new life.  There are other water spots peppered throughout my life; these are but a few and those that standout the most for me.  I am more than 10 miles from any water sources that I know of and those are very hard to get to for me.  To my body, this feels like a loss, that something is missing in my life.

In Celtic spirituality, the spirit of the land is often embodied in water — in springs, rivers, lakes and later, the sacred or holy wells. The people associate the surface and underground waters of rivers and tributaries as well as all the lands drained by them, with goddesses. Local rivers are the mothers of the clans and the bestowers of health. In Her arms, She carries the overflowing cornucopia of the abundant, giving land.

The water right now is the same water from the beginning. It holds within its depths all the energy since the beginning. Imagine how strong this energy is!  The closer we can be to this energy, the stronger the connection.   Is it any wonder then, why we seek this water?  We yearn for the ocean as a child for her mother. When I stand next to a rapidly rushing river, I am thrilled.  The clean cool surface of a pond calms me.

Water is a spiritually nourishing mother, a healer and a source for inspiration.  The message is one of abundance and permanence.  It is no wonder some call Her, Goddess.

Deanne Quarrie is a Priestess of The Goddess, and author of four books.  She is an Adjunct Professor at Ocean Seminary College, teaching classes on the Ogham, Ritual Creation, Ethics for Neopagan Clergy, Exploring Sensory Awareness, energetic Boundaries, and many other classes on the use of magic.  She is the founder of Global Goddess, a worldwide organization open to all women who honor some form of the divine feminine, as well as The Apple Branch – A Dianic Tradition where she mentors women who wish to serve as priestesses.

Like Loading...
‹ Rhiannon, Goddess of Birds and Horses by Judith Shaw
Do Women’s Circles Actually Matter? By Molly ›