Of Birds, Angels, and Tidings of Great Joy by Carol P. Christ

A link to a video of a European Hooded Crow sliding down a snow-covered rooftop on a mayonnaise-lid sled appeared on my Facebook timeline a few days ago. For me this crow expresses the “spirit of the season” as aptly as anything I can think of.  She brings a smile to my face on a grey and cold morning.  She makes me want to climb up on the rooftop and slide down with her.  She reminds me that we humans are not alone–we share the world with a vast multitude of other intelligent creatures.  She tells me that there is nothing more sacred than the joy of life.

The ancient Cretans believed that the capacity to enjoy life was not limited to human beings–they believed that animals  enjoy life as much as we do, and they expressed this sensibility in their art.  They also celebrated birds because their  arrival in spring announces the beginning of the growing season. This early pot in the shape of a bird or duck opening its mouth to–as we kids used to say–“drink the rain” cannot help but evoke a smile.

The image of a happy bird that both drinks water and pours water from its bill or beak was so beloved by the Cretans that even after their pottery became far more sophisticated, they pointed the pouring spouts of their pitchers upwards and put bird eyes on them.

On a pitcher from Santorini, the eye and beak of the bird are combined with paintings of the exuberant flight of swallows.  The artist added a necklace and bejeweled nipples.  Here we see the multivalent symbolism of Old Europe: the pitcher is both bird and woman, the image of the Bird Goddess. She is holds the life-giving waters that nourish both birds and human beings in her rounded belly.

The Bird Goddess has come down to us as the Christmas angel.  As a child I loved angels because, along with fairies who were also winged, they were the only symbols of the sacred as female that I ever saw. 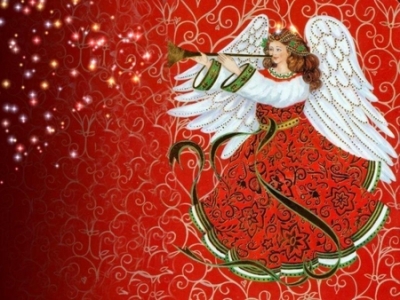 Now I know that angels are not the only, but rather the most recent in a long line of sacred female images.  What are angel wings but the wings of birds? What songs can be sweeter than the songs of birds?

“Behold I bring you glad tidings of great joy!”

Is there any greater glad tiding of joy than the singing of birds on their arrival in spring, as each day dawns, and just before the sun sets each night? And is not joy shared among all creatures great and small?

Don’t forget to watch the video of the joyful and intelligent crow.

Carol P. Christ was born on Winter’s Solstice. Her mother loved to tell her that songs about angels were being sung in the hospital while she was being born and that was why she was named “Carol.” Learn more about the Bird Goddess on the Goddess Pilgrimage to Crete.