Home › Activism › Pride: Honoring the Immigrants and the Helpers by Laury Silvers

Pride: Honoring the Immigrants and the Helpers by Laury Silvers 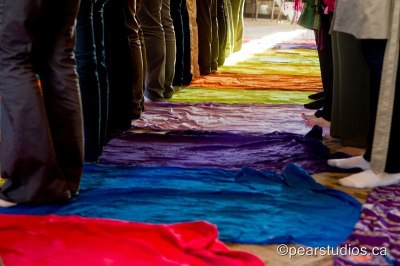 It is World Pride in Toronto this year. The city is filled with people from everywhere celebrating the gorgeous spectrum of humanity and the right of all human beings to live with dignity.  In honor of World Pride and happy coincidence of the beginning of Ramadan, I would like to share one of the earliest sermons I gave at Toronto Unity Mosque reflecting on the struggles of our LGBTQ refugee congregants. I share this to honor those refugees, as well as our other congregants whose journey is no less significant, and also to honor my friends and co-founders of the Toronto Unity Mosque, El-Farouk Khaki and Troy Jackson, as well as Adnan Hussein who was with us from the early days.

When we first established the mosque, I saw it only as a shelter for the spiritually homeless. We’ve grown so much beyond this original vision to serve far more people than I ever imagined. I say “I” because El-Farouk and Troy imagined it. El-Farouk has been fighting for the rights of LGBTQ Muslims and for gender-equality in Islam for decades. Troy has been a longtime community activist himself. There is no space here to adequately detail the work El-Farouk and Troy have done for others. El-Farouk is also a refugee lawyer, mainly for LGBTQ refugees to Canada. For the first couple of years, the mosque community met at El-Farouk and Troy’s home and home office. As a result of the location, many of the original members of our mosque were refugees. Each week I got to know them a little better and hear about their struggles.

I say that we only get the saints at our mosque. We only get the people who come looking for God in spite of the horrors that those acting in God’s name have wrought against them.

So many of you here are refugees. You left your homes, your families, and your friends because you could not live where you were.  From what I know, your option was to live a divided life in which you had to perform a lie every waking moment simply to survive.  For many of you, that meant a marriage of unending non-consensual sex, a life of rape.  For others, it meant living in bodies that betray your knowledge of who you are.  In others, that meant of life of hiding and living on the edge hoping not to be found out and killed. For those of you who cannot hide who you are, it meant a life of humiliation, beatings, sometimes torture, and possibly murder. For others, some or all of that.

Your struggles remind me of the struggles of the hijra, when the Prophet and his companions who were forced to  escape the humiliation and violence they faced in Mecca.  Leaving for the city that would be come to be known as Medina, the City of the Prophet, was not easy and the trip was not quick. We know that so many of them had to leave with nothing and escape without notice. The lives they had built for themselves had to be abandoned. In some cases, they were pursued by their enemies well into the desert. These were people who, like you, had to live in hiding or could not hide who they were. They only wanted to live a life of wholeness, tawhid. Tawhid, declaring the oneness of God, is not an idea, but a mode of living in which one’s inward self and outward self are brought into harmony with one another.

The Qur’an describes these muhajirun, those who emigrated from Mecca, and the ansar, those who helped them when they arrived, as the “Foremost,”  those who are brought near to God.

The Foremost are those first ones who emigrated and those who helped them, those who yearned to be with the immigrants in their beautiful struggle for wholeness and peace, God is so pleased with all of them. And they are so pleased with God. [For their struggle] God has promised them all paradise, a garden underneath which rivers flow, to rest in forever, and that is a supreme realization of the journey (Q 9:100).

Not everyone who left made it. I don’t remember where I heard this story but it has always moved me. I was told that one young man who loved God and the Prophet so much that he set out across the desert even though he was alone and had no camel. At some point, the heat, hunger, and thirst so overcame him that he ended his life by cutting his wrists. The Prophet had already arrived. As he sat looking out into the desert, he saw this young man walking toward him dressed in white and gleaming with light. He stood before the Prophet with love in his eyes but his hands behind his back. The Prophet asked him why he was hiding his hands. The young man replied that God had forgiven him, but his wrists still bore the scars of where he cut them. The Prophet began to weep for the suffering he endured only out of his love of God. His courage was no match for the realities of the desert crossing. He was brought near to God as his recompense.

To me, you all who made it, all those who struggle but do not make it, and those who struggle but cannot even make the first steps are among the Foremost with God. I want to make clear that even those who are only muhajirun in their hearts are included. God knows what each of you can do and asks for nothing more. I believe you are among the Foremost not just out of the recognition of your struggle… Let me see if this makes sense: I think about the Foremost as those whom God has urged to break free to find a way to wholeness. Perhaps we can say that God put dissatisfaction with living falsely in your hearts. God put you first, and so you took up the burden.

That burden is the Trust. God offered the Trust to the heavens, and the earth, and the mountains, but they refused it fearfully [knowing what it meant]. But the human being bore it (Q 33:72). The burden of the Trust is to live a life of tawhid, to cultivate a life of wholeness inwardly and outwardly, but also to help others do the same, even though that means sometimes sacrificing a great deal for it.

But not all human beings honor the Trust.  The verse ends with, And the human being has been oppressive and ignorant. This particular verse is in the chapter named “The Confederates.” The Confederates were those who conspired against Muhammad, both in Mecca and in Medina. They banded together against his struggle to bring people to a life of wholeness. In the opening of the chapter named for them, we are told that living a divided life is against the very nature of the human being. God did not make people to have two hearts within them (Q 33:4).

But some people are not only satisfied to live with two hearts but seek to oppress others who will not do the same. The verse describes how these people lie and abuse others, treat women like garbage, and steal the birthright of orphans. They try to create a world of ignorance in which people are forced to live divided lives of suffering. You know who these people are too well.

The verse ends with both a threat and a challenge: God tells you the truth and guides on the path. We shouldn’t miss the scolding or mocking tone here. When this tone is used, it typically acts to remind people that no one will get away with injustice.  As a reminder, it is also a challenge to those who inflict it to change now before it is too late. The verse clearly states that human beings were not made for this duplicity and oppression, the truth is clear, and the path of guidance is open.

You are the muhajirun who did not turn away from the Trust. You took on the burden of seeking wholeness. You were called and refused to live with divided hearts and have been brought near to God, no matter how far you or others were able to come in the struggle. The verse calls your struggle, “ihsan,” translated sometimes as “doing what is beautiful.” Meaning, living in accordance with tawhid, in wholeness inwardly and outwardly and so at peace in yourself and with others.

And what about us? If we are to be your “ansar,” your helpers, and be rewarded alongside you, then God willing we can live up to the weight of that burden, taking your courage to live your life beautifully in wholeness as a lesson for our own.”

That last paragraph is hard for me to read now. For personal reasons, I have to pull away from the work of the mosque. So I wanted to share this sermon to honor our muhajirun, our congregants. And to honor the ansar, all those who volunteer to help out, those who have founded sister mosques in other cities, and especially El-Farouk and Troy. They are ansar through and through.

Like Loading...
‹ Linden – Taste the Sweetness of Summer by Deanne Quarrie
“THE OLD RELIGION” OR A “NEW CREATIVE SYNTHESIS”? by Carol P. Christ ›