“She had rather been a husband than a wife; and a preacher than a hearer; and a magistrate than a subject.” Reverend Hugh Peter of Salem

Anne Hutchinson was banished from the Massachusetts Bay Colony for heresy in 1637 and excommunicated from the Puritan Church of Boston in 1638. Her banishment came just three years after she, her husband, and eleven living children arrived in America seeking the freedom to practice their religion as they saw fit. Governor Michael Dukakis pardoned her in 1987. Historian Howard Zinn called her a true American hero. 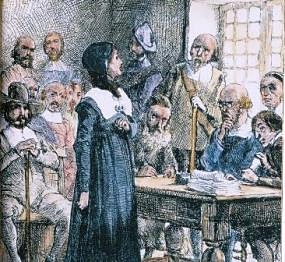 I managed to get through graduate school in Religious Studies without ever having studied the theology of Anne Hutchinson,* though I vaguely remember references (probably with smirks of disapproval) to the “Antinomian Controversy” which is associated with her name. I recall Anne Hutchinson’s name because of an article published in Feminist Studies in the 1970s, when I had just begun to study women and religion. However it was not until recently that I learned of her place in history through reading American Jezebel by Eve LaPlante.

Hutchinson was accused of theological errors in her trials. The Calvinist doctrine of predestination figured heavily in the accusations. But the real issue at stake was that Anne dared to follow her own inner knowing, to articulate it theologically, and to teach her views against the grain of the Puritan authorities in Boston.

Forbidden to speak in Church, women in the Massachusetts Bay Colony were permitted to meet to discuss Biblical passages and the sermons preached about them. Anne’s meetings became so popular that she had to hold two evening meetings a week in the large parlor of her home. At first attended only by women, her meetings began to attract men as well, including the governor of the colony, Sir Henry Vane.

The Antinomian Controversy (the word means against the law) had to do with the Protestant doctrine of justification by grace not works and with the related doctrine of predestination. In theological terms Hutchison held that justification comes exclusively through the gracious choice of God and that works of any kind play absolutely no role at all. In other words, whether or not one is good, and perhaps more crucially for the case, whether or not one follows the rules and laws of church or state, has absolutely nothing to do with whether or not one will be saved.

On the face of it, this is good Calvinist theology, so why was Anne banished for holding Calvinist views? Though they had fled persecution by the church and state in England, the Puritan fathers who banished Anne were engaged in creating a new church and an alternative state; they saw themselves as the proper interpreters of doctrine and scripture and the proper overlords of the new state.

Thus the Puritan fathers modified Calvinist doctrine to their own ends. They declared that following their laws and not questioning their authority was necessary to uphold order in their new community. Anne’s views were called antinomian because she refused to obey the laws laid down by the new authorities of church and state in the new world.

Anne’s refusal to do so was for her a matter of faith—she was unwilling to put any human male authority between herself and her own knowledge of God communicated to her through grace.

Though she herself never converted, Anne’s theological views have much in common with the Quaker doctrine of the inner light and the Quaker assertion that no authorities should stand between the believer and her discernments. True to their convictions, the Quakers allowed women to speak in church and to teach. (Anne’s view of inner knowing might also be compared to the Roman Catholic doctrine of conscience.)

Contemporary radical feminists in religion will surely identify with Anne’s courage of her convictions. Anne Hutchison stood up to male authorities and challenged their views as an equal. She did so knowing that she probably would not be rewarded for what she had done. In fact, she and her husband and family were forced to leave with other families to create a new colony in Rhode Island. After her husband died, Anne felt forced to move with her youngest children to the Dutch Colony of New Amsterdam (now New York), again fearing persecution.

Anne’s is a radical voice. Though she remained a Puritan, Anne was unwilling to modify her views to keep the peace in her community or to keep silent when it might have been politic to do so. In that regard she is a forebear of Matilda Joslyn Gage and Mary Daly.

Nonetheless, while reading her story, I found it difficult to get my head around the fact that Anne was defending a version of the Calvinist doctrine of predestination—the notion that God prejudges souls, choosing by arbitrary will (no good works involved) to save some and to condemn others to everlasting punishment. (Anne’s view of predestination to hell is complicated; there, she argued, God takes account of the bad things those condemned would do in their lives.)

On the face of it, I found Anne’s defense of God’s arbitrary will unsettling. A God who chooses completely apart from relationship with his creatures is the tyrant God I rejected long ago. I view a God who would condemn anyone to hell as abhorrent.

Reading further, I came to see other sides of the theological view Anne defended. Anne’s notion of predestination had the practical effect of allowing her to free herself from Protestant authoritarianism—just as her ancestors had freed themselves from Roman Catholic authoritarianism. I could appreciate that.

There was more. Anne was a midwife. She herself gave birth to fifteen children. Anne would have understood the unconditional love mothers feel for their newborn infants who as yet have done “nothing” to deserve that love. I began to see that Anne’s doctrine of predestination was a way of affirming that God’s love is as unconditional as the love a mother feels for her newborn baby. Like the baby who has just been born, those who are saved are loved unconditionally, apart from any “works” they have done or will do.

For Anne the unconditional love of God was not a harsh cold theological doctrine. Anne stated that she experienced the love of God in her heart. For her this experience was compelling and certain. She said that she had no doubt that she was saved. What this meant for her was that she had no doubt that God loved her and that God’s love had sustained her and would sustain her throughout her life.

I would say that as a product of her times, Anne was forced to couch her experience of the love of God in a view of God’s predestination. I suspect that if she were living today, Anne might have compared the love of God to a mother’s love.

When she settled in New Amsterdam, Anne’s neighbors told her to arm her household to defend against Indian raids. Anne responded that she had always had friendly relationships with the Indians. Though it was not a major theme in her trial, Anne had clashed with the Massachusetts Bay Colony over the notorious Pequot War (in which all of the Pequots were exterminated or enslaved)—a war Puritan leaders believed they had a right to wage because God had given them the new world.

About a year after Anne and her children settled in New York, Anne was warned by her neighbors to leave her home as the Siwonoy Indians were about to seek reprisals for an attack by Dutch soldiers in which eighty Indians had been killed in Manhattan a few months earlier. Anne refused. She and six children were killed and scalped. One of her daughters was captured and adopted by the Indians. The courage of Anne’s convictions led to her death. If she could speak to us from her grave, I imagine she would tell us that fighting with the Indians was wrong and insist that the way of peace is possible. In this too Anne Hutchinson had much in common with the Quakers.

*Anne Hutchinson left no writings. However, the trial documents have been preserved; in them Anne not only answered questions, but choose to elaborate on her theological views in a lengthy statement. My ancestor William Wordell was charged in 1637 and convicted and banished in 1643 for heresy in relation to the ideas of Anne Hutchinson; his wife Mary Gatchell whom he married in 1640 must also have attended meetings in the home of Anne Hutchinson.

Carol has just returned from a life-transforming Goddess Pilgrimage to Crete–early bird discount available now on the 2015 tours.  Carol can be heard in a recent interviews on Voices of the Sacred Feminine, Goddess Alive Radio, and Voices of Women.  Carol is a founding voice in feminism and religion and Goddess spirituality. Her books include She Who Changes and Rebirth of the Goddess and with Judith Plaskow, the widely-used anthologies Womanspirit Rising and Weaving the Visions.  Follow Carol on GoddessCrete on Twitter.

Like Loading...
‹ O Madre Nostra Cara by Kaalii Cargill
Thinking Out Loud About Protecting Our Borders and the Ebola Crisis by Kelly Brown Douglas ›