Home › Childbirth › The Goddess of Willendorf and Does My Uterus Make Me Look Fat? by Molly

The Goddess of Willendorf and Does My Uterus Make Me Look Fat? by Molly

“Loving, knowing, and respecting our bodies is a powerful and invincible act of rebellion in this society.”
~ Inga Muscio

I do not remember the first time I ever saw her, but I do know that I have loved the Goddess of Willendorf sculpture for many years. When someone uses the phrase, “Great Goddess” or “Great Mother,” she’s the figure I see. To me, she honors the female form. I love her full-figure and the fact that she is not “perfect” or beautiful. I love that she is not pregnant* and what I like best is that she is complete unto herself. She is a complete form, not just a headless pregnant belly. She represents a deep, ancient power to me.

I have a strong emotional connection to ancient Paleolithic and Neolithic goddess sculptures. I do not find that I feel as personally connected to later goddess imagery, but very ancient figures call to something deep and powerful within me. I have a sculpture of the Goddess of Willendorf at a central point on my altar. Sometimes I hold her and wonder and muse about who carved the original. I almost feel a thread that reaches out and continues to connect us to that nearly lost past—all the culture and society and how very much we don’t know about early human history. There is such a solid power to these early figures and to me they speak of the numinous, non-personified, Great Goddess weaving her way throughout time and space.

via Echoes of Mesopotamia by Molly Meade |.

Ancient goddess figures are commonly and frustratingly described as “fertility figures” or as pregnant, but most of 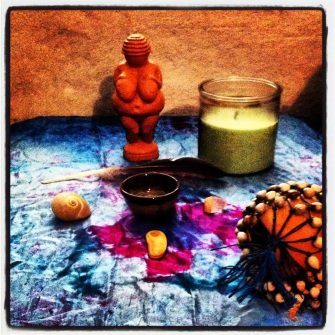 the early sculptures do not actually appear pregnant to me, rather they are simply full-figured. One of the things I love about the Willendorf Goddess is her air of self-possession. She is complete unto herself. She may be a fertile figure, but she is not clearly pregnant and she does not have a baby in her arms, which indicates that her value was not exclusively in the maternal role. Early goddess figurines are usually portrayed alone, it is only later that we see the addition of the baby figure at the mother’s breast or in arms. Logic would indicate that if ancient figures were indeed fertility figures, the presence of a baby would actually be more indicative of fertility than a large-breasted woman is, particularly since pregnancy, notably in ancient times, is not a guarantee of a live baby and the generativity babies represent.

…to associate the goddess with ‘fertility’, and even ‘earth mother’, again limits the image of woman to a fertile mother – the creature the patriarchal male created, his baby-making machine. What’s happening with all these descriptions is that the goddess is being limited to areas where women, in the patriarchal male-seed era, were confined. There seems to be a patriarchal veil of prejudice preventing the goddesses being seen as the source of wisdom, magic, fate, inspiration, change and spirituality – none of which need have anything to do with having babies, or making plants grow. Yes, women have babies, but that’s not all they do, or are.

The earliest known goddess figures are independent of specifically maternal imagery, it is only later that we begin to see Goddess defined in relationship to children or as exclusively maternal. I think this reflects a shift that women continue to struggle with today, in Goddess religion as well as personal life, with the mother role seen as exhaustive or exclusive. In contemporary society, the only mainstream representation of the Goddess that manages to survive under public recognition is the Madonna and Child and here, not only has Goddess been completely subsumed by her offspring, she is no longer even recognized as truly divine.

The Willendorf Goddess has been a potent affirmation for me many times in my life. One Mother’s Day, my then four-year-old son found a little green aventurine Goddess of Willendorf at a local rock shop: “We have GOT to get this for Mom!” he told my husband and they surprised me with it that afternoon. It still makes me get a little teary to look at it, because it was such a beautiful moment of feeling seen and acknowledged by my little child.  When I found out I was pregnant for the third time, my husband surprised me with a beautiful Goddess of Willendorf pendant. I was holding onto that pendant during the ultrasound that told us that our third son no longer had a heartbeat. During my labor with my little non-living baby, I wore and held onto the pendant. It went with me to the emergency room and I could feel the solid, reassuring weight of her against my chest when dressed in a hospital gown, IV fluids moving into my arm, while blood continued to spill from me as my body said goodbye to my baby. I buried a Goddess of Willendorf bead with my baby’s body and put a matching one on his memorial necklace.

On Mother’s Day the following year, right after finding out I was pregnant with my rainbow baby girl, my husband

gave me a beautiful new Goddess of Willendorf ring. I was little scared to wear it, because what if the ring too, became a sad reminder of a pregnancy lost, but wear it I did up to and through the moment when I caught my sweet little living girl in my own grateful, be-ringed hands.

The website from which the ring was purchased disappeared and I didn’t see another ring like it until I became a retailer for Wellstone Jewelry. While on the phone making an order, I requested one of their Venus of Lespugue pendants. The woman on the phone told me, “we don’t sell very many of those. She seems to make people uncomfortable. In fact, we used to make a ring too. A Venus of Willendorf ring, but no one ever wanted her. I think because she is ‘too fat’ and she makes people feel weird.” Oh my goodness, I replied, I think I have one of your rings! I emailed her a picture of my hand and sure enough, though discontinued, I’d coincidentally gotten one of the last of the rings ever made. 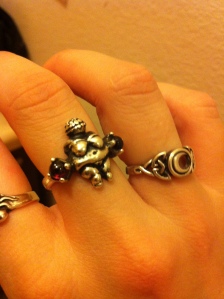 What does this have to do with my uterus making me look fat? Well, I’ve had the experience of wearing my ring and having another woman, a wonderful, peaceful, gifted, gentle healer of a woman, laugh at it, like it was a joke ring. My mom sold a pottery sculpture version of the Willendorf to a man at a class and he laughed at this wonderful image as well, saying, “this is hilarious.” Hilarious? Because she is fat? Or, is it something else? Several years ago, I read a post online titled Does My Uterus Make Me Look Fat? and I thought of my beloved Goddess of Willendorf, She of the Ample Uterus. While I can no longer locate the article itself, I remember the mention that even pre-teen girls have a slight swell to their bellies. The author of the post essentially said, “duh, a completely flat belly IS NEVER POSSIBLE. THERE IS A UTERUS IN THERE.” When I read it, I thought about women not liking the Goddess of Willendorf ring because she is “too fat.” And, I thought of a couple of quotes I saved from the Our Bodies edition of Sage Woman magazine (Spring, 1996):

…so it has been: women’s power has declined as woman’s belly has been violated and shamed…5,000 years of patriarchal culture has degraded belly, body, woman, the sacred feminine, the soul, the feminine sensibility in both women and men, native peoples, and nature–all in a single process of devaluation. Because our belly is the bodily site of feminine sensibility, our patriarchal culture marks the belly as a target of assault, through rape, unnecessary hysterectomies and Cesarians [sic], reproductive technology, legal restrictions on women’s authority in pregnancy and childbirth, and belly-belittling fashions, exercise regimens, and diet schemes…a culture that literally hates women’s guts…

Our bodies are vessels of the sacred, not the homes of sinful urges. Our bodies create and sustain the sacred. And that sacredness does not equate with any artificial notion of bodily perfection. All of us are fit habitations for the divine, no matter what the diet doctors, fitness gurus, health good fanatics, New Age healers, and the fashion police try to force on us. If we don’t take our bodies into account in our expression of [our religion], then it becomes a mere shadow of itself. When we are fully present in our bodies [women’s religion] becomes a three-dimensional, vibrant, fully fleshed-out expression of the divine…

–DeAnna Alba in How to Flesh Our Your Magick

Even though I am a goddess sculptor myself, I have never been able to make my own version of the Goddess of Willendorf that satisfied me. I tried polymer clay, I tried pottery clay, I tried making my husband make one for me. None of them were right. Finally, my husband said, “why don’t you just make one using your own style?” This was the epiphany I needed and it worked! I successfully used the same technique and structure I use for all of my sculptures, but with a Willendorf-twist and I finally made a figure I’m proud of. My husband made a mold from my sculpt and cast her in pewter and I wear her as a pendant when I need to feel powerful and confident. Her uterus might make her look fat, but to me, she is one of the most powerfully affirming images of womanhood I have ever encountered and there is nothing funny about her.

“Your body is your own. This may seem obvious. But to inhabit your physical self fully, with no apology, is a true act of power.”

Molly Meade is a priestess, writer, teacher, artist, and activist who lives with her husband and children in central Missouri. She is a doctoral student in women’s spirituality at Ocean Seminary College and the author of Womanrunes: A guide to their use and interpretation. Molly and her husband co-create at Brigid’s Grove: http://brigidsgrove.etsy.com and she blogs about theapoetics, ecopsychology, and the Goddess at http://goddesspriestess.com.

*There is some disagreement about whether or not the Willendorf goddess is pregnant or not and many people do describe her as pregnant. However, I feel confident she is not intended to depict pregnancy.

Like Loading...
‹ Painting Women from Judges – Part 1: Jephthah’s Reflective Daughter by Melinda Bielas
Must Pluralism Be Noisy? by Esther Nelson ›