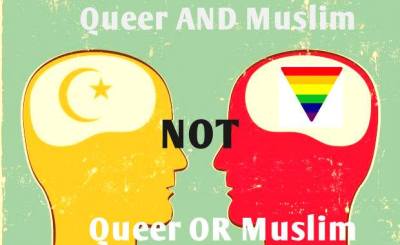 Most of the time, when we talk about being “Queer in Islam,” we identify the term with a hermeneutics developed by or on behalf of LGTBQI Muslims in order to allow their inclusion in religious spaces and recognize their agency in matters of faith.

Is not my intention to appropriate the voice of LGTBQI Muslims in this issue, just to share my reflections about a topic that deserves a larger and deeper treatment.

Theologies, mainly monotheistic, have served to justify and reinforce the heterosexual paradigm and have thereby fed the installation of hegemonic speeches against anyone who cannot be categorized within their narrow representations; such persons have been labeled as QUEER.

Of course, it can be said that Islamic theology nowadays is strongly heterosexual. I am not referring here exclusively to what concerns sexual orientation, but about heterosexuality as a compulsory system aimed to control and discipline roles, status, relations of production, class, race, emotions, embodiment, hierarchies, attitudes and sexual behavior of people under the opposite and exclusionary categories of man and woman.

While I respect the right of individuals to name their gender identity and sexual orientation as they wish, I think it is important to remember that labels like gay, lesbian, the idea of queer itself and other categories are expressions born out of a hegemony regarding the body, sexuality, and identity about people. This hegemony results in the active “othering” of certain person; “othering” out of a position of privilege, of power, to define, for example, what is normal and what is not, who are the majority and who are the minority, how this minority must behave and the spaces where they must remain.

Marcella Althaus-Reid affirmed that heterosexuality is a sexual ideology. It does not come from God but has been used in theology in an artificial, Western, white imperialist way. There are actually many cultures who define sexuality and relationships in diverse and varying ways.

When we talk about queer in Islam as a concept limited to sexual orientation, we are parceling out a resistance that should be common, though diverse. We risk reproducing the same invisibility against groups that are already silenced and invisible in other spaces like lesbians, bisexuals, financially underprivileged Muslims, converts from the third-world, and non-Arab Muslims, for example; intersections between colonialism, privileges and androcentrism appear even in these struggles.

As can be true in mainstream Islam – regardless if it is Sunni, Shia or Sufi – a hetero-centered paradigm is presents in some narratives of Islamic feminisms, and can likewise be homophobic and oppressive. In some of them, LGTBQI are discriminated by omission. For example, such as when feminism is confused with “highlighting the contribution of women in Islam” and does not criticize embedded patriarchal systems. In other occasions, talk about “Queer in Islam” that describes the matter with tenets like “it is a minority’s issue,” “we condemn the sin but not the sinner,” “they can do whatever they want but it is haram to talk about private life,” “LGTB activism divides the struggle, we are all against racism here,” and other such expressions, reflect a double standard and slight bigotry.

While acknowledging that the Koran does not define spiritual experiences according to sex or gender, I think we need to broaden the spectrum of “Being Queer” when it comes to challenging patriarchal theology in Islam. This means being “non-heterosexual” in relation to a widening normative paradigm and committing to the developing of a theology that challenges a mainstream that not only is exclusionary against sexual diversities but against people that are being “othered” for reasons of race, origin, life styles and gender performances.

I propose using the term “Queer in Islam” as related with a theology of dissent. Dissent of all that is spiritually, physically, emotionally, intellectually, sexually, religiously and behaviorally normative. Queer as an alternative to mainstream; dissent as a response to hegemony.

Inclusive Islam is not merely adding people under a hetero-centered umbrella or giving LGTBQI the same things that hetero people have. For me, it goes beyond this. If each of us has a reason to be queer in relation to mainstream, I wonder: Is inclusion what we aim as the ultimate edge in this struggle or a theology of our own? What about a theology made from a place of dissent, where being “queer” maps out a space of resistance not just to oppose but creatively to construct, re-imagine and envision a different kind of world?

The theology of the master will never dismantle the master’s mosque.

I’m not seeking to engulf the struggle of LGTBQI brothers and sisters; universalist activism always favors those who are already privileged while silences those who are already invisible. I am talking about encouraging an Indecent Theology in Islam: A theology of no scholars, no authorities of any kind; that is not given from above, but starts from the grounds and the basements, with people’s lives and critical experiences without censorship. A theology that invites people to come as they are, and to come out of all the closets they are living in. A theology of liberation made from subjectivities and the stories of individual, that results from our personal agency to build a paradise according to our social class, race, language, gender, identity, lifestyle and particular quirks. If Islamic feminisms declare themselves a movement and a perspective of dissent from patriarchy in Islam, then Islamic feminisms must be a Queer Feminism based in an Indecent Theology without hesitations.

From this queer perspective as a Muslim and Feminist I have no gender, no sex, no color, no race and there’s no struggle for social justice out of my league. Because I am queer I am all sexes, all races, all gender, all colors, all emotions and all struggles. As Brandon Wint says:

Vanessa Rivera de la Fuente is a Writer, Mentor and Community Educator in Capacity Building for Grass Roots Female Leaders and Advocates. A Muslim Feminist who is an Independent Researcher of Gender and Islam in Latin America on Feminist Hermeneutics, Muslim Women Representations, Queer Identities and Movement Building. She blogs in Spanish at Mezquita de Mujeres, a site dedicated to explore the links between Gender, Religion and Feminism as well to Women from the Global South as Change Makers in their communities.

Like Loading...
‹ President Obama, Angelina Jolie, and the State of the Yazidi Genocide by Michele Buscher
The Difficult Issue of the Origins of the Buddhist Nuns’ Order by Oxana Poberejnaia ›