This short paper was part of a series of assessment pieces for university where we had to imagine ourselves as people living in a number of ancient cultures. It addresses a very direct question: “Imagine you are in Ancient Greece sometime during the 5th century BCE and a family member is preparing to be initiated into the Mystery Rites at Eleusis. You have come to support them and join in the festival. Briefly describe your experience?”

It is the month of Boedromion (Late September/Early October) and the sixth day of the Eleusinian festivities held annually in the great city of Athens. I travelled some distance to take part in the nine-day festival held in honour of the ‘Greater Mysteries’ for which my niece prepared as an initiate. The city is alive with women, men and children from near and far. Many have come to take part and fulfil the countless functionary roles associated with the festival, along with the great crowd of initiates who have spent the past three days fasting and ritually preparing.

I came to the festival not only in support of my niece but to pay homage and honour the Goddess of agriculture Demeter and her daughter Persephone with whom the site is dedicated. Last season’s crops were afflicted by unforseen weather, and the village I come from suffered immensely. Therefore I also come to make an offering to the Goddesses in hope that the harvest will fare better than the year past. This is the first time I have made pilgrimage to the festival, and I have enjoyed every moment so far, especially the all-night celebration in honour of Asclepius the eve before last. Today however, I wake in anticipation for we are to follow the crowd of initiates who will lead the Iacchus procession out to the sacred centre of Eleusis.

Before sunrise, led by Iacchus, whose statue will be carried all the way to the sacred site, the silent march of the mystai (initiates) begins. There are many men and women prepared and ready to enter the mystery rites in hope to secure an improved afterlife. Guided by the torchbearers flame they depart solemnly. The sombre and formal atmosphere dissipates with their departure as the rest of us gathered fill the air with sounds of anticipation and excitement. As the sun greets us we procession following the footsteps of the initiates. Starting from the bottom of the Eastern side of the Acropolis on the edge of the Agora we follow the Sacred Way. Many start singing, dancing and crying out “Iacchos, Iacchos, Iacchos, O Iacchos”.

Swept up by the frenzy of excitement I join in the song and dance and cry out until my voice is hoarse. We stop to perform rites and sacrifices along the way and as we cross the river Cephius, a group of people standing by the bridge mock us and shout insults. I am sure the roar of laughter from the crowd is heard for miles. While the procession takes a number of hours to walk the fourteen miles, it feels like a matter of moments before we reach the sanctuary that rises up a number of terraces on the edge of a small hill. The sanctuary of Eleusis was built not for architectural glory such as the colossal temple to Athena in the city centre, but rather as a place for people to display gratitude and piety towards Demeter and Persephone and for initiates to continue in the tradition of the mysteries that have been enacted for many, many centuries.

On the widest terrace is the Telesterion. It has been rebuilt numerous times over the past few centuries, most recently remodelled by Iktinos.[1] It is in here, on the eve of the seventh night, after purification and the sacrificing of pigs that the initiates will take part in the three stages of initiatory rites. Since the time of Solon[2], the Anaktoron, in the centre of the great hall acts as the central space used at the climax of the mystery rites. It is in here that the great image of Demeter is also housed. This space is forbidden to those not undertaking initiation. The rites are kept in highest secrecy.

Upon entering the initiates greet us in a sacred dance performed by the Callichoron Well. It is here at the sacred well that I make dedication of a small marble statue to Demeter and pray for my niece and for a bountiful harvest. There are so many votives, small and large offered to the goddesses, I wonder if there will ever be enough room to house them all. This is as far as I can go. I make my way back North East through the outer sanctuary, to the sacred way and journey back to the city centre where I will continue to celebrate and await till the ninth day when the procession of initiates will return.

A votive plaque known as the ‘Ninnion Tablet’ depicting elements of the Eleusinian mysteries, discovered in the sanctuary at Eleusis mid 4th century BCE.

This journey of both participants and initiates to the sacred centre of Eleusis enacts the journey of descent and return represented in the myth of Demeter and Persephone. Their story is valuable for many reasons. For instance: the archetypal qualities of Demeter as mother can help us with mothering, healing mother daughter relationships, womb healing, nurturance, abundance and grief. The myth also represents the creative cycle. In her book ‘The Creative Fire’ Dr. Clarissa Pinkola Estes describes the creative cycle as one of a:

She captivatingly tells the story of Demeter and Persephone and describes how their journey of descent and return aligns with this cycle. Their story therefore is even more valuable for Persephone’s abduction into the underworld by Hades can be seen as a metaphor for how people have suffered by being abducted from their own creative spirit. Demeter as mother and Goddess of harvest and fertility can also be seen as the mother of creative potential. Her gift is to show us how to nurture what is yet to become.

I recently held a workshop ‘Painting Demeter’ – an inquiry into the creative cycle, self-nurturance and an honouring of the mother line. Demeter came to remind me to be gentle with myself. As a mother, my job like Demeter’s, is to nurture what is yet to become. 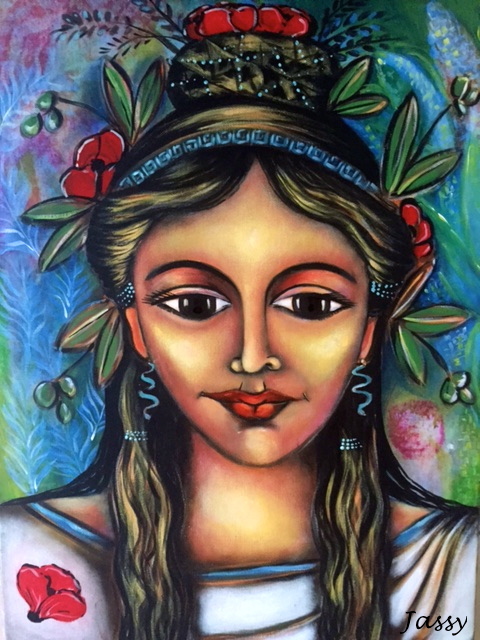 Jassy Watson, who lives on the sub-tropical coast of Queensland Australia, is a Mother of four, passionate organic gardener, Intuitive/Visionary Artist, Intentional Creativity Coach and a student of Ancient History and Religion at Macquarie University, Sydney. She is the Creatress of Goddesses Garden, Studio & Gallery; a school for the Sacred Creative Arts. Jassy teaches regular painting workshops in person, nationally and internationally, and online based around themes that explore myth, history, earth connection and the Goddess. Jassy will be journeying to Eleusis later this year after she guides her first International Painting tour on Lesvos. You can see more at www.goddessesgardenandstudio.com

Like Loading...
‹ What “I Believe” and Found Worth Sharing by Xochitl Alvizo
The Dance of Memory, Part 2: The Wishing Tree Laura Shannon ›