Home › Academics › Is There a Such Thing as a Code of Ethics in Academia?  by Michele Stopera Freyhauf

Is There a Such Thing as a Code of Ethics in Academia?  by Michele Stopera Freyhauf 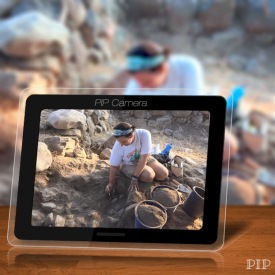 One of things that has dismayed me since I began graduate school and started focusing my study on the Bible, is how much sensationalism exists. We are told in the academy not to use Wikipedia or watch the History Channel. The first, as we know, is unreliable due to the fact that anyone can enter information and make changes. The other caters to the general public. What compounds this problem is the fact that scholars, many times – even reputable ones – appear on these shows. Sometimes creative licenses are exercised by the producer distorting or otherwise shifting the message of what the scholar was trying to explain. Other times, scholars will just give the producers and the public exactly what they want to hear and thus perpetuating myths rooted in literalism. 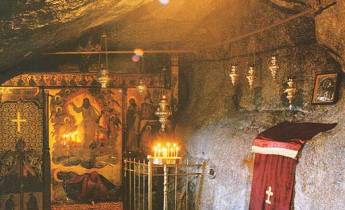 Cave in the Church of the Apocalypse in Patmos, Greece

This is not the only time this issues manifests.  The other time I encountered this is when I travel to sacred or holy sites in the Middle East.  The people in charge of sites may want raise money and increase tourism – so they give the people what they want.  What do I mean by this?  Walking into a place that has a story whether true or not provides pilgrims a sense of awe and wonder.

Certainly I am not saying that this experience should be diminished or should be taken away. What I am saying is that we should be a bit more truthful in our descriptions and remove the shroud of literalism that seems to fuel tourism and not faith. What was difficult for me when visiting Patmos is the rhetoric surrounding the island. It may or may not have been where John had his visions, but certainly the mystique surrounding the Church of the Apocalypse seems to perpetuate the literalism that surrounds the Book of Revelation as being prophetic in dealing with the end times.  Moreover, the vendors around the Church certainly focus their merchandise to support this myth.  However, while I study the Book of Revelation and teach that it is something other than prophetic, a person visits the island and the church, are told that it is prophetic – who is a person to believe?   Me or the religious order running the Church or the vendors living on the island?

This also happens at dig sites.  If a tourist is led by a guide or lead at a holy site being excavated and they tell them what they want to hear so they come back and tell their friends, who has more creditability – me or the person who guides on the site?  When scholars like myself, write about a topic that seems to gel with what the commonly held view of the academy, and goes against literalism or fundamentalist beliefs, we become heretics in relation to the information being fed by the sensationalism on the History Channel and the tourist industry.  So the popular view does not change and the academic view is left on the margins and Biblical literalism wins.

Why should I care?  When people buy into the literalism of Eve as the source of humanity’s downfall or scripture that tells women to be submissive to their husbands and to not speak in Church and refuse to accept the text for what was actually meant to be (a revealed word to the reader, not a history book, novel, or book of ethics), how are we able to break the chains that continue to fuel 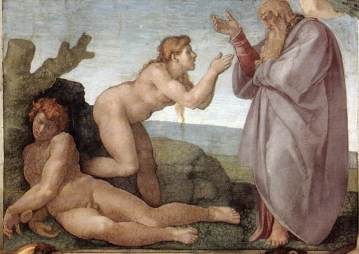 the fire of prejudice and oppression? We see these myths permeating society and bleeding into doctrines of the Church; so it is very important, to promote social change, change perception, promote interfaith unity, and the reasons go on.

How do we make progress then?  The only way to make progress in the area of religion is to do what we do in the classroom, distinguish what a religion of faith is from religion of history. People need to be open to that notion. Moreover, I also think it is important to really take the time to understand other faith traditions – only then will the commonalities emerge and we can see that we really all want the same thing.

Finally, I think it is critical to study scripture through a myriad of lenses and really invest in your faith or belief. I tell my students to invest in their own belief systems and take ownership in their faith. We investigate new cars before we buy them and will not readily take the word of a salesman or the person selling the vehicle, why would a person turn a blind eye to their our faith?

This is an issue I have wrestled with since stepping back on the college campus many years ago. I am not sure if it is my many decades working in the legal field, where there is an ethical standard in place, or my focus and training as more of a historian than a theologian, where things are more factual and less subjective. So I put this issue out for discussion. Where is the balance and what is the answer? Should there be a code of ethics in academia? and if so, what should it be?

Michele Stopera Freyhauf is a Ph.D. Candidate in the Department of Theology and Religious Studies and a Member of the Centre for Catholic Studies at Durham University as well as an Instructor at John Carroll University’s Department of Theology and Religious Studies and Ursuline College’s Department of Religious Studies. Michele has an M. A. in Theology and Religious Studies from John Carroll University, and did post-graduate work at the University of Akron in the area of History of Religion, Women, and Sexuality. She is also a Member-at-Large on the Student Advisory Board for the Society of Biblical Literature and the student representative on the Board for Eastern Great Lakes Biblical Society (EGLBS). Michele is the 2015 recipient of the P. E. MacAllister Excavation Fellowship where she participated in the Bethsaida Archaeology Project.  Michele is a feminist scholar, activist, and author of several articles including “Hagia Sophia: Political and Religious Symbolism in Stones and Spolia” and lectured during the Commission for the Status of Women at the United Nations (2013 and 2014). She also wrote “The Catholic Church and Social Media: Embracing [Fighting] a Feminist Ideological Theo-Ethical Discourse and Discursive Activism” that appears in the recently released book, Feminism and Religion in the 21st Century: Technology, Dialogue, and Expanding Borders, edited by Gina Messina-Dysert and Rosemary Radford Ruether. Michele can be followed on Twitter @msfreyhauf and @biblicalfem. Her website can be accessed here and is visible on other social media sites like LinkedIn and Google+.

Like Loading...
‹ Artio, Celtic Goddess of Wild Life, Transformation and Abundance by Judith Shaw
I Am A Woman’s Poet by Marie Cartier ›