Last month, I went to a conference in San Antonio, Texas. Feeling overwhelmed by the combined elements of work, family, and creative writing, I did not have much of a desire to go. It was right before Valentine’s Day, which I try to celebrate with the kids, especially since my oldest is named Valentine. The house was not clean. I was not packed. I had not bought or helped fill out cards for the kids to distribute in the classrooms, nor did I remember whether I had signed up to bring in juice boxes or cupcakes. I just wasn’t ready to travel.

Beyond that, I developed some health issues last year that impact my daily life. I have found it hard to recognize the consequent shifts in my energy or output as legitimate bodily realities. I must be imagining it, right? I’m not this tired really… just lazy or something. Among the things impacted, my vision is sometimes dark and distorted. Plus, I broke a toe at the beginning of January, and I am still limping. As I imagined traveling alone, I felt myself wondering whether I was up to trekking through the airports with a broken gait, blurred vision, and the fatigue that sometimes quite rapidly descends when I least expect it. I didn’t want to go.

To top it off, I knew I wasn’t going to a regular hotel. I was going to the Oblate Renewal Center. I felt I could handle the Riverwalk and a couple nights at the Hilton, but I was really questioning whether I was in the right mental space for a retreat center. I was not feeling still, nor did I really want to be still. I had too much to do, of course. I compounded that feeling by stopping off on my way there for a short visit with my sister’s family at the point of my flight’s connection, where she and I drove around for hours picking up and dropping off her five school age children at their various extra-curricular activities. When I eventually made it to the retreat center, I was very much decentered in my own skin and underprepared mentally. I had neither gifts to bring nor expectations about what I would take home.

And this led to something remarkably beautiful…

In my less than excellent state of mind, I checked in, found my room, and fell asleep for a little while. Realizing that I had slept through dinner, I had to scramble to get to the opening address. It was already dark, and the place is a labyrinth of meandering walkways, marked by religious images, shrines, and the stations of the cross. Earlier when I had arrived, I had not seen registration packets, so now I didn’t know where I was going. I was wandering, with my already dimmed vision, in the dark. I saw a building with a light and knocked on a locked door, but the guests there did not know where I was supposed to go. When I tried to leave, I discovered that I was now locked in where I had formerly been looked out. As I became anxious about the time, I walked more quickly, causing me at one point literally to fall off the path. Just as I was experiencing myself to be a ridiculous litany of clichés, I looked up to find this: 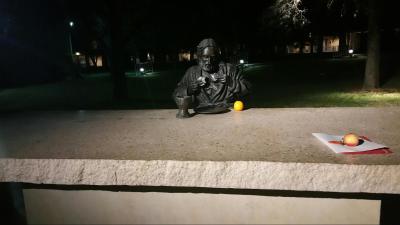 It was an impressive, slightly larger than life-size, bronze Jesus at the table, surrounded by block seats for people like me to sit down and have a chat, an orange, or a quiet moment. It struck me as profound, and I kept going back to it over the next few days. That first night, the talk (which, I did find on time) was about multicultural diversity and the needs of changing church demographics in the US today. The speaker commented about an African student who saw in this sculpture Black Jesus. As such, when I walked home that night and stopped off for another visit (as I would do repeatedly over that weekend), I did so with Black Jesus, sitting there with his humble cup and bread. The more I sat with him, the more I felt as though I sort of fell in love. Here I did not see his glory or his suffering or his atonement, but his humanity and his warmth and his accessibility.

Over the next several days, the emphasis of the conference talks was on meeting the needs of growing Hispanic/Latino Catholic populations in the US. I myself was impressed by the conversation, but I noted certain omissions. Other, non-Hispanic ethnic populations, including African-Americans, were given very little consideration. In all the talk of culture, moreover, I found myself considering culture as not only what constitutes some combination of ethnicity, language, and customs associated with our original social organizations but also culture as how and with what we identify. So, youth culture(s). Gay culture(s). Media culture (s). And so on. Surely, I felt these have much to do with what shapes the body of believers in today’s world, and they significantly define how people receive and respond to church teaching.

The underlying question to me seemed to be one of hospitality. To whom is the church hospitable? Who is really invited? Who gets to sit down at the table? And, when they come, are the guests made to feel welcome?

As I sat with Black Jesus, I observed that he seemed thin. In this work of devotional art, I began to see a huge range of human potentialities and needs, from his thinness to his physical frailty to his ultimate vulnerability. Suddenly, he was not the one who cures the marginalized and brings them into the fold. He was the marginalized. His message became not one of restoration or healing to a state of normalcy but a disruption of the insistence on normativity and conformity by the privileged. Because of the interactive nature of the table, I had the opportunity to sit down beside all of these potentialities as they played in my mind. Jesus’ Incarnation took on new meaning for me. It became a story of grace in the human as human as opposed to a story of standardizing what is perceivable or tolerable as graced humanity.

The experience was a beautiful revelation for me, and it inspired a poem, which I’ve been carrying in my heart ever since. Before I left for the weekend, I tucked this into his breast: