Mary, Mary, quite contrary,
How does your garden grow?
With silver bells and cockleshells
And pretty maids all in a row.

From her lips to our ears.

Who wrote that poem? I’ve heard that some so-called scholars think it’s about a queen of England named Mary Tudor (slandered as “Bloody Mary” because she stuck to her religion after her father declared himself head of his own bloody church) or Mary Queen of Scots (slandered for other reasons, and then murdered). Well, much as I feel sorry for those two queens, the poem’s about me, and I don’t grow any little garden. I am a gentlewoman farmer. The fellow who wrote that silly poem probably works for one of those corporations that want to buy my land and plant their engineered crops on it and create monocultures that murder the land.

Those silver bells? Not flowers, Mr. Poet, not ding-dongs. Silver money rings when you drop it on a wooden table. My partners and I have lots and lots of such silver bells, I’m glad to say, and they’re in a safe place and we give ’em to people who need some help. Cockleshells? I don’t have a clue. I think someone was just looking for a rhyme. But he’s not a poet. He’s a mere versifier. A rudesby. A rhymer. And those “pretty maids”? That’s my crews, all the gals that work with me, and none of us are ever “in a row.” We’re usually too busy working the rows of crops in the fields to just stand around in rows. So there, Mr. Rudesby Rhymer! You can take your silly poem and put it where—uh, yes, I guess I’m pretty contrary. In your eyes. In the eyes of the rich old capitalists you work for.

Although my partners and I hold legal papers that say we own our land, we all know—as those rich old men don’t know—that no person can own any part of the planet. I like to think what we have is a sort of long-term lease. (Some people say we’re the “stewards” of the land. That word works for me.) The land is sacred, our whole planet is sacred. It’s the embodiment of Gaia, and everyone who lives on the land—animal, vegetable, or mineral—is a child of Gaia. Everyone’s a child of the planet, a child of the land. So there, Mr. Rudesby Rhymer Employed By Greedy Old Men.

We gentlewomen farmers cherish our land, not only the fields of corn and wheat and barley, but also the root crops under the fields and our beautiful flower gardens and even the precious wilderness. Our animals have their own parts of the land. There’s fields of grass for the cows and horses and pigs and sheep. Enclosed yards for the poultry. Fresh water for the water birds and the fish. Places for migrating birds and animals to rest. We honor these creatures…….well, yes, sometimes we have to kill a few so we can eat, but we always do the killing with proper ceremony in the proper season and with prayers to Gaia and other appropriate gods and goddesses.

And we honor our land on the eight sacred days of the year. We perform the old rituals handed down by our mothers and foremothers from time out of mind. We have some dandy celebrations. (We’re already building this year’s Maypole.) We bless the land and hold rituals that marry our sons and brothers to the Goddess (represented of course by us girls). Is that fun, or what? There’s nothing like a good, sexy celebration. No, Mr. Rudesby Rhymer In The Grip Of Greedy Old Men, we’re not just “pretty maids all in a row.” We have menfolk who love us and love the Goddess. So there!

So, Mr. Capitalist-Exploiter-Rudesby Rhymer, our garden is growing because we’re not digging it up for precious minerals, we’re not drilling oil wells in it, we’re not poisoning it with chemical fertilizers. We’re not killing our wild cousins, though, yes, we do build fences to keep out the ones that want to eat our veggies. But we’re not hunting and shooting wild animals for sport! We’re letting them have their own land, which we leave undisturbed. No clearcutting for us. No mines or pipelines. So there!

Mr. Rudesby Rhymer, here’s a story for you. Once upon a time, so long ago our foremothers also said “once upon a time,” there was a god who built his own private garden and walled it in and planted what he thought was the tallest, strongest, bestest tree there ever was. Then he planted a couple people in his garden, and he took to walking around every afternoon and talking to himself about how wonderful he was. He kept those people ignorant, and when the lady tried to gain an education (I must say, she was so dumb she thought she could eat fruit…and maybe the fruit would talk to her?), that jealous old god drove them out of his garden and locked the gate behind them.

What a funny story! Hey, Mr. Know-It-All Rudesby Rhymer—d’you know where those people went? Of course you don’t. Well, we gentlewoman farmers know, so I’ll tell you. They came to visit our foremothers on their land. And they would’ve lived happily ever after in our gardens, except that that jealous old god sent armies—I guess he grew ’em like that hero of another old story did, by sowing either dragons’ teeth or stones, and those teeth and stones hatched men with weapons. But that’s another story. Well, anyway, he sent armies to conquer us. He took a lot of our land and took a lot of us captive. So did that so-called prophet that dispatched his armies across the lands. Armies are generally pretty ferocious, so a lot of our lands and gardens and farms were taken away from us. Our ancestors were either massacred or captured or enslaved. Or all three. Maybe it’s not such a funny story.

Mr. Rudesby Rhymer, you tell lots of stories. But because you’re so beholden to your employers and sponsors, you get the stories wrong sometimes. I’m a gentlewoman farmer, and what I’ve just told you is the true story. Gee, I guess you’re right about one thing, though. I am pretty contrary. Hooray for contrariness! 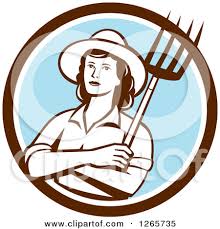