In an earlier blog I asserted that one of the hallmarks of good theology is understanding that the only valid source of authority is to be found in individuals and communities that continually interpret and reinterpret texts and traditions in new situations.

For most of its two thousand year history, Christian theology was understood to involve rational reflection on revealed truths. It was assumed that revealed truths found in the Bible, the decisions of church councils, and church traditions are a fixed set of facts (such as the death and resurrection of Jesus Christ) and doctrines (such as the Trinity) that are eternally true. It was further thought that the theologian is able to rise above his body and history in order to contemplate these eternal truths. Thus, it was said, theology considers eternal truths from an objective and essentially unchanging vantage point.

For the past several hundred years, theologians have begun to realize that both of these traditional assertions are false. There is increasing recognition that the Bible can no longer be understood as having been dictated by God. Instead, revelation (if it exists at) comes through the minds and bodies and experiences and histories of those who write the sacred texts and doctrinal statements. Revelation can only be expressed in the language or languages known to the individual or group who receive it, and experiences and ideas will inevitably be conveyed using symbols and metaphors taken from a wider cultures.

As “the process of interpretation” is acknowledged, it is also understood that theologians can never reflect on eternal truths in any simple way. They must consider the circumstances in which facts and doctrines are received and written down. Some seek to remove the wheat from the chaff, hoping to discover a kernel of eternal truth encased in language and symbols that are relative. Thus, for example, it has become commonplace for liberal theologians to say that the kernel of truth in Genesis 1 is that God created the world, while the story that He created it in 6 days is not literally true.

While non-fundamentalist theologians generally understand that the process of interpretation of revealed truths is complex, they have been less eager to turn a critical eye on the standpoints from which they carry out the process of interpretation themselves. Many theologians recognize the relativity of all standpoints in principle, yet do not hesitate to assert that they have found “the true” meaning of a particular text or tradition. Rosemary Radford Ruether believes that her reading of the Bible from a liberation perspective is more true to the original meaning of the texts than alternative readings. Elizabeth Schussler Fiorenza, in contrast, always qualifies her readings, stating that what she asserts about the early Jesus tradition is true from the perspective of “wo/men seeking liberation.”

Schussler Fiorenza’s position is rooted in “standpoint theory,” which argues that every interpretation of a text or tradition is influenced by the standpoint of the interpreter. Taking standpoint theory seriously means that we cannot make statements like “the message of Jesus was concern for the poor” without adding that this interpretation is made “from a liberation perspective.” This qualification makes a lot of people—and not only fundamentalists—uncomfortable, because it means that all so-called “truths” are in fact relative to those who assert them.

It is not surprising that those whose voices are relatively new to the theological conversation are more likely to acknowledge their standpoints than those writing from traditional white male European perspectives. Many white male theologians continue to believe that they are writing “theology,” while theologians of color and female theologians of all colors are writing from particular perspectives. When theologies are acknowledged to be perspectival, more often than not, the perspective is a general one, such as “black,” “Asian,” “African,” “feminist,”  “womanist,” or “queer.” But even standpoint thinking can fail to be inclusive. A ground-breaking book on black women’s studies pointed out that All of the Women Are White, All of the Blacks Are Men, But Some of Us Are Brave. By the same token, some have wondered why all of the feminist theologians (who are invited to contribute to books and conferences) are Christian. And so on.

In our new book Goddess and God in the World, Judith Plaskow and I reconsider the question of standpoint in theology. We have been engaged in a theological argument about the nature of divinity that we could not resolve through rational argument for a number of years. We have discussed the general differences in our standpoints as reasons for our differences. Both of our theologies are “feminist” and both of us are “white.” As white and feminist, our theologies have certain commonalities, yet they also diverge.

My view that divinity is a loving and personal but not omnipotent is based in Goddess Spirituality, yet it is virtually identical with the views of Christian process theologians such as John Cobb and Monica Coleman and Jewish process theologians like Bradley Shavit Artson. Judith’s view that divinity is an impersonal creative power that is the ground of both good and evil is as likely to be shared with Neo-Pagans as with other Jews. Thus, we found that it would not do simply to further locate Judith’s position as “Jewish feminist” and mine as “Goddess feminist.”

We discovered that the ways in which our theological viewpoints are rooted in our experiences cannot be explained through a simple application of standpoint theory. Thus, we took the radical step of combining autobiography and theology in our new book, Goddess and God in the World, exemplifying a new method we call “embodied theology.” Embodied theology is rooted in personal experiences in our individual bodies. At the same time, we all live in a relational world, shaped by social and historical events and forces that are shared. The relationship between theologies and experiences is embedded in complex webs, with the precise factors that lead to the differences in view being impossible to untangle from the whole. 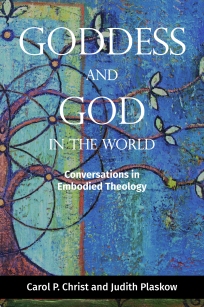 This is discussed further in the newly published Goddess and God in the World: Conversations in Embodied Theology by Carol P. Christ and Judith Plaskow–order now. Ask for a review copy (for blog or print) or exam or desk copy. Please post a review on Amazon.  Share with your friends on social media using the links below.

Listen to Judith and Carol’s first interview on the book on Northern Spirit Radio.