Mother Demdike, Ancestor of My Heart, Part 2 by Mary Sharratt

Continued from Part 1. As I sought to uncover the bones of the cunning woman Mother Demdike’s story, I was drawn into a new world of mystery and magic. It was as though Pendle Hill had opened up like an enchanted mountain to reveal the treasures hidden within. Every stereotype I’d held of historical witches and cunning folk was dashed to pieces. 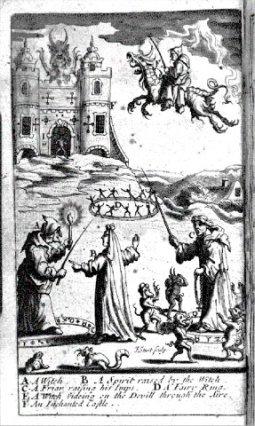 Once in a place called Malkin Tower, there lived a widow, Bess Southerns, called Demdike. Matriarch of her clan, she lived with her widowed daughter and her three grandchildren, the most promising one being Alizon Device, a young woman who showed every promise of becoming a cunning woman as mighty as her grandmother. What fascinated me was not that Bess was arrested and imprisoned but that the authorities only turned on her near the end of her long, productive life. She practiced her craft for decades before anybody dared to interfere with her.

Cunning craft—the art of using charms to heal both humans and livestock—appeared to be Bess’s family trade. Their spells, recorded in the trial documents, were Roman Catholic prayer charms—the kind of folk magic that would have flourished before the Reformation. Bess’s charm to cure a bewitched person, quoted in full in the trial transcripts as damning evidence of diabolical sorcery, is, in fact, a moving and poetic depiction of the passion of Christ, as witnessed by the Virgin Mary:

What is yonder that casts a light so farrandly,
Mine owne deare Sonne that’s naild to the Tree.

Bess herself would have been old enough to remember the Old Church, for the English Reformation didn’t really get under way until the reign of Edward VI, Henry VIII’s short-lived son, who came to the throne when Bess was a teenager. She would have remembered the old ways of lighting candles before statues of the saints, of making offerings at holy wells, of processions around the fields to make them fertile—all practices that English Protestants condemned as pagan and un-Christian. Indeed Bess had the misfortune to live in a time and a place where Catholicism became conflated with witchcraft. Even Reginald Scot, most of the enlightened men of the English Renaissance, thought that the act of transubstantiation, the point in the Catholic mass where it is believed that the host becomes the body and blood of Christ, was an act of sorcery. In 1645, in a pamphlet by Edward Fleetwood entitled A Declaration of a Strange and Wonderfull Monster, describing how a royalist woman in Lancashire supposedly gave birth to a headless baby, Lancashire is described thusly: “No part of England hath so many witches, none fuller of Papists.”

So were Bess and her family at Malkin Tower merely maligned and misunderstood practitioners of Catholic folk magic? The truth seems far more tangled. Bess and her sometimes-friend, sometimes-rival Anne Whittle, aka Chattox, accused each other of using clay figures to curse their enemies. Both women freely confessed, even bragged about their familiar spirits who appeared to them in the guise of beautiful young men—otherworldly lovers. Bess’s spirit was named Tibb, while Chattox’s was called Fancy.

Armed with an Ordinance Survey Map, I attempt to trace the path between Greenhead Manor, once Chattox’s landlord’s home, to the site of Chattox’s cottage in West Close, two miles away. In the 1612 trial, Chattox admitted she was guilty of bewitching to death her landlord’s son because he tried to rape her daughter, Anne Redfearne. For me, Chattox’s story is both horrific and moving. What would it have been like to live in a time when a fierce reputation as a cunning woman was the only power an impoverished woman could wield against the wealthy landed gentry who knew they could get away with rape? Her landlord’s son threatened to turn Chattox’s entire family out of the cottage if young Anne wouldn’t let him “have his way of her.”

Witches and their familiars

No trace remains of Chattox’s hovel but Greenhead Manor still stands. The path is treacherous. By law, any member of the public has right of way on public footpaths. But it appears that Greenhead Manor’s current residents have gone to great lengths to make the footpath impassable. I find shards of broken glass and sharp metal wire blocking my way. Further down, the path is overgrown with thorns. Still further a wasps’ nest, buzzing with dangerous life, has somehow come to rest in the middle of the path. Shivering in the autumn wind, I sense something tainted and menacing, as though the land itself remains poisoned from lingering dark magics committed 400 years ago.

Yet when I soldier on to reach West Close, it feels peaceful. A rain swollen stream winds close by the site of Chattox’s cottage. The waters gush between their banks, rich with the red clay that Chattox and her daughter would have used in their spells of self-preservation. In a nearby field, little girls play, happy and content, oblivious of the fate of any long-dead landlord’s son.

Later I hike past the site of Bess’s Malkin Tower where the sky opens up, blue and huge. No obstructions block the muddy path as I hike through fields where cattle, horses, and sheep all graze together. This land was never very fertile. For time out of mind, grazing has been more important than farming the poor soil. In Bess’s day, the health of a family’s livestock could make the difference between plenty or starvation. Watching the cows and their calves, I remember the story from the trial transcripts of how John Nutter of Bull Hole Farm called upon Bess to heal his sick cow. Though she blessed it, the poor beast died anyway. What happened to a cunning woman when her spells and charms no longer appeared to work? In any case, the farmer declined to utter a word against her or her family in the trial.

The village of Newchurch in Pendle is named after its church, built in 1544. A huge eye, painted on the church tower, stares out like the eye of a cold and pitiless God. Bess and her family would have been obliged to attend Protestant services, whether they liked it or not—or else suffer the churchwarden’s whip and fine. The rich would have sat up front in their pews while poor folk like Bess stood in the back during the hours-long service. The new Puritan regime would have forbidden any recreation on Sundays. No piping or dancing. No football or plays. No card playing or dice throwing. I imagine Bess huddled in the back of the church, its walls white-washed to hide the images of the old saints. I envision her dreaming of the lost pleasures of her youth, when Sundays heralded church ales and people drank and celebrated in the very nave of the church that belonged to them by right. To be continued . . .

This article was originally published in SageWoman Magazine, Issue 79, Autumn 2010.

Like Loading...
‹ Lotus in the Mud: A Metaphor for Humanity on our Darkest Days by Lache S.
My Reaction to the Election Results by Elise M. Edwards ›