Home › General › Do This in Memory of Me By Gina Messina

Do This in Memory of Me By Gina Messina 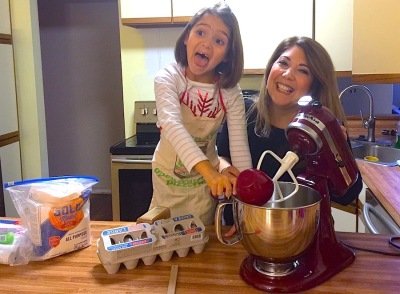 The passing of my mother was very sudden.  At the young age of fifty-six, I thought I had many years to spend with her so I hadn’t worried that any conversation with my mom would also be our last.  Now when I look back, I wish I would have treated every word I spoke to her so delicately, as if those words would be the last she would ever hear from me, but I suppose that is why they say hind sight is 20/20.

Preparing for her funeral I went to her home and gathered some of her things; I wept as I came to the realization that they were all I had left of her.  I found many cherished and priceless possessions that served as reminders of her continued presence in my life.  I discovered her diary that described her absolute joy over being a mother during our childhood years and her poetry that described her belief of motherhood as her most important role.  And then there were her recipes, her cookbooks, perhaps her most important possessions, at least to me, which held her secrets that she used to comfort and love those around her.

As children there were few things my siblings or I found more comforting than a batch of my mother’s peanut butter cookies – the only recipe that received an honorable mention in her eulogy.  She shared her love with us in many ways, but her cooking and baking expressed her motherly affection in such a way that it was experienced distinctly, although I cannot quite describe it.  We participated in her ritualistic recipes and absorbed the aromatic scents as if they were tender embraces from our mother herself.  Creating and nurturing bonds through these recipes that were customarily prepared as loving acts also occurred with her female kin.  Of course those same recipes provided love to all the men in our family too; however I don’t believe they understood the overall selfless and giving action the way women did.  After all, cooking is “women’s work.”

On the day of my mother’s funeral, I slid the peanut butter cookie recipe into her casket.  It seemed the best way to communicate my love for her. And although it may sound cliche, it was in that moment that I realized that my mother lives on. Whenever I prepare one of her recipes, when I ritualistically combine each ingredient, taking in the importance of my actions, it is a remembrance of her and she is present.  Although it sounds trite, my mother lives on, not only through her smirk that I wear on my face, but also through a legacy of charitable selflessness and generous love expressed through her recipes that created an unbreakable bond with so many.  And so, every time I crack open her cookbooks, I hear my mother calling, “Do this in memory of me.”

Ten years after her passing, it brings me great joy to now share these rituals with my daughter and together we are building a distinct bond as I did with my mom.  My hope is that we are creating memories that she will carry in her heart and know that wherever I am, through such a simple act, she will be able to find me.

We each have these bonds in our lives.  They take on different forms; however we connect to one another through rituals we have shared.  It is part of our humanity, a way that we give and receive love.  Although we all endure the pain of losing loved ones, we each have the power to call them to us, to feel their presence, and to carry on their memories through our ritualistic acts of love. By carrying on the legacies of those lost, we keep their spirits alive. It is their energy, their life lessons, their embodied selves that we bring forth as we honor them by living out what we have learned from them and by sharing their love with others.  We are an extension of those we have lost and it is through these rituals that they are resurrected. Consider this the next time you bake a recipe, write a poem, plant a garden, or whatever it may be that created this type of bond for you.  And hear your loved one calling, “Do this in memory of me.”

Gina Messina, Ph.D. is an American feminist scholar, Catholic theologian, and activist. She serves as Associate Professor of Religious Studies at Ursuline College and is Co-founder of FeminismandReligion.com. Messina writes for The Huffington Post, and is author or editor of 5 books including Women Religion Revolution and Jesus in the White House. Messina is a widely sought after speaker and has presented across the US at universities, organizations, conferences and on national platforms including appearances on MSNBC, Tavis Smiley, NPR and the TEDx stage. She has also spoken at the Commission on the Status of Women at the United Nations to discuss matters impacting the lives women around the world. Messina is active in movements to end violence against women and explores opportunities for spiritual healing. Connect with her on Twitter @GMessinaPhD, Facebook, and her website ginamessina.com.

Like Loading...
‹ Brigid from The Goddess Project: Made in Her Image by Colette Numajiri
A Grounded Spirituality, in Community by Xochitl Alvizo ›