Home › Activism › Time’s Up for Bullies by Mary Sharratt

Time’s Up for Bullies by Mary Sharratt 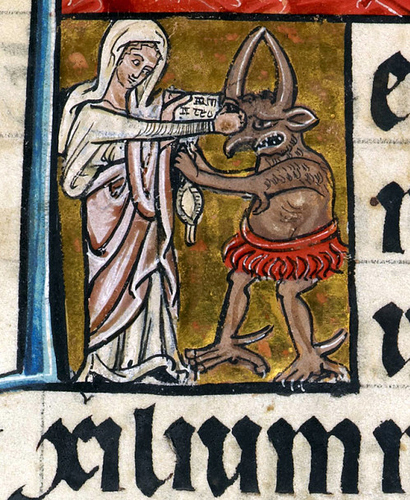 The Virgin Mary says #Time’s Up for Bullies: illumination from a 13th century manuscript

Bullying is rife in our society and it’s not just school kids who have to deal with it. Bullies flourish in the work place, in academia, in spiritual and religious communities, and, of course, on social media. Although female bullies exist, women, from my experience, are more likely to experience the most severe forms of bullying at the hands of entitled males. I would even argue that female-on-female bullying is a direct symptom of patriarchy’s attempts to divide and conquer us.

Just as #Me Too and #Time’s Up blew the whistle on sexual assault and workplace harassment, I believe we are in desperate need of a #Time’s Up for Bullies movement. One thing is certain–our current methods of dealing with bullies seem agonizingly ineffectual, to say the least.

If you google, “how to deal with bullies,” you’ll find advice on assertive body posture, neutral, noninflammatory language, snappy comeback lines, or homilies about having compassion for the bully because he probably had a bad childhood. Or else you are told to “just ignore” the perpetrator. While these tactics might be helpful coping techniques in the short term, none of these address the underlying problem.

Bullies inflict real damage–“ignoring it” is like ignoring family violence. Bullies are all about power and control. Bullying can take the form of aggressive physical abuse, threats, intimidation, verbal and emotional abuse, and sexual harassment or racial abuse. Bullying is a form of coercive abuse that can wear away at you, no matter how thick your skin is, no matter how assertive or strong you try to be. It chips away at self worth and is the ultimate form of gaslighting.

If you are being bullied, you begin to think that you are the problem. Bullying creates a toxic environment in which no one can thrive. Instead people tiptoe on eggshells for fear of provoking another attack of the bully’s wrath or ridicule. Often those in a bullying environment live in cloud of fear or denial until it becomes unbearable and something breaks.

According to Forbes’s Magazine, 35% of the American workforce (53.5 million people) have experienced bullying at their place of employment. 72% of those bullies happened to be their boss. What is it about our corporate culture that allows this to happen? Why are so many onlookers complicit to this abuse? Is it out of fear or cowardice that they might be bullied next, or do they indeed harbor malice for the victim? On many levels, bullying is rewarded in our society. It allows bullies to climb the dominance hierarchy at the expense of their victims.

The Forbes article becomes even more depressing when you read the outcomes of trying to deal with the problem.

The effectiveness of doing nothing about the bullying and letting it blow over: 3.25%

The effectiveness of directly confronting the bully: 3.57%

The effectiveness of seeking support from the bully’s boss: 3.26%

The effectiveness of seeking support from senior management: 3.69%

The effectiveness of asking the union to intervene: 8.84%

The effectiveness of filing a formal complaint with HR: 4.7%

The effectiveness of filing a complaint with a federal agency: 11.9%

The effectiveness of finding an attorney: 11.2%

The effectiveness of filing a lawsuit: 16.4%

The odds here seem clearly stacked in the bullies’ favor. Fighting back can seem an insurmountable challenge. Sometimes the only solution that seems viable is to leave the workplace or other environment (church, school, club) where the bully holds court, thereby allowing the bully to “win” and continue their abuse, this time with another target. Bullies want us to run scared and keep quiet for fear of making a fuss and being blamed for having caused the problem in the first place. It’s a myth that bullying never happens to strong, assertive people.

But what would happen if we collectively banded together to create a new movement? If we decided enough was enough? #Time’sUpforBullies.

Bullies and trolls function in silence and darkness. They absolutely hate being exposed. But what if we named and shamed and outed both the bullies and their enablers? It took a massive tide of law suits and publicity to break the silence surrounding the pervasive child sexual abuse perpetrated by the Catholic clergy, which the Church had hitherto enabled.

In a similar vein, #Me Too and #Time’s Up have succeeded in toppling industry giants like Woody Allen and Garrison Keillor, formerly considered to be untouchable icons. What if all the bullied women in the world got together and declared they’d had enough? May the power of collective female rage move mountains.

Mary Sharratt is on a mission to write overlooked women back into history. Her novel, Ecstasy, about composer and life artist Alma Mahler is new from Houghton Mifflin Harcourt. Visit her website.

Tags: #timesup, Bullying, me too