Home › Feminism and Religion › Making it Mine: An Un-Orthodox Passover by Joyce Zonana

Making it Mine: An Un-Orthodox Passover by Joyce Zonana

This year, I celebrated the Jewish feast of Passover on March 31st–almost three weeks before the holiday’s official start on the evening of April 19th, the 15th of Nissan. It turned out to be my best Passover yet.

Because I’d been accepted for a residency at an artists’ colony beginning on April 17th, I had known since last Fall that I would not be home for the holiday. Given Passover’s importance for me–a Jew who left Egypt in her own lifetime, part of what some have called the “Second Exodus”–I had thought I might postpone the residency and even considered turning it down. But the colony could not change the dates, and, after much deliberation, I decided that my work as a fledgling translator was worth missing my usual gathering of family and friends. I told myself I could mark the arrival of Passover internally.

Yet as the time approached, I realized I would be bereft without at least trying to celebrate the holiday as I normally  did. And so I asked my brother and my cousin, both named Victor, if they could come with their spouses to my home a week before the holiday was set to begin. Neither could make it; we finally settled on March 31st as a date when everyone was available. “Am I reading this right?” a friend asked when I sent her an invitation: “A Passover celebration three weeks in advance?” Yes, I confessed, she was reading it right. “Think of it as a rehearsal dinner,” I told another friend.

Ordinarily, when I prepare for Passover, others around me in Brooklyn (and throughout the world) are also cleaning, shopping, cooking. A collective, communal energy supports each of our efforts. This year, I was entirely on my own to plan, organize, and put it all together. It would be my first real celebration of the holiday since my mother ‘s death in June of 2016.

In 2017, tired and sad, I’d attended an ecumenical seder at the ashram I frequent in Virginia. Not bad. In 2018, still tired and still sad, I’d held a small, half-hearted gathering: just my brother, his partner, and my husband. Terrible. For so many years, my mother had been the focus of our seders, as I sought to make the time meaningful for her . . . This year, I was the only one I had to please.

But this time, too, I allowed myself fully to channel her. For, as I’ve written here before, Jewish holidays were the moments when my mother really shone. She would begin her preparations at least a week in advance, and she would work steadily to clean, shop, and cook. The meals she presented so graciously were elaborate and delicious, served at a table gleaming with polished silver and sparkling crystal. Flowers everywhere on embroidered cloths, relatives and friends happily conversing in French, Arabic, English.

The table set for Seder

This year I began only the day before, but I had decided to make a traditional Egyptian meal, like those we ate at home throughout the year, foods I knew the two Victors would especially enjoy: cousa be gebna (stewed zucchini baked with eggs and cheese), megaddareh (rice and lentils flavored with fried onions), yogurt, Arabic salad (tomatoes with parsley and scallions and cumin), and ardi shawki wa-ful (artichokes braised with fava beans).

I shopped at the bustling Arab market in my neighborhood. Mingling with women in headscarves and niqabs, I bought dates and hazelnuts for the charoset, fresh favas, cheese, mint, and the homemade Middle Eastern pickles we adore: turnips and lemons and cauliflowers, along with black olives and roasted watermelon seeds. I had to refrain from buying everything in the store. At the nearby American supermarket, I found matzoh and maror, the bitter herbs mandated by tradition. Once I’d assembled my ingredients I had less than twenty-four hours to manifest a meal for ten.

Most challenging were the artichokes and favas: with my husband’s help, I shelled three pounds of beans, and then, for the first time in my life, I prepared artichoke hearts as my mother often had: cutting off the leaves, scooping out the choke, trimming the hearts and dropping them in lemony water. It was a revelation: a task I’d never attempted before, considering it too difficult, too time-consuming. And yet my hands easily fell into the rhythm, as if tracing the steps of an ancient, well-known dance; in wonder, I watched the fresh green hearts emerge. 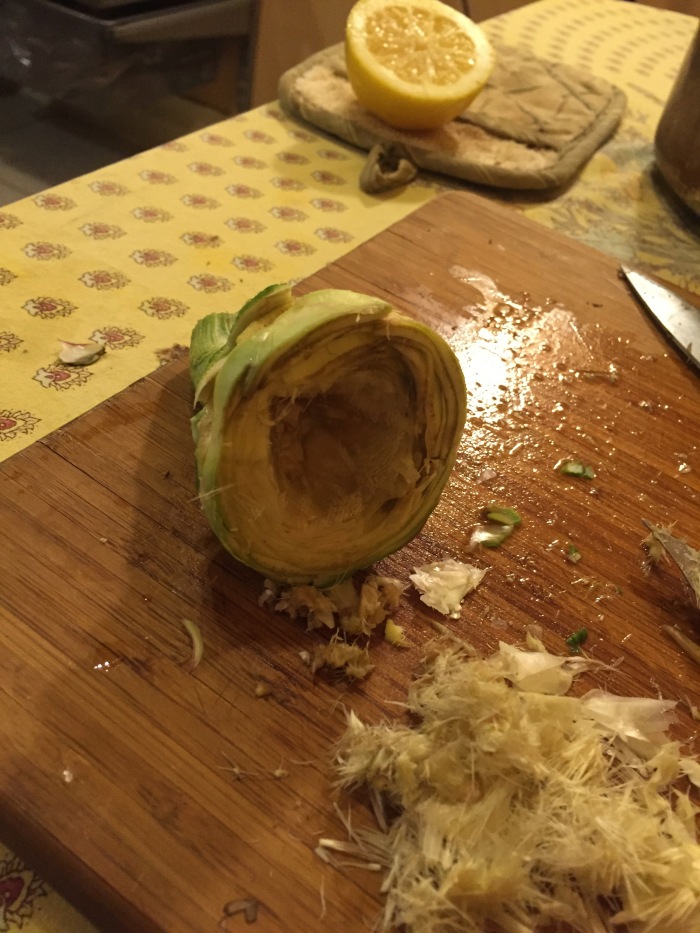 As I chopped, sauteed, simmered, and baked (I even made my mother’s Passover cake, an airy confection of egg whites and finely-chopped walnuts) I felt how time and space collapsed, becoming the sacred time and space of ritual. I experienced myself cooking in all the different times and places of my life: New Orleans, Oklahoma, Philadelphia, New York.  I remembered my mother cooking in our tiny Brooklyn apartment, and I understood, perhaps for the first time, how her gestures linked her to the Egyptian past she had loved and left behind. My own gestures were making my own past present, and as I worked I felt myself  becoming integrated, whole . . . all parts harmonized into one–like the dishes I was preparing. 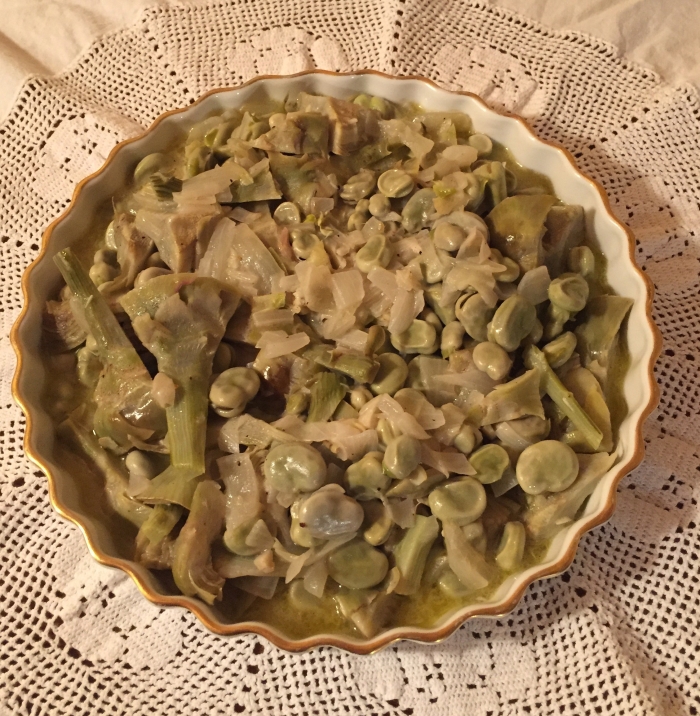 Passover is a holiday of remembrance, of ritual re-enactment: this, we say, is what our ancestors experienced. This is what they felt and knew, what they tasted in their blood. The movement from slavery to liberation, from the soul’s winter to spring. We must never forget, we say, we must always remember, be thankful for our freedom, never take it for granted. “In each generation,” the Haggadah enjoins, “we should feel as if we personally had come out of Egypt.”

Those words have always had special meaning for me: no need for “as if.” Our family had come out of Egypt, even if ours was an Egypt of golden light and ease, not the Mitzraim, the narrow place, of Pharaonic oppression. For us, Passover is a celebration of life in Egypt, not of our exodus from it: and so, this year, the deliberately chosen foods that embody our past, become our present.

There was no Haggadah at our table this year. We did not need it. We remembered, told stories, laughed exuberantly, were grateful. We tasted matzoh, charoset, bitter herbs, the fresh spring greens dipped in salt water, the roasted egg that stands for renewal.

Next year, wherever we are, whenever feels right. Celebrating, connecting, re-membering. Again and again and again. Blessed be.

Joyce Zonana is the author of a memoir, Dream Homes: From Cairo to Katrina, an Exile’s Journey. She recently completed a translation from the French of Egyptian-Jewish writer Tobie Nathan’s Ce pays qui te ressemble [This Land That Is Like You], a novel celebrating Arab-Jewish life in early twentieth-century Cairo, forthcoming from Seagull Books. She served for a time as co-Director of the Ariadne Institute for the Study of Myth and Ritual and has also translated Henri Bosco’s Malicroix, forthcoming from New York Review Books.

Like Loading...
‹ The Room Where We Support Each Other, Part 2 by Carol P. Christ
Marianne Williamson. . . I’m Sacredly Smitten by Lache S. ›