Home › Ancestors › The Room Where We Support Each Other, Part 2 by Carol P. Christ

The Room Where We Support Each Other, Part 2 by Carol P. Christ

Last week, In the Room of Undressing where women strip themselves to the bone, my great-great-grandmothers on my father’s side spoke in me. I had been afraid they would judge me for not being a wife and mother like they were, but they did not.

The story continues with my great-great-grandmothers on my mother’s side.

I was the oldest of eight children. Our father died when I was eleven. At sixteen I was sent to work as a servant in a village far from home. I stayed for six years. After that, I worked for two years on a farm in our village. I was twenty-nine, and wondering if I would be an old maid, when Olof and I married. Our five daughters came quickly. I knew a lot more about work and children he did, so I took charge. When the crops failed all over Sweden for two years running, I said enough was enough. As soon as our last daughter was born, I sold the farm, and we left for America.

Iowa was worse than Sweden. Our little Carin died the first year. Olof gave Ingrid to a wealthy Swedish couple without so much as a word to me. He kept talking about going back to Sweden. One day he took the money I set aside and bought his ticket.

By the time he came back for us, Anna, Sarah, Belle, and I had moved to Kansas City. I was running a boarding house. I told Olof that we had no intention of going back to Sweden with him. When Anna married, instead of moving out, she brought her husband and his children to live with us. Belle became quite the business woman and took over my role as provider. Sarah and her family were always close by.

I worked as hard as any man and Belle did too. “Far better off on our own,” we would often say. We are proud to have another strong woman in our family. I am sorry you didn’t get to meet Belle. You would have liked her.

My village was a few miles from the village of my husband, where I went to live. We were farmers. We had six children in eleven years. My husband mortgaged our farm to send horses to Napoleon’s army in the Franco-Prussian War. I could not believe my ears when he told me. “What if we lose everything?” I said. “We won’t,” he insisted. “We will double our money.”

We lost everything and were forced to move our family into a “poor house” that was barely big enough for all of us to stand or sleep at one time. With no future in Sweden, five of our six children emigrated to America. Your great-grandfather Carl Emil was my oldest and the first to leave. My heart ached.

Men are not as smart as they think they are. My husband ruined our lives with his foolish dreams. He could do it because the power was all his. Thank you for fighting for women.

I had an illegitimate child in Mecklenburg, our sweet Carolina. Anton and I were not allowed to marry because the church said he was too poor to support a family. I stayed with my parents. They didn’t want me to see Anton again. When Carolina was four, Anton said we were leaving for America. My mother would not let us take Carolina.

We settled in Lyons and built the farm from nothing. We lost the first children born in America, two little girls, Minnie and Mary. Those were sad years. But Dora and her brothers, Albert and William, survived. As soon as she turned sixteen, Carolina took her life into her own hands, boarded a ship, and came to America. Our family was finally together.

Life treated us well from then on. Anton and I learned to speak English. Lina married an educated man, a pharmacist. William studied law, married into a good family, and built one of the biggest houses in Alma. Dora married a prosperous farmer in Lyons. Albert married two sisters. He wasn’t lucky, but he worked hard.

Your great-grandmother Dora was interested in women’s rights and a woman’s religion called Christian Science. I never understood why she was so unhappy. She had it a lot easier than I did. Her husband was a good man. But she always wanted more. I was never one to complain. Still, I am happy that women have more freedom than we did back in Germany when I had to hide my head in shame. I do not understand everything you are doing, but I support you.

If I look stern in the photographs, it is because life made me hard. When I was a baby, my parents began to farm in Hartland, New York. The ground was rocky and the winters were cold. I was the oldest, and I helped my mother with the little ones. When I married James, his dream was to start a farm in the wilderness of a place called Michigan.

Before we set off in a covered wagon with a team of short-horned cattle, we had to bury our little daughter in Hartland. I hated to leave her there. The early years in the log cabin were difficult. I bore eight more children. Only five of them made it to adulthood. A part of me died with each child we lost. That is why you do not see me smiling for the photographers.

I remember your grandmother Lena. What a delightful little girl she was. She loved her life on the farm. I am glad that she taught you to love nature. Nature was tamed on the farm by the time she was born. She grew up in a rambling white house with a sprawling porch, never knowing the hardships that had been our lot.

You wonder what I think of you? I heard about those women who were fighting for the vote, and I went to hear them speak. I felt proud. And I am proud of you. Thank goodness you have had an easier life than I did. There was once a smile in my heart, but it got lost somewhere along the way. 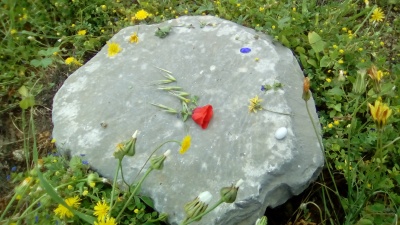 Carol P. Christ is an internationally known feminist writer, activist, and educator living in Lasithi, Crete. Carol’s recent book written with Judith Plaskow, Goddess and God in the World: Conversations in Embodied Theology, is on Amazon. A Serpentine Path: Mysteries of the Goddess is on sale for $9.99 on Amazon. Carol  has been leading Goddess Pilgrimage to Crete for over twenty years: join her in Crete. Carol’s photo by Michael Honneger.

Like Loading...
‹ No Hope, No Problem: Reflections on Pesach, Time and Paradox. by Ivy Helman
Making it Mine: An Un-Orthodox Passover by Joyce Zonana ›