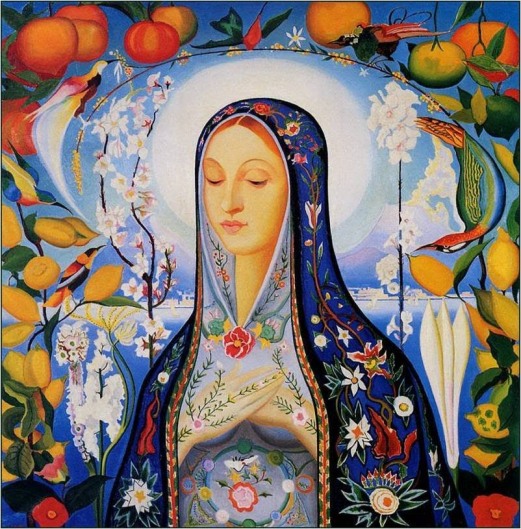 Born in the Rhineland in present day Germany, Hildegard (1098–1179) was a visionary and polymath. She founded two monasteries, went on four preaching tours, and wrote nine books addressing both scientific and religious subjects, an unprecedented accomplishment for a 12th-century woman. Her prophecies earned her the title Sybil of the Rhine.

Over eight centuries after her death, Hildegard was finally canonized in May 2012 and in October 2012 was elevated to Doctor of the Church, a rare and solemn title reserved for the most distinguished theologians.

But most people today know Hildegard best for her soaring ethereal music.

The first composer for whom we have a biography, she composed seventy-seven sacred songs, as well as Ordo Virtutum, a liturgical drama set to music.

Her melodies are completely unlike the plainchant of her era—or anything that has come before or since. Likewise her lyrics are highly original and feel fresh to us even today. She was the only 12th century writer to compose in free verse.

Hildegard and her nuns sang the Divine Office eight times a day. She believed that song was the highest form of prayer—the mystical power of music reunited humankind to the ecstasy and beauty of paradise before the fall, connecting the singer directly with the divine, and joining heaven and earth in celestial harmony.

I’ve spent years researching Hildegard. I’ve visited the sites of her abbeys along the Nahe and Rhine, studied her writings, and written a novel about her, Illuminations: A Novel of Hildegard von Bingen, published in 2012. I’ve had the privilege of discussing Hildegard’s life and work with scholars, musicians, and people of faith from around the world. But not until last month did I have the opportunity to experience firsthand what it would be like to sing Hildegard’s wondrous music.

In August I took part in a retreat entitled “Connecting Heaven and Earth: The Chant of Hildegard” at Hawkwood College in Stroud, southern England, led by renowned soprano Dame Emma Kirkby and by author, spirituality teacher, and musician Caitlin Matthews. I’ve been reading Caitlin’s sublime books from the moment she started publishing in the 1980s. Caitlin’s Sophia: Goddess of Wisdom, Bride of God is a spiritual classic I highly recommend. I also own and adore Emma’s iconic 1985 album, Feather on the Breath of God, which first introduced Hildegard’s music to a wide mainstream audience.

This course was open to singers of all abilities. I would describe myself as an enthusiastic amateur, better suited for folk songs than Hildegard’s soaring octave leaps, but as a lover of Hildegard, how could I not at least give it a try? I’ll confess I was somewhat intimidated to learn that many of the participants were professional or semi-professional singers who were quite adept at sight-reading and that some of the scores we worked with were not in modern notation but in the medieval neume pattern. I found our singing classes quite daunting, even grueling, for we were experiencing a heat wave and our classrooms were all south facing with huge glass windows and radiators we could not shut off!

Hildegard’s music is challenging, especially for amateurs like me. It requires a huge range of voice, from ascendant scales that even the experienced sopranos sometimes struggled with, to deeper, profounder notes. But as the weekend went on, I began to slowly grow in confidence, following the stronger voices around me, and enjoying the sheer beauty of the music.

Caitlin helped balance the retreat by sending us on outdoor walking meditations through the beautiful gardens and woodlands where we could meditate on Hildegard’s vision of Viriditas–the sacred as manifest in the green, growing world.

On our last evening, we performed a recital with an audience of one, a friend of one of the participants. Some of the more accomplished singers sang solos while the rest of us joined in the chorus and in other songs. Listening to the soloists, I nearly wept, it was so beautiful and transformative. Listening to Hildegard’s music, particularly when performed live, moves the spirit within. These sacred songs are literally uplifting, just like the dramatic leaps in scales. After our recital, our single audience member told us that she felt the music lifting her heart energy toward heaven. 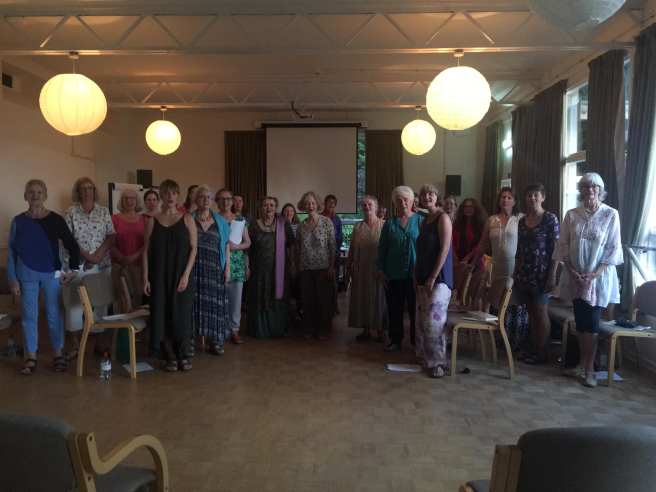 Our evening recital at Hawkwood. Caitlin and Emma are front and center. I am the short one with the long hair in the back, on the right.

While writing Illuminations: A Novel of Hildegard von Bingen, I listened nonstop to CDs of Hildegard’s music, creating a wall of sacred sound that helped inspire and empower my writing. But singing her music live as an amateur was a completely different and possibly more authentic experience than listening to polished and digitally mastered CDs. Hildegard composed her music to be sung by her sister nuns, not all of whom would be accomplished vocalists. She might have had sisters who were tone deaf or had a very limited vocal range. In sacred song what matters most is the spiritual intention behind it, rather than talent or technique or polish. Each song is a prayer offered to the divine. Sacred song is all about the mystery of devotion rather than the mastery of notes or neumes. Singing in a group of like-minded women, even with such a broad range of ability as we had, we reached a sublime place, our voices joining, so that we could hear the Voice behind our individual voices.

“There is the music of heaven in all things,” Hildegard wrote. “But we have forgotten to hear it until we sing.”

Mary Sharratt’s Illuminations: A Novel of Hildegard von Bingen is published by Mariner. She has also written about another female composer, Alma Schindler Mahler, in her new novel Ecstasy. Visit Mary’s website: http://www.marysharratt.com

Like Loading...
‹ THREE POEMS OF LIFE by Janet Maika’i Rudolph
Giving Up What You Do Not Have by Esther Nelson ›