Home › Spirituality › Me and Brother Francesco by Rachel Hollander

Me and Brother Francesco by Rachel Hollander 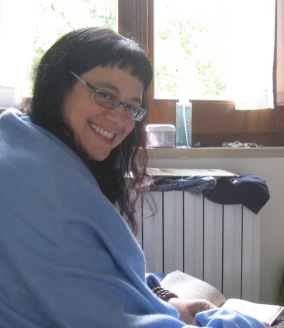 At the age of nine, I was taken to see the film Brother Sun, Sister Moon. It is a gorgeous film about the early life – and spiritual revelation – of Saint Francis of Assisi, or as I like to call him: Brother Francesco. As the final credits rolled, that first time seeing it, I couldn’t stop the tears from flowing. My Mom asked me what was wrong, and all I could say was, “I want to go be with him, I belong with him.” Her response was predictable: 1. I was Jewish. 2. He was dead. 3. I was a girl!

From that moment, though, I knew that in some past life I must have walked with Brother Francesco. I felt such a powerful kinship with him, with his connection to Spirit, with his rejection of “traditional religion” (and all its limitations and rules and exclusionary practices), and with his sense of Oneness with all beings, human and animal. He was always much more to me than “the patron saint of animals.” He heard a clear message from God/Spirit and listened to it, without question. And this listening brought him peace and purpose.

Throughout my life, Brother Francesco has been a guiding influence for me. He is a member of what I call “My Soul Team,” which also includes Joan of Arc, Don Quixote, Mother Teresa, Vincent van Gogh, Brother Lawrence, Sister Teresa of Avila . . . His prayers, his way of being, his transformation and life have taught me so much about how I want to walk in my life.

I especially feel his presence with me when the darkness moves in. It helps me to know that he had moments in the darkness as well, moments when he felt defeated and lost. I think about him climbing Mount Subasio, sitting in his cave, crying, singing, and listening to the rain.

Wanting to sit in that cave and listen to what he heard was one of the motivations for my trip of a lifetime: a sojourn to Assisi in 2009. Finally, 36 years after that movie moment, I was going to walk in his steps and breathe his air.

Yes, Assisi is something of a tourist town (the number of buses arriving each day was impressive!), and it was filled with t-shirts and statuettes and images and icons of this man. And yet I always remembered this: there are Holy places, and their Holiness meets us at the door. We bring some of their Holiness in with us. So, I found a way to make all those people — all that noise and consumerism — vanish from my experience as I brought my Holy to The Holy, as I focused only on my vision and my mission. For me, this was a pilgrimage. Nothing else mattered.

Three moments – among the many Sacred Moments – stand out:

The day I walked down to San Damiano – September 17 – was not only my Dad’s 34th yartzheit , it was also the date when people commemorate Brother Francesco receiving the stigmata. I could feel my Dad walking with me down the path. I felt him every time I heard the bells. San Damiano is still an active spiritual home, the grounds close for sacred prayer time. I found a low stone wall nearby to sit on, have a small picnic, journal, and look out over the valley, seeing “new town” Assisi and the very large church inside which the Brothers’ small home was preserved: St. Mary of the Angels.

I felt total happiness. It was a liberating, gentle, sweet sensation of . . . home. There was a beautiful statue of Brother Francesco across from me: he was in a cross-legged sitting position, looking out at the same valley I was looking at, smiling serenely. I chatted with him as I snacked, sang, wrote, and breathed deeply the air of Assisi.

And then, the sky opened up, and it began to pour. Clouds moved over the landscape, dumping buckets of rain before they just as quickly moved on. I had brought a light raincoat and a small umbrella, both of which failed me quickly. I started to laugh, and I could feel both my Dad and Brother Francesco laughing with me! We sang and laughed in the rain as I became completely drenched!

When I went to see the Basilica of Saint Francis, the large, ornate church, that is everything Brother Francesco didn’t want, I still found an opportunity to experience the Sacred. His ashes are there, along with some of my favourite of his Brothers (Bernardo, Jacoba – the only female “brother” – and Leo).

When I arrived at the Basilica, I made eye contact with a Brother, in the familiar brown sack-cloth tied with a rope around the waist. He smiled, I smiled, and I approached him, using my Italian translation book to communicate. He said, in English, “It’s alright, I’m from Wisconsin!”

He asked what brought me to Assisi and, as often happened on that sabbatical, I started to cry as I explained what called me there. He smiled and said, “Oh, you are a pilgrim.” He immediately knew me in a way I could never explain. He knew I had been called there. In a most gentle voice, he asked, “May I pray over and anoint you before you enter the Basilica?” Through tears, I nodded that he could. He placed his hands on my head and spoke kind and gentle words that connected to my soul. It transformed this enormous and un-Francesco-like building into a most intimate encounter with the legacy that he left behind him.

A third sacred encounter happened at Eremo delle Carceri, a mountain-top monastery  that the Brothers used to go to for quiet reflection time. After walking what seemed to be an endless road of switchbacks, I reached the top.

Walking through the lush green woods of Eremo delle Carceri, I experienced again that feeling of being home, of feeling whole, of remembering my true self – spiritually, emotionally, humanly. I felt like I was the person I always saw myself as: connected to something larger than myself, a deeply loved child of God (God as Oneness, Wholeness, Spirit, Universal Love).

When I reached the cave where Brother Francesco would stay, again tears of gratitude poured from my eyes. This is the actual place where he faced his doubts, where he cried, where he re-filled his well, where he would sing with the rain and talk with the birds, where he and God met in the most intimate of ways.

Before entering the cave, I sat in an adjoining room to prepare myself. A woman walked past me to enter the cave. We nodded and smiled at each other, recognizing a fellow pilgrim.

The woman came back out of the cave and stopped in front of me. She was radiant. She bent down to me, put her hand on my arm, and whispered to me, “Ecouter” (French for “Listen”). She smiled at me, truly knowing that we both deeply understood what she meant. And then, she left. And she was gone. I didn’t see where she went, and there was just a single path out from the cave.

After a deep breath, I entered the cave.

As I am always drawn to do, I placed my hands on the stone wall of the cave and was overwhelmed with emotion (and “good bumps”) as I heard music fill the space, from inside my head, in my memory. My own voice came through it, singing a song I wrote for my Assisi journey. And then, a clear vision of Brother Francesco, smiling, standing with me, sharing this moment.

Ecouter. I will, forever, remember to Listen.

Rev. Rachel Hollander is an Inter-Faith Minister and founder of the SpiritStone Spirit Center. She is a spiritual counselor and teacher and is currently completing her master’s degree in theology at Ursuline College. SpiritStone has become a “spiritual center in the world.” With or without walls, Rev. Rachel carries Brother Francesco’s Vision of bringing people and Spirit together across boundaries. All are invited. All are Welcomed. This life is a journey. And we are all just walking each other home.

Like Loading...
‹ Some Lessons We Learn the Hard Way by Gina Messina
Crane – Guide to Royalty, Longevity and Balance by Judith Shaw ›