Home › Activism › Forgive Me My Ancestor(s) by Elizabeth Cunningham

Forgive Me My Ancestor(s) by Elizabeth Cunningham

When I was a child in the 1950s we often played cowboys and Indians. There is a photograph of my brother and me in no doubt inauthentic costume complete with feathered headdress. In kindergarten I named myself Morning Star. (I just googled and see that I must have gotten the name from the 50s television series Brave Eagle, the first with an indigenous main character. Morning Star is the female lead.)

When I was a teenager, my aunt came across a privately printed book The Gentleman on the Plains about second sons of English aristocracy hunting buffalo in western Iowa. My great grandfather accompanied them as their clergyman. I wish I could find that book now to see how this enterprise was presented. In my adolescent mind these “gentlemen” looked like the local foxhunters in full regalia. On opening morning of foxhunt season an Episcopal clergyman (like my father) was on hand in ecclesiastical dress to bless the hunt and then invited to a boozy breakfast.

I first saw buffalo, who are in fact bison, tatanka in Lakota, driving cross-country with my children. As we entered Yellow Stone park, my daughter, reading a tourist pamphlet, asked, “what does g-o-r-e-d spell?” It was a warning about what bison could do. When we glimpsed these magnificent animals, it hit me in my gut: the “gentleman on the plains” came here to kill these creatures. When did I come to understand that it was not for sport? It was US government policy carried out by the army (and by hired hunters) to exterminate not only the primary food source of the Plains Indians but their way of life, their culture. My great grandfather had in fact blessed systematic, government-ordered genocide.

In Fall 2016, I joined thousands of others at the Standing Rock prayer camp founded by indigenous youth in opposition to the Dakota Access Pipeline. The route of the pipeline (since constructed by Trump’s executive order and still in litigation) threatens the water supply of the tribe and also violates Article II of the Fort Laramie Treaty, which guarantees the “undisturbed use and occupation” of reservation lands. My brief participation in the movement at Standing Rock was the beginning of a long overdue education. 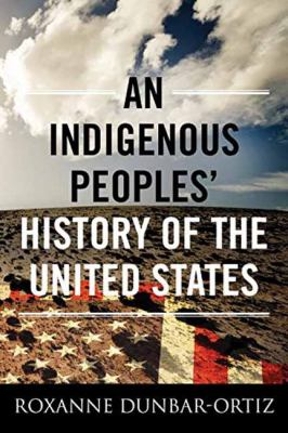 For Christmas my son gave me An Indigenous Peoples’ History of the United States by Roxanne Dunbar-Ortiz. From this award-winning book I have learned (among many things I did not know) that the English practice of collecting of scalps for bounty dates back to their early 17th century invasion of Ireland and was continued in North America. Scorched earth policy (the slaughtering of elders, women and children, and destruction of crops) was commonplace from colonial times through westward expansion. President Lincoln, who campaigned on opening lands west of the Mississippi for settlement, ordered the largest mass hanging in United States history following an indigenous uprising in Minnesota. Walt Whitman celebrated the triumph of white Anglo civilization as inevitable and desirable.

Children of my generation were taught that before the coming of Europeans, North America was a wilderness inhabited by small wandering bands of Indians. We now know there was a large population made up of diverse nations who had a sophisticated trading system. Many nations farmed and had techniques for land management to maintain the health of forest and prairie. Instead of domesticating animals, they created and sustained habitats that attracted abundant game. If there were territorial disputes that could not be resolved through diplomacy, warriors, sometimes in single combat, fought one another. Indigenous peoples did not practice private ownership of land.

I keep pondering those second (and subsequent) sons, who spread out over the globe, killing, colonizing, enslaving, and wreaking ecological havoc wherever they went. England had primogeniture until 1925. (The plots of both Pride and Prejudice and Downton Abbey turn on a distant male relative inheriting instead of the daughters.) A century of British enclosure acts (1700-1801) privatized formerly common lands, displacing much of the rural population. There were enough power and land hungry people to swell an empire. The United States carried on with its own imperial ambitions expanding beyond the continent to Hawaii, Samoa, the Philippines, the Marianas, Puerto Rico and more.

A fundamental difference in the understanding of human relationship to land has been at issue since the first Europeans set foot in the Americas. Indigenous nations in this country and all over the world remain on the front lines defending land and water against depredations of government-backed, privately- owned corporations intent on building pipelines, drilling, mining, clear-cutting forests. The idea that (some) human beings have a right to own and exploit land and water—as well as, historically, other peoples—and that this right is even divinely sanctioned has brought us and the whole planet to a crisis point. Will it be a turning point or a point of no return?

I don’t know if my great-grandfather repented his role in the hunting of bison to near extinction. One meaning of repent is to turn around. He did go back east, perhaps at the behest of his fiancé who left England in pursuit of him, traveling alone and packing a pistol. They married and settled in Connecticut (once home to the Narragansett, Mohegans, Wampanoag, Nipmuck, Pocumtuck, Abenaki and Pequot among other nations) where they raised four sons, all of whom became clergymen, as did my father.

My father’s mother was an orphan adopted by one of the first women to become an M.D.. From genetic markers, it looks as though my grandmother’s birth family came from southwestern Ireland, one of the regions hardest hit by the potato famine. In 1847, members of the Choctaw Nation, recently forced from their homeland east of the Mississippi, collected money to send to Ireland’s poor who were suffering starvation.

At that time, Ireland was still under British rule.

Elizabeth Cunningham is best known as the author of The Maeve Chronicles, a series of award winning novels featuring a feisty Celtic Magdalen. Her novels The Wild Mother and The Return of the Goddess have both been released in 25th anniversary editions. She is also the author of Murder at the Rummage Sale. The sequel, All the Perils of this Night, will be published in 2020. Tell Me the Story Again, her fourth collection of poems, is now in print. An interfaith minister, Cunningham is in private practice as a counselor. She is also a fellow emeritus of Black Earth Institute.

Like Loading...
‹ Who Owns the Sacred? A Personal Search beyond (European) Indigenous Knowledge by Eline Kieft
Do We Have to Hate Our Mothers? No, We Do Not! by Carol P. Christ ›