The Serpent and The Seed by Janet Maika’i Rudolph 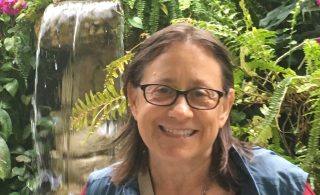 I was so inspired by Judith Shaw’s blog post, “The Serpent and the Goddess” (Feb 26th) that I began to dust off my old notes on serpent imagery. I was reminded a concept that kept jumping out at me. In discussing the Kabbalah, Rabbi David A Cooper, writes that mystics describe the universe as the “the skin of the serpent.”[1] What a beautiful yet puzzling concept! I wanted to dig deeper.

To deepen our understanding of the mysteries of the serpent, we can note that it is also connected with symbolisms of fire and male energy. The fiery serpent was known as the mate of the goddess who rose into the sky to create thunderstorms.[3] As a component of its thunderstorm symbolisms, the serpentine shape of the lightning bolt was regarded as a serpent slithering amongst the stars.

Monica Sjöö and Barbara Mor discuss how the serpent’s role in the skies is mirrored in its role on Earth (and vice versa), “Gliding as it does in and out of holes and caverns in the earth, the serpent also symbolized the underground abode of the dead who wait for rebirth. Its undulations symbolized the serpentine earth currents of underground waters. The serpent path on earth was seen as the terrestrial energy flow; the serpent path in the sky was the winding spray of stars in the galactic spiral-arm, or Milky Way.”[4]

The Serpent Goddess Tiamat was the Mesopotamian Great Goddess of the salty seas and their depths. She shows up in the Bible using a different name – Tehom. Tehom in the Bible is used as a noun and usually translated as “abyss” or the “deep.” In this telling, the undifferentiated maelstrom of the salty oceanic depths was the original Goddess cauldron and the origin of all Earthly creation. It is the source where the first precious seeds of life emerged. But in order to spread their treasure, these seeds needed to travel out of the abyss to find land. Tiamat/Tehom, the Serpent Goddess, protected the seeds (perhaps even in Her own body) as they travelled through stormy seas and perilous waters to reach the land they needed to grow and propagate. I believe this is why we always find serpents at the base of the sacred tree. The serpent first shepherded the seeds to soil and then continued to protect them as they grew.

Then another step was needed for the seeds to carry life from their enclosed garden out to our cherished planet Earth. How to make that happen? Once again, the serpent was instrumental. The serpent urged Adam and Eve to eat the seed-laden fruit so those seeds could be sheltered and protected within their human bodies for the next stage of their journey. By eating the fruit, Adam and Eve became the vessels to carry the seeds out of the garden. Here is part of the Biblical story:

Now the serpent was more subtil than any beast of the field which the LORD God had made
Genesis 3:1

The word “subtil” is also often translated as cunning, sly, or shrewd. In Hebrew it is aRuM.[5] After Adam and Eve eat the fruit:

And the eyes of them both were opened, and they knew that they were naked.
Genesis 3:7

The word used for “naked” is aRuMiM,[6] the plural of aRuM.[7] In other words, when they awakened, they knew they had serpent-like qualities. They carried the seeds within their bodies, just as the Great Serpent Goddess, Tiamat/Tehom had done before them. Adam and Eve were the original biblical agents of dispersal. Thor Hansen writes, “With that one tempting fruit, it [the tree with its abundance of seeds] went from a garden-bound existence to the promise of mass dispersal with humanity across the face of the earth.”[8] Both the tree and the serpent fulfilled their mission – sending seeds that carry the raw material for life out into the world.

Understanding the serpent as an interpenetration of opposites and as the protector and carrier of seeds, is a wonderful key to unlock this one meaning of the universe as the “the skin of the serpent.”

Rabbi David A. Cooper writes about this symbology in relation to the mystical experience; “The serpent represents far more in mystical Judaism than is commonly known, and a deeper understanding of these teachings changes entirely our appreciation of the story of creation. Without the serpent, without the energizing of creation, we would never have the opportunity to follow a path returning us to our Divine Source.”[9]

Janet Rudolph has written three books on the subject of ancient Biblical Teachings.  One Gods: The Mystic Pagan’s Guide to the Bible, When Eve Was a Goddess: A Shamanic Look at the Bible, and the just recently released book, When Moses Was a Shaman. For more information visit her website at /www.mysticpagan.com/