Seeding In by Sara Wright 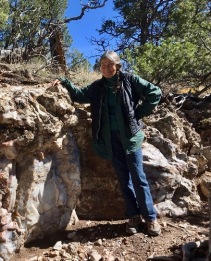 I watered the soil thoroughly because it was so dry. Like my foremothers and the women who came before them I intended to plant seeds, and May has been a month of bizarre weather extremes. The last waxing moon frost occurred this week with temperatures in the mid 20’s. Finally, it was time…

When I awakened during the night a light drizzle sweetened the air as a solitary gray tree frog trilled from the brook. At dawn I was disappointed that rain had barely wet the leaves and yet the sky was soft with dark gray clouds, and it was delightfully cool, a perfect day for planting.

I felt excitement rising as I gathered my chosen seeds and began raking smooth the damp sweet earth, marveling of the fact that each seed contains the miracle of its own becoming. I was imagining the riot of color that would be visible by early August as I poked each seed into its home, tamped it down, and afterwards, watered again. Nasturtiums and Scarlet Runner beans would provide the back-drop for the perennial flowers in the lower garden all of which had escaped the frost. I was well pleased. Because of the light drizzle the seeds would not dry out today, I thought, with some satisfaction. 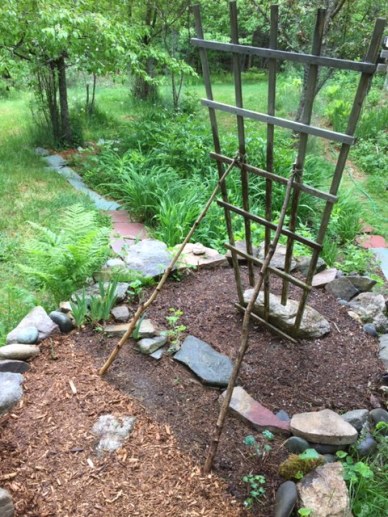 Finishing with the rock garden I moved up the hill to my herb patch. I planted four basil plants, the dill seedlings were nestled next to the lettuce, with parsley in between; happily the lemon thyme was recovering from its winter ordeal. Finally I seeded more basil directly into the soil and poked more trailing nasturtiums around the lettuce because the latter would be gone before the nasturtiums were big enough to shade the plants.

This simple little herb patch gave me as much pleasure as having a big vegetable garden once did. It was the relational act of co creating with the earth that mattered.

Afterwards I walked to the pond in the still gray air. I love humidity when it’s cool because the moist air holds the scents of so many trees plants, bushes and flowers. The combined effect is intoxicating. Especially now with the lilacs.

When the rain began I was back in the house. Instantly my eyes witnessed electric green emanating from the trees – all plants were breathing, saturating themselves with moisture. The evergreens stretched their fingers out, and the deciduous trees turned their leaves upward opening them to the sky. The grosbeaks, red wings, and cardinals sang love songs. Everyone loves the Cloud People.

Seeding in officially marks the end of heavy garden work for me. For two months I have been digging and moving plants from the big cottage garden into a smaller one that I can see from the screened and glassed in porch, our summer living room.

Reflecting over the past few years I remembered becoming disenchanted with gardening – the work was becoming too hard – so much so that I thought I was ready to let go. I was wrong. When the grass began to crowd out the delicate spring flowers and other old fashioned perennials so dear to me I realized I was missing my old friends.

At that point I left for the NM desert where I tried to garden in a hostile environment on land that did not belong to me. After attempting to create an oasis in impossible heat and wind I was forced to give up gardening for a second time, this time out of necessity. In that process I had developed a new perspective on gardening in Maine. It might be hard work but the rewards were worth it. I was ready to try again.

When I returned home this spring I knew that necessary construction would ruin what was left of the old fashioned overgrown cottage garden. Trusting that this work will happen ‘sometime’ motivated me to move plant after plant – choosing carefully what to keep and what to let go. The result is that I have created a lovely cottage garden that contains my most beloved perennial flowers. Hopefully I can care for these, at least for a few more years. It’s been quite a process, and I have learned the hard way that gardening is as necessary to me as breathing.

June’s full moon is upon us. Because so many wildflowers are sprouting fruiting bodies besides strawberries I have re named this solstice moon the Berry Moon… There is an old purple Berry Woman that lives in this forested wood inside an Elderberry bush I recently planted who can be coaxed out of hiding if the need is great. I hope she will help me break out of the  paralyzed state I find myself in. I need help believing that I can find the builder, the help I need…

Once, a few years ago she left me a seed…