Home › Academics › “Fertility” and the Regeneration of Life by Carol P. Christ

“Fertility” and the Regeneration of Life by Carol P. Christ

Prehistoric and indigenous religious traditions are often disparagingly mischaracterized as primitive fertility religions, concerned not with higher morality, but rather with the processes of reproduction of humans, animals, and plants. When these religions feature a Great Mother Goddess, it may be assumed that these religions are primarily focused on birthing human babies. Nothing could be farther from the truth.

Indeed, archaeologist Marija Gimbutas discovered that in the symbol systems of Old Europe, the Goddess is only rarely imaged as pregnant or giving birth. Nor is She portrayed solely in human form. Rather, She is portrayed with a bird head, wings, and a plethora of other animal and plant features. If She is a Great Mother Goddess, She is revered as the Source of Life, not simply as a mother of human babies. Gimbutas states that in Old Europe the Goddess was worshiped in as a symbol of the powers of birth, death, and regeneration in all of life. Gimbutas said these societies were matrilineal and probably matrilocal. Recent research into matrilineal and matrilocal egalitarian matriarchies provides insight into the values of prehistoric societies. The Minangkabau of West Sumatra, Indonesia are matrilineal and matrilocal, with family ties being traced through the mother line and land being held communally and in perpetuity by the maternal clan. Though the Minangkabau trace their ancestry through their mothers and grandmothers, it is important to note that, as Peggy Reeves Sanday discusses in Women at the Center, it is not birth or the ability to give birth that is celebrated as the highest value, but rather the nurturing of the weak and the vulnerable.

The Minangkabau understand that giving birth to babies is not sufficient to ensure the continuation of the clan. Babies must be taken care of by others or they will die. Thus, it is the care and concern of mothers for their children, characterized as love and generosity, that are understood to be the highest values. In the Minangkabau culture, both males and female are taught to emulate the values of mothers. There are no gender binaries and no gender specific personality types: to nurture life with love and generosity is the highest value for both sexes.

Nurturing life is not limited to the human sphere. The same love and generosity that is given to human babies must also be directed to weak and vulnerable domesticated plants and animals if the community as a whole is to survive and thrive. In the Minangkabau society, the maternal clan owns the land, and women are the primary nurturers of weak and vulnerable plants and animals. Yet men and boys are expected to embody the values of mothers: nurture, love, and generosity in all the roles they undertake, including caring for children. From this it is clear that the Minangkabau should not be characterized as following a primitive fertility religion, concerned only with simple the reproduction of life. Instead, it should be characterized as promoting a higher value: the nurturing of the weak and the vulnerable through love and generosity in order that life as a whole may continue.

In patriarchal cultures founded in relation to war and private property, nurturing the weak and the vulnerable is not considered to be the highest value. Nurturing the weak and the vulnerable is relegated to the realm of the female which is considered lesser than the male. In the male realm, the value of sacrifice, particularly self-sacrifice on the battlefield or through ascetic discipline is considered a higher value than nurturing of life. Immortality is promised as a reward for self-sacrifice. Holidays celebrating battles and the heroes of war and those celebrating saints are considered more important than mothers’ days.

It is high time to rethink the hierarchy of values we have inherited from patriarchal cultures, especially now when the continuation of life is threatened by war and global climate change. Perhaps we can recognize that nurturing the weak and the vulnerable really is the highest value—a value that can and should be practiced by all people, not just by women and girls. Nurturing the weak and the vulnerable is necessary if birth is to lead to life and death is to be followed by regeneration. To speak of fertility Goddesses is a mistake. The Goddess who is celebrated as the Source of Life has the power to give birth and to ensure that life will continue for the clan and for nature as a whole despite the deaths of individuals. The mother’s power to nurture life through love and generosity is understood to be a reflection of the power of the Source of Life.

After having been promised immortality or reincarnation by patriarchal religions, many of us are returning to religions that celebrate the powers of birth, death, and regeneration: the continuation of life, not for the individual, but for the generations that will follow. Blessed be! 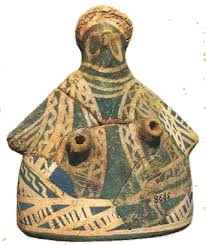 Like Loading...
‹ Write on Lilith! (Write on Eve!) by Ivy Helman
Telepathy, Women, and Birds by Sara Wright ›