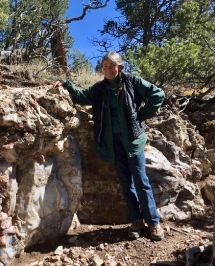 The last gift I received from my very distant parents was a print of a Native American Medicine Wheel by Ojibway artist Joe Geshick. I received this present on my birthday in 1993.

When I opened the cardboard tube I was astonished by the image. A Medicine Wheel? As far as I knew neither of my parents had any idea that I had picked up the thread of my Native heritage and was studying Indigenous mythology. What could have motivated them to send me such an image? I was stunned by the seemingly bizarre synchronicity. 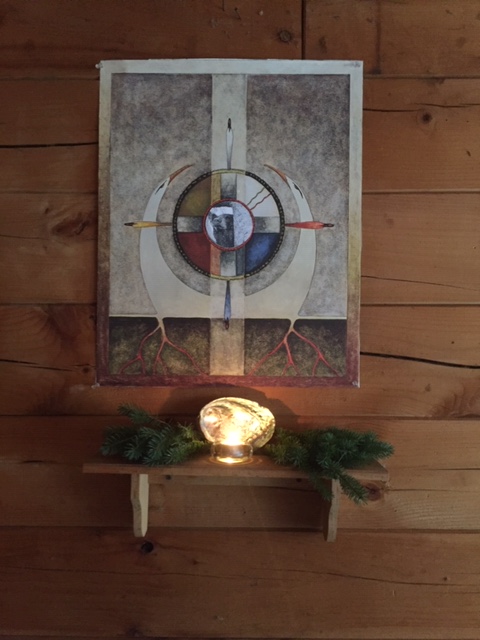 At the time I was also giving an Indian program in the local elementary school called “The Circle Way,” educating children and myself about the mysteries of the medicine wheel.

There was also a Maine Abenaki Indian woman healer named Mollyockett who lived in the area and who seemed to be guiding me in this process. Before walking to school I often went to her gravesite to ask for help. One day I was shocked to discover a Great Blue heron sitting on her gravestone. Some days I could feel a presence when I knelt there in the tall grass.

Although, thanks to interlibrary loan, I was also learning about my own Passamquoddy/Malisset heritage I felt like I knew almost nothing about Northern tribes in general; most had been decimated by disease brought to them by the colonists that destroyed Native core values and the way of life for most of these Indigenous peoples. Some pockets of Native beliefs/stories survived in Canada because they had less contact with white people.

I hung up the medicine wheel immediately and began to use it as an image to help me prepare for my classes. The wheel reflected equality on a level that was familiar to me; we were all connected – trees, people, rivers, flowers – I had always felt this idea to be truth, but suddenly I began to speak about what I knew with a voice I didn’t know I had.

When my father died suddenly about six weeks later the medicine wheel, called “The Circle of Life” became the last gift I ever received from both my parents; it developed a ‘charge’ that resulted in me hanging the wheel in every space I ever inhabited. It is still with me.

And yet, I never researched the artist until I was finishing a thesis on my study of Black Bears (2013) when I decided that this image would become the cover of my manuscript. I learned then that Joe was born in 1943, grew up on a reservation in Northern Minnesota, spent two years in jail for minor infractions and began to paint there. After his release he studied at the Art Student’s league in NY and then taught art in Ontario. On the La Croix Reservation in Ontario he learned something about the fragmented history of his clan, and was introduced to traditional ceremony. In 1977 he began studying with a Lakota Sioux Medicine Elder in Nevada while participating for five years in the annual sacrificial Sundance Ceremony.

As a result, Joe became rooted in traditional ceremony and his paintings reflected this dramatic spiritual shift. “The Circle Of life” embodied this change drawing attention to the four sacred directions, the four seasons, the sacred colors, the four races. All were equal; all required respect. Joe often said that he wanted people to relate to his work through personal experience.

I recognized after doing preliminary research on the artist, that like him, I too had been totally separated from my Native roots and was finding my way back through images, my experiences with animals/plants,  creating/celebrating my own ceremony, and by studying Native mythologies. A slow, serpentine, circular lifetime process. But Joe became a model for me, validating that the way that had been chosen for me/chosen by me was an authentic one.

I felt a deep kinship with this particular wheel with one exception. In the center Joe had placed a thunderbird and after learning about the Ojibwa I didn’t understand why the bear wasn’t in the center of the wheel because the bear was the most venerated healer for his people.