For many years, I’ve had a Miriam’s Cup on my Passover seder table, next to the Cup of Elijah. Our cup of Elijah is a kiddush cup belonging to my great-grandfather Joseph Frankel and inscribed with his name. Our cup of Miriam was created by a ceramic artist and bears the word “Miriam” at its base. The Cup of Elijah, filled with wine, is an old tradition—a cup on the seder table for the prophet Elijah, who according to legend visits every Passover seder. The cup of Miriam, filled with water, is a custom only a few decades old, honoring the prophetess Miriam, who watched over the infant Moses, danced in celebration at the crossing of the Sea, and who according to a famous ancient tale had a well of water that followed her through the wilderness.

According to scholar Annette Boeckler, the custom of the Cup of Miriam began at a Shabbat table in Boston in 1989, made its way to the post-Sabbath Havdalah ceremony, and eventually found its way to the seder table. The custom was intended to honor the prophetess Miriam as well as the contributions of women to the Exodus and to Jewish life. Many of the heroes early in the book of Exodus are women, yet their stories are not part of the seder. The Miriam’s Cup at the seder is a way to give the participants an opportunity to include those stories.

I proudly bought my own Miriam’s Cup in my early twenties, and had one at the very first seder I conducted myself.  I was in good feminist company. Years ago, I worked at Ma’yan: The Jewish Women’s Project at the JCC in Manhattan. Around the time I began to work there, Ma’yan put on an exhibit of Miriam’s Cups made by artists: many magnificent visions of this new ritual object. The exhibit helped promote and spread the custom. Today, a Google search of images of Miriam’s Cups yield hundreds of images. 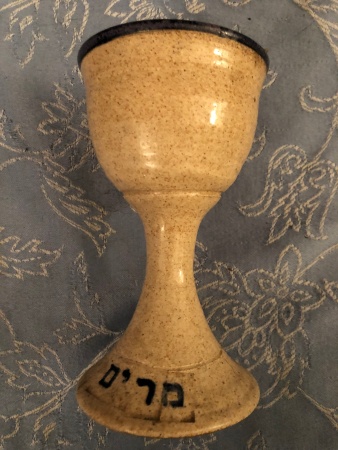 A 1996 liturgy from the Kol Ishah organization reads: “This is the Cup of Miriam, the cup of living waters. Let us remember the Exodus from Egypt. These are the living waters, God’s gift to Miriam, which gave new life to Israel as we struggled with ourselves in the wilderness. Blessed are You God, Who brings us from the narrows into the wilderness, sustains us with endless possibilities, and enables us to reach a new place.”  I use a similar liturgy at my own seders.

But what does this ritual object do?  To be powerful, a ritual object has to have an important ceremonial use or ritual moment. At many of my seders, I struggled to find a ritual role for my Miriam’s Cup that felt meaningful. The Elijah’s cup is associated with the ancient idea of the fifth cup at the seder, the cup of redemption and the future. While no one drinks from it, at my childhood seder, that cup was the focus of attention as we opened the door for Elijah near the end of the seder.  Sometimes we included Miriam in the door-opening ritual, but somehow it seemed a little crowded.

At some seders, we passed around the Miriam’s Cup and each took a little water and mentioned what we needed to receive that year.  Then we passed around the Elijah’s cup, added a little wine from our own glasses, and mentioned what we wanted to give that year. That was beautiful, and gave each guest a moment to be witnessed by the whole group. It worked wonderfully at small seders, but it was too time-consuming at a large seder.

Recently, in our own family and community seders, we have settled on merging the Miriam’s Cup with another stage of the seder: the handwashing. There are two ritual handwashings during the seder, one near the beginning and one right before the meal.  The second handwashing has a blessing, but the first handwashing has no blessing. So we say the blessing over the Miriam’s Cup right before the first handwashing, and then (in non-Covid years) we wash one another’s hands.  Miriam, who once waited by the Nile to watch over a baby in a basket, watches over our acts of care for one another. 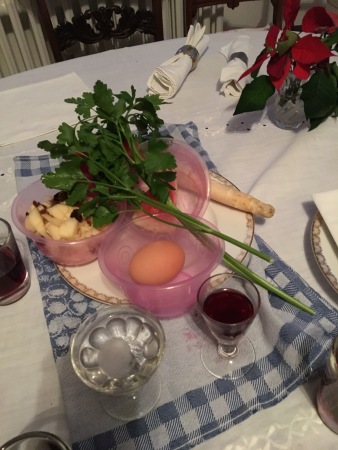 This tradition, while new, feels in line to me with the way that Sephardic women healers invoked Miriam as a healer who used water as her medium of healing, as scholars Jack Levy and Rosemary Zumwalt note. The Jewish law code known as the Shulchan Aruch imagines that all water drawn on Saturday night is water from Miriam’s well and is healing (Orach Chayyim 299:10).  Washing can be a way of offering healing to someone.

Plus, when we use water to wash one another, we are engaging in the biblical tradition of hospitality, just as Abraham washed the feet of the angels (Gen. 18:4). We can use water to welcome one another into sacred space, just as Miriam’s well, which some say set itself up at the center of the wilderness camp, helped to create sacred space for the Hebrew tribes.

This year, when the first night of Passover is Saturday night, feels like an especially good time to honor Miriam with a water ritual at the seder.   If you want to include Miriam in your washing ritual, you can use this short version of the prayer listed above, and the traditional handwashing blessing (which is presented here with feminine God/dess language, the way out family says it).

This is the Cup of Miriam, the Cup of Living Waters.
Let us remember the Exodus from Egypt.

Blessed are you, Divine Presence, spirit dwelling in the world, who has sanctified us with sacred practice and given us the practice of washing our hands.

For me, the story of Miriam, with her drum and her well, is a remnant of ancient stories about priestesses.  I’m glad to have her at my seder table beside Elijah—and I’m glad to have found a place in the seder where she can really shine.   Wishing those who celebrate Passover a joyful festival of liberation—and may we all know freedom speedily in our days.

Rabbi Jill Hammer, PhD, is the co-founder of the Kohenet Hebrew Priestess Institute and the Director of Spiritual Education at the Academy for Jewish Religion.  She is the author ofThe Jewish Book of Days: A Companion for all Seasons, The Omer Calendar of Biblical Women, The Hebrew Priestess: Ancient and New Visions of Jewish Women’s Spiritual Leadership (with Taya Shere), Siddur haKohanot: A Hebrew Priestess Prayerbook (with Taya Shere) andThe Book of Earth and Other Mysteries.  Her forthcoming book is titledReturn to the Place: The Magic, Meditation., and Mystery of Sefer Yetzirah. She is a poet, scholar, ritualist, dreamworker, midrashist, and essayist.

Like Loading...
‹ Rabbit, The Feminine, and The Moon by Judith Shaw
I Heard my Own Siren Song, and Followed It (a poem) by Marie Cartier ›