Home › Activism › A Next Wave of Scholarship By Kwok Pui Lan

A Next Wave of Scholarship By Kwok Pui Lan 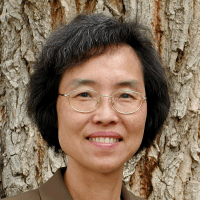 I came to the United States in 1984 to begin my doctoral studies at Harvard Divinity School. It was an exciting time to do feminist theology and religious studies. Womanist ethics just began to emerge, as Dr. Katie Geneva Cannon has just completed a dissertation on the subject at Union Theological Seminary in 1983. I count it as a blessing that she was teaching at the Episcopal Divinity School, just on the other side of the Cambridge Common.

The mid-1980s saw the paradigm shifts in feminist studies in religion, as womanist, mujerista/Latina, Asian and Asian American women began to articulate their own theological understanding. If Womanspirit Rising (1979) was a reference text for our field, which contained essays by white women, we had the first reader by radical women of color, This Bridge Called Our Back(1981).

We began to discuss multiple oppressions and multiple identities, and the need to integrate race, class, and gender into our analyses. We challenged white women who have universalized their middle-class, white experience as if women were all the same.

In the past several years, I participated in a group investigating the intersections among race, sexuality, and postcoloniality, since we were using critical race theory, queer studies, and postcolonial theory in our work. We wanted to see what are the commonalities and differences if we looked at the intersections through different racial lenses, sexual practices, and (post)colonial experiences. 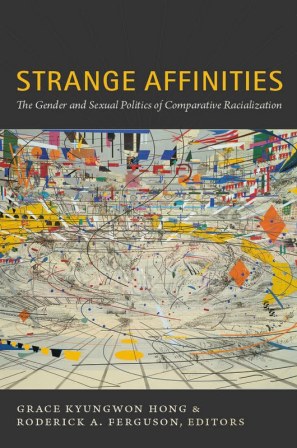 I am glad to see many new works have been published that push us to see the intersections in radical new ways. The subtitle of Strange Affinities is worth paying attention to: “The Gender and Sexual Politics of Comparative Racialization.” The cutting-edge essays explore the production of racialized, genderized, and sexualized difference, and the possibilities for progressive coalitions or the “strange affinities.” Even the headings of the different sections make me think, “alternative identifications,” “undisciplined knowledges,” and “unincorporated territories, interrupted times.”

If you are one of those who think psychoanalysis is nothing more than a mind trick of middle-class Europeans. Think again. Unconscious Dominions says, “By the 1920s, psychoanalysis was a technology of both the late-colonial state and anti-imperialism.” In Dark Continents: Psychoanalysis and Colonialism, Ranjana Khanna reveals “the psychical strife of colonial and postcolonial modernity.” The collection of essays in Unconscious Dominions pushes the envelope even further, with the ambitious subtitle “Psychoanalysis, Colonial Trauma, and Global Sovereignties.” The contributions touch on French West Africa, Algeria, Australian aborigine, India, Brazil, Indonesia, and Haiti. It is nothing less than “psychoanalysis writing back.”

If you are puzzled by why the police and officials used so much force to harass and arrest the peaceful Occupiers, Freedom with Violence: Race, Sexuality, and the US State will offer you much food for thought. Chandan Reddy examines “a crucial contradiction at the heart of modernity: the nation-state’s claim to provide freedom from violence depends on its systematic deployment of violence against peoples perceived as nonnormative and irrational.” Remember that Newt Gingrich told them to “go get a job right after you take a bath”?

If I belong to the generation that has pushed against the boundary of the white canon and scholarship, I see a new wave of scholarship is on the horizon. This new wave radically interrogates assumptions about race, gender, sexuality, culture, national citizenship, global sovereignty and global futures. Brilliant and groundbreaking, these new works stretch our static concepts and methods, introduce the new vocabularies of globalized unconscious and fragmentation of sovereignties, and investigate the connection between violence and social formations of difference. It theorizes the nation and the global in ways much more sophistically than our generation has done.

There is a time lag between religious scholarship and scholarship in other disciplines, usually about 10-15 years. Edward W. Said published Orientalism in 1978, and the first essay on postcolonial biblical criticism by R. S. Sugirtharajah was not published until 1994. The first book on postcolonial theology was published in 2004.

I sincerely hope that the upcoming generation of religious scholars will catch up sooner and engage with this new wave of scholarship in earnest.

This article is cross-posted on Kwok Pui Lan’s personal blog.

Dr. Kwok Pui-Lan is an internationally recognized scholar and pioneer in Asian feminist and postcolonial theology. She teaches at the Episcopal Divinity School and is the 2011 president of the American Academy of Religion. Dr. Kwok has published extensively and is the co-editor of two volumesOff the Menu: Asian and Asian North American Women’s Religion and Theology (Westminster) andEmpire and the Christian Tradition: New Readings of Classical Theologians (Fortress). Her other publications include Postcolonial Imagination and Feminist Theology (Westminster), Discovering the Bible in the Non-Biblical World (Orbis), and Introducing Asian Feminist Theology (Pilgrim).

Like Loading...
‹ How to Talk to a Deity* By Barbara Ardinger, Ph.D.
Michele Bachman is a Woman: Using the Gender Card in Iowa By John Erickson ›