What le renard teaches le petit prince is that when people tame each other, they spend time together and get to know each other. It’s not power-over, but power-with. We become important to each other…. The world is made more sacred. That’s what we pagans and good, honorable people in the other religions who talk to each other without preaching are doing.

In Le Petit Prince (The Little Prince) by the French writer and aviator Antoine de Saint-Exupéry, the little prince takes advantage of the migration of wild birds to leave his home, the tiny Asteroid B 612, because he running away from a vain and fickle rose. After he arrives on earth, he sees a whole garden of roses, and it breaks his heart because he thought his rose was unique in all the world. When he returns to the desert where he originally landed, he meets le renard, a very wise fox. The fox tells the prince that they should “tame” each other. “Apprivoise-moi,” he says, “tame me. Let us create ties so that we know each other.”[i]

As they continue to talk, the fox remarks, “My life is boring. I chase chickens and men chase me. The prince says he came from another planet. “Another planet?” asks the fox.

“Il y a des chasseurs, sur cette planete-la? Are there hunters on your planet?”

And so the fox sighs. “Rien n’est parfait. Nothing is perfect.” 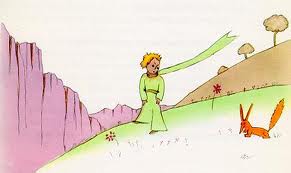 As I’ve been reading the blogs posted on this site and reading in the papers about the religious right’s war on women, le renard’s comment keeps coming to mind. We who blog together on Feminism and Religion have sort of tamed each other. We read each other’s blogs. We’re friendly. We’re not hunting each other. In a sense, by putting our philosophies in writing and asking questions, we’re trying to create a perfect world. Or at least a corner of semi-perfection in an imperfect world. But still, as le renard says, Rien n’est parfait.

I believe that the world’s religions are highly imperfect. All of them. Even mine. First, I don’t understand why people think a god picked up a quill pen one day a few millennia ago and wrote a holy book. If that god were writing today, would the holy book be written on a PC or a Mac? Would he be sending text messages to his followers? Would he write OMG? In reference to himself? If he texted, I’m sure his message would be just about as incomprehensible as some of the holy writ I’ve read. (And, yes, even though I’m a pagan, I have studied comparative religion and I’ve read the Bible. The whole thing. Several times. And other holy books, too.) Did that god sit down at his heavenly desk and dictate his rules and stories to a male secretary? To me, that sounds hallucinatory on the part of the amanuensis. If a man or a committee of men wrote the book, let them admit they did it. The holy books aren’t perfect. They’re quasi-historical documents written by men with agendas to push. Are there any holy books written by women beyond Elizabeth Cady Stanton’s Woman’s Bible, first published in 1895?

Second, I don’t understand a god or men who are either so enticed or so enraged by the sight of a woman’s hair or skin that they make the women cover themselves up. I don’t understand why this is called modesty. Nor do I understand why women are kept at home and why some very conservative men get to pray all day while their women do all the work to support the household. It says in the gospels that Jesus treated women with respect. They were his first disciples. So why can’t women be priests or imams? Why are nuns considered lower than priests? If you want to see an example of this inequality, watch the movie Doubt  and pay attention to the dinner scene where the women are trying to chew gristle and drinking water, whereas the priests are eating prime rib and drinking wine. Rien n’est parfait. The Southern Baptists took women out of the pulpits a couple decades ago, and until recently, women couldn’t be rabbis, either. It wasn’t until the middle of the last century that men decided that women have souls. Rien n’est parfait.

We pagans don’t have any holy books, not even the leaves written by Cumaean Sibyl that were blowin’ in the Roman wind. (She put them outside her cave so they would blow away.) We have the Charge of the Goddess, which was probably written by Gerald Gardner in the 1950s and exists in several versions. Here’s a little bit of it: Let my worship be within the heart that rejoices, for behold, all acts of love and pleasure are my rituals. Therefore, let there be beauty and strength, power and compassion, honor and humility, mirth and reverence within you. Doesn’t sound much like Deuteronomy, does it. We pagans also lack a pope or chief prophet. We don’t even have a popess or a high prophetess. Our so-called authorities are ordinary people who write books, create rituals, and lead workshops that teach the lore of the Goddess and the old gods. It’s said that we modern pagans are born rebels (moi?) and more or less make up our thealogy as we go along. What’s wrong with that? Is theology required to be parfait?

What le renard teaches le petit prince is that when people they spend time together and get to know each other, they’re taming each other. It’s sharing, it’s not power-over, but power-with. We become important to each other, and even things around us—like the golden wheat that reminds the fox of the boy’s hair—become significant to us. The world is made more sacred. That’s what we pagans and good, honorable people in the other religions who talk to each other without preaching are doing.

Like our sisters and brothers in other religions and especially those who study the New Age paradigms, we’re great borrowers. We find holy writing everywhere, even in so-called children’s books like Le Petit Prince. After all, if you know enough about metaphysics, you can find meaning anywhere. So let’s look at another lesson taught by le renard.

Before they part, the fox shares his most important secret with the boy. Voici mon secret. Il est très simple: on ne voit bien qu’avec le coeur. L’essential est invisible pour les yeux. “Here is my secret. It’s very simple: we don’t see well except with our heart. What is essential is invisible to the eyes.” 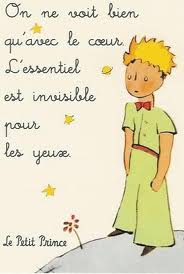 The outward things we see are not perfect. They’re some of the very things I’ve just been complaining about in the standard-brand religions. Rien n’est parfait.

So what is perfect in the world? What can we make perfect? Tiny things. Things that are invisible to the eye but felt in the heart. Loving-kindness. Courtesy. Understanding. The fox says, C’est le temps que tu as perdu pour ta rose qui fait ta rose si importante. “It’s the time you’re spent with your rose that makes her so important.” I translate this as spending time with each other, as being present with each other. We in the FAR community are present with each other as we read each other’s blogs and comment on them. We’re present as we talk to people in our communities and tell them that we’re writing these blogs.

If you love Le Petit Prince as I do, you can see it on DVD. Lerner and Lowe wrote the score for a movie version starring Richard Kiley as the aviator, Donna McKechnie as the rose, Gene Wilder as the fox, and Bob Fosse as the snake. It’s not, alas, their best work, but you can see the whole story of the aviator’s crash in the desert and his meeting with the little prince. There’s also a wonderful children’s opera with beautiful music by Rachel Portman.

[i] I’m reading and quoting from the same copy of the book I read in my high school French class. Le Petit Prince, avec les dessins de l’auteur.Paris: Editions Gallimard, 1946. I’ve owned this book for more than 50 years and also used it when I taught high school French in the 1960s.

Barbara Ardinger, Ph.D. (www.barbaraardinger.com), is a published author and freelance editor. Her newest book is Secret Lives, a novel about grandmothers who do magic.  Her earlier nonfiction books include the daybook Pagan Every Day, Finding New Goddesses (a pun-filled parody of goddess encyclopedias), and Goddess Meditations.  When she can get away from the computer, she goes to the theater as often as possible—she loves musical theater and movies in which people sing and dance. She is also an active CERT (Community Emergency Rescue Team) volunteer and a member (and occasional secretary pro-tem) of a neighborhood organization that focuses on code enforcement and safety for citizens. She has been an AIDS emotional support volunteer and a literacy volunteer. She is an active member of the neopagan community and is well known for the rituals she creates and leads.

Like Loading...
‹ If I Had Breasts by Erin Lane
Why a Kippah Reminds Me that Rationality Should Not Be Our Only Imago Dei By Ivy Helman ›