Home › Feminism › The Wit of the Labrys by Xochitl Alvizo

The Wit of the Labrys by Xochitl Alvizo 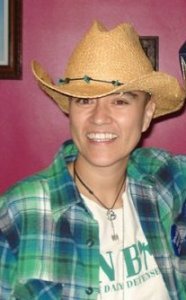 Sometimes I wish I were wittier. Or more precisely, there are moments when I become acutely aware of my underdeveloped wit – and I long to know how to sharpen it!

I have some pretty witty people in my life – my dad, my feminist mentors, my best friends.  They generally fall into two categories, radical lesbian feminists and women-identified men.  The interesting thing about these friends and family members of mine is that they have something very important in common – they all live their lives going against the grain. They are not people content or resigned to the status quo. They are not satisfied with the default ways of the world – the violence, exploitation, hierarchies of valuing various people differently. They understand that all of this is brokenness, and at the same time, they know that all of this is very much part of our reality. I think this is where their wit comes in. For how does one live with a vision for a more beautiful and just world while also daily facing and struggling through the reality of the world as it is? I think their wit is a key factor in sustaining their Wild unstilted spirits.

For Mary Daly, the Labrys is an Elemental feminist symbol; the double-sided tool of Wild wisdom and wit used to cut through the web of patriarchal lies and reversals – the mazes of man-made mystifications. It is a tool of feminist empowerment. The Labrys enables one to cut through patriarchal illusions and Dis-close the deceptive deadly devices used to bind and deceive people, pacify them to the present order. Think of such terms as “legitimate rape” and “weapons of war” – wisdom and wit untangles these and Dis-closes them as reversals designed to stultify the mind and make room for a contradiction (illegitimate rape or weapons of peace), which in reality makes no sense. Nonetheless, as the predominant non-sense, one has to have enough wits about her to be able to untangle these binds and double-binds that block the breakthrough to new imaginations, visions, and forms of being in the world. Wisdom and wit refuses to give in to the status quo or the psychic numbing required to preserving it. 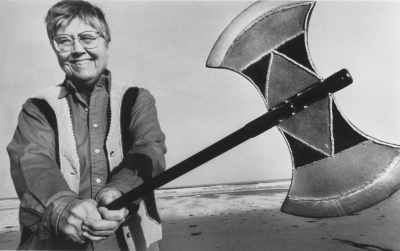 Sometimes the moments when words fail to show up for me are when I’m caught in an encounter of being ‘othered’. Usually this happens around my ethnicity. Once at a conference of about 70 people, I was one of the four or five people who were not white. This is not an unusual experience for me or a source of much discomfort; for at least a decade now I have gotten quite used to being in predominantly white academic settings. And since I am pretty friendly, I can connect with people quite easily. But at this particular event the discomfort occurred when a white male person came up to me and as he extended his hand to shake mine, staring at my name tag said, “Where do you come to us from?”

At first impression, this might seem like a harmless greeting, another way of saying hello. But there was something about the way he emphasized the ‘you‘ while staring at my name tag with a puzzled face that gave away the undertones. “Where do you come to us from?” You, whose nametag I cannot read. You, who must clearly be from an alien place with that foreign name of yours. You, who clearly are not from here, but have now come here to us.

I never know how to respond in those moments. Sometimes my witty responses come to me days too late, other times the wit doesn’t come at all, but I sure wish it did. The lie in those moments when I am being othered is the lie that I do not belong. That who I am and why I am present needs justification – I need to justify myself to him who counts himself the norm. I have the wisdom to know that the lie is not true, but not yet the wit to know how to Dis-close the embedded assumptions of the interaction in that moment. I welcome your suggestions.

At another conference with about 40 Protestant ministers from across the country, a white male pastor, clearly having taken note of what I was wearing, cheerfully greeted me with, “Oh! Is this your traditional tribal wear?” Mind you, I was dressed in no extraordinary manner – a flowing skirt and an embroidered shirt. Staring at him awkwardly, with not witty response at hand, I say, “Uhm…well…(looking down on my clothes trying to figure out what he sees)…I did get this shirt in Mexico(?).”

Emily Culpepper at Mary Daly’s Memorial service on May 1, 2010, passing the Labrys to the Hedge Hags. I’m standing 4th from the right.

The thing about wit is that it is creative by nature. It invites new thinking without the need to demand recognition. It functions as it does because it already is what it is – the ability to see beyond the foreground, the ability to see the alternative possibilities and live into them. It requires nothing of the other as it already participates in that to which it points and is therefore not threatened or threatening. Wit names change and at the same time elicits it; it is transforming and in that way complete. But in the existential moment of being ‘othered’ I somehow get caught in the bind. I am thrown off balance and my Labrys falters.

My Nag-Gnostic challenge to you is to help me think this through. Wield your Wild wisdom and wit and help me sharpen my own. I have the tools, but could use some Crone-logical wisdom to sharpen my wit.

Xochitl Alvizo is a feminist Christian-identified woman and a Ph.D. candidate in Practical Theology at Boston University School of Theology. She loves all things feminist. Finding herself on the boundary of different social and cultural contexts, she works to develop her voice and to hear and encourage the voice of others. Her work is inspired by the conviction that all people are inextricably connected and what we do, down to the smallest thing, matters.

Like Loading...
‹ This is Why I Don’t Pray by Erin Lane
Thinking About Thanksgiving by Carol P. Christ ›