Home › Ecofeminism › The Danger of the Patriarchal Domination Mindset: Can We Do Anything About It? by Thea Iberall

The Danger of the Patriarchal Domination Mindset: Can We Do Anything About It? by Thea Iberall

At the confluence of misogyny, prejudice, homophobia, religious intolerance, environmental destruction, and violence is the patriarchy. We all know this and talk about it here from our own perspectives. I come as a scientist and writer. I have a love of history and science as well as a skill at simplifying complicated things. I abhor what some people are doing to our planet and the arrogance with which they do it. Unfortunately, because we want the stuff they are manufacturing, because there are too many of us, and because we are letting them do it, they do it with our blessings. I want to help change this situation with a novel I’ve been working on for almost 15 years.

In the year 2000, I sat in a dinghy in the caldera of the active underwater volcano at Santorini helping my geologist sister count the bubbles coming from below us. The experiment was part of my father’s research into the origins of life. I had had the seed for a novel thirteen years earlier when I heard Mimi Fariña sing The Swallow Song, talking with her about her deceased husband Richard Fariña and how lost his music has become. I began developing ideas, learning about the nightingale connection and discovering a 12th century Sufi master’s epic allegory about god. Sitting in that dinghy, everything coalesced: the story of how western civilization went off course. My book of contextual poems, The Sanctuary of Artemis, explores the roots of Western patriarchal culture and tells some of it. The novel would have a backdrop of a world collapsing as ornithologist Dr. Deborah Wright is unwittingly guided by the Sufi to figure out why the Capistrano swallows are dying. It would include an underlying history of an egalitarian world lost when this volcano erupted in 1628 BC. Richard Farina’s song would be playing throughout the pages.

Novels in the past have made an impact on societies. When President Abraham Lincoln met Harriet Beecher Stowe (author of Uncle Tom’s Cabin), he said, “So, you’re the little woman that wrote the book that made this great war” (referring to the American Civil War to abolish slavery). Upton Sinclair’s novel The Jungle (about the meat-packing industry) led to changes in government regulations and the establishment of the US Food and Drug Administration. Betty Friedan’s book The Feminine Mystique sparked the second wave of feminism in the US.

We are in the third wave of feminism. It encompasses queer theory, anti-racism, ecofeminism. Central issues of the third wave are gender violence, reproductive rights, sexual harassment, and the glass ceiling—all aspects of patriarchal domination. 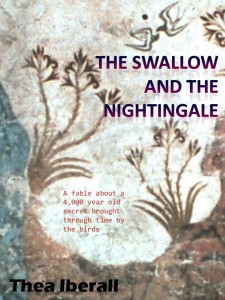 The Swallow and the Nightingale is a fable about a 4,000 year old secret brought through time by the birds. The story is like The Celestine Prophecy meets Sodom and Gomorrah, challenging the reader to become a moral compass for good. Against a backdrop of anthropogenic problems (e.g., global warming, genetically-modified foods, weather modification, fracking, pollution, etc), Dr. Deborah Wright decides to help her lesbian daughter go after what she wants: to marry in the Orthodox Jewish temple. To heal her relationship with her daughter, Deborah has to prove to the Rabbi that same-gender love is moral even though she herself doesn’t believe it. But Deborah has a second question. The swallows at San Juan Capistrano are dying and as an ornithologist, she has been invited to help in the study. Unfortunately, the person heading up the scientific group is her estranged husband. In addition, her scientific reputation is under a cloud; getting involved could either help exonerate her or ruin her career for good. Woven into the foreground and background story are prejudice, white privilege, anti-Semitism, misogyny, homophobia, destructive environmental practices, and corporate greed—all patriarchal constructs that dominate and compete to disrespect people and the planet. As the story progresses, Deborah learns that the patriarchal domination mindset is behind the problems, and she comes to believe that this is the real moral issue facing us, not who loves who. By seeing her scientific and moral problems reverse, the story makes a point that as long as we disrespect the Earth, its components, and its inhabitants, we are immoral as a patriarchal-dominated species and no amount of finger pointing at society’s so called misfits will make any of us moral.

Some contributors to FAR have already read the book and helped strengthen the manuscript. I am exploring ways to publish the book. A book can be a game changer. Why can’t we bring down the patriarchy? If we don’t, it’s going to bring us down.

Thea Iberall is a playwright, poet and scientist. She is the author of The Sanctuary of Artemis, a collection of contextual poems that explores the roots and origins of Western patriarchal culture through evolution, religion, neuroscience, history, mythology, symbolism, and linguistics. Thea has had over 40 poems published in anthologies and journals including in Blood to Remember: American Poets on the Holocaust. She is featured in the documentary GV6: Poets, Passion and Poetry. Her produced plays include: Primed For Love, When I Was Called Tony, At Seven, and Amacry! The Neuronic Musical! Her one-woman show The Only Thing Greek About Me is My Name has been performed at multiple theatres. And her show We Did It For You! tells the story of how women got their rights in America. She has a Master’s Degree in Writing (USC) and a Ph.D. in Computational Neuroscience (U Mass).

Like Loading...
‹ Whose Children Are Our Children? Whose Children Do We Care About? by Carol P. Christ
Women as Stairways to Heaven by Jameelah X. Medina ›