Home › Art › Birth as a Shamanic Experience by Molly

Birth as a Shamanic Experience by Molly 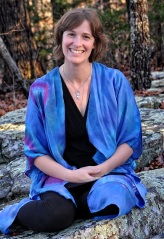 “Childbirth is a rite of passage so intense physically, psychologically, emotionally, spiritually, that most other events in a woman’s life pale next to it. In our modern lives, there are few remaining rituals of initiation, few events that challenge a person’s mettle down to the very core. Childbirth remains a primary initiatory rite for a woman.” –Maren Hansen (MotherMysteries)

When I was pregnant with my first baby, I read an article with the theme of “Birth as a Shamanic Experience.” I can no longer find the exact article (online or printed), but I distinctly remember my feeling upon reading it: I was entering into a mystery. Giving birth was big. Bigger than anything I’d ever done before and it went beyond the realm of a purely biological process and into something else. Like shamanic experiences, giving birth is often described as involving a sense of connection to the larger forces of the world as well as being in an altered state of consciousness or even a trance state. While shamanic experiences may involve “journeying” to other realms of reality, giving birth requires the most thoroughly embodied rootedness of being that I’ve ever experienced. It, too, is a journey, but it is a journey into one’s own deepest resources and strongest places. The sensation of being in a totally focused, state of trance and on a soul work mission is intense, defining, and pivotal.

Shamanic journeys may be embarked upon for the purpose of soul retrieval and I can’t help but think that this is the purpose of giving birth as well—the birthing woman travels into herself to bring forth the soul of her child.

“Birth is certainly messy and bloody. It is intense, fierce, fiery and loud, but not violent. It is bloody from shamanic transformation. Birth-blood is the primordial ocean of life that has sustained the child in utero; the giving of this blood in birth is the mother’s gift to her child. The flow of blood is the first sign, following the flow of waters, that signals that new life is on the way, just as it is the first sign of a young maiden’s initiation into a new life at her menarche. The blood of transformation is miraculous. In Spanish, the phrase ‘dar a la luz, to give birth, literally means ‘to give to the light’. Giving to the light — mothers giving birth are giving light to new life through blood. The messiness and bloodiness of birth are the gift of the Earth–elemental chaos coming into form.”

via Article: Birthing as Shamanic Experience.

In the aftermath of giving birth, particularly without medication, many women describe a sense of expansive oneness—with other women, with the earth, with the cycles and rhythms of life. People who become shamans, usually do so after events involving challenge and stress in which the shaman must navigate tough obstacles and confront fears. What is a laboring woman, but the original shaman—a “shemama” as Leslene della Madre would say —as she works through her fears and passes through them, emerging with strength.

After explaining that the homebirth of her second son was her, “first initiation into the Goddess…even though at that time I didn’t consciously know of Her,” Monica Sjoo writing in an anthology of priestess essays called Voices of the Goddess, explains:

The Birthing Woman is the original shaman. She brings the ancestral spirit being into this realm while risking her life doing so. No wonder that the most ancient temples were the sacred birth places and that the priestesses of the Mother were also midwives, healers, astrologers and guides to the souls of the dying. Women bridge the borderline realms between life and death and in the past have therefore always been the oracles, sibyls, mediums and wise women…

…the power of original creation thinking is connected to the power of mothering. Motherhood is ritually powerful and of great spiritual and occult competence because bearing, like bleeding, is a transformative magical act. It is the power of ritual magic, the power of thought or mind, that gives rise to biological organisms as well as to social organizations, cultures and transformations of all kinds… (page unknown).

I have been a childbirth educator since 2006 and I have given birth four times. Each birth brought me the gift of a profound sense of my own inherent worth and value. Interestingly, it is the second-trimester death-birth of my third child that I would also describe as a type of religious experience, however. As I’ve previously described in a variety of posts, it was one that ushered in a new sense of my own spirituality and that involved a profound almost near-death experience for me. After passing through this intense, initiatory crisis, the direction and focus of my life and work changed and deepened. Shortly after the death-birth of my third son, I wrote:

Though my miscarriage was the most difficult and saddest experience of my life, I feel like it was a profound and transformative and actually sacred experience. I am so grateful to my little Noah and for the gifts he brought to my life. His birth has taken its place as the most transformative experience of my life. I feel like I am still in this place of “openness” after birthing him, where I am ripe for growth and change and discovery…

…I feel like I can appreciate more fully the totality and complexity of the female experience/life as a woman.

via Open to Change | Footprints on My Heart.

I feel I actually encountered the Goddess most meaningfully during this time of personal suffering. While I previously connected strongly with Goddess imagery and was interested in Goddesses and women’s spirituality from a feminist perspective that valued the symbolism in a socio-political context, I did not feel a truly personal experience of Goddess “energy” until this pregnancy loss. That is when I felt She actually existed and when I realized that I was in relationship to her all the time. When being transferred to the hospital due to excessive blood loss, I sang the Woman Am I chant that we use during mother blessing ceremonies to let my husband and mother know I was still alive (at this point I had been losing grapefruit sized clots of blood). During this transfer to the emergency room, I felt close to death, but I did not feel scared of dying because I felt a compassionate presence, that I later concluded could be defined as “Goddess.” And, in the aftermath of this tiny son’s birth, I felt accepting of myself in a way I had never felt before. A sense of being held. A sense of profound worth. Something perhaps similar to the “ground of being as Love” that Carol Christ describes in her writings. I was also amazed to discover that after years of self-defining as areligious, I did in fact have a spiritual language and conceptualization of my own and that these were the deep resources I gathered to me during a time of significant distress, fear, and challenge.

This loss experience reminds me in several ways of descriptions of a shamanic initiatory crisis. This phenomenon is, “…a rite of passage for shamans-to-be, commonly involving physical illness and/or psychological crisis…”

The wounded healer is an archetype for a shamanic trail and journey. This process is important to the young shaman. S/he undergoes a type of sickness that pushes her or him to the brink of death. This happens for two reasons:

The shaman crosses over to the underworld. This happens so the shaman can venture to its depths to bring back vital information for the sick, and the tribe.

The shaman must become sick to understand sickness. When the shaman overcomes her or his own sickness s/he will hold the cure to heal all that suffer. This is the uncanny mark of the wounded healer.[14]”

Following the miscarriage-birth of my baby, I experienced another early miscarriage at six weeks. I then went on to become pregnant with my daughter. As I moved through the early weeks of her pregnancy, I realized that while I had longed to restore my “rightful” state as Pregnant Woman, I felt disconnected from the physicality of being pregnant again. I felt as if I needed to actively and purposefully re-incorporate the pregnant identity into my sense of self. I turned to birth art, creating the first of what would become an ongoing, two-years-and-counting process of 3-D journaling, making polymer clay goddess sculptures about my life and feelings. To welcome Pregnant Woman back into my heart, soul, and identity, I created a full-figured golden sculpture of a pregnant goddess and as I worked on her, I began to settle back into the feeling and connection of being pregnant again. She sat on my altar until my new baby girl was safely born and held close to my heart. 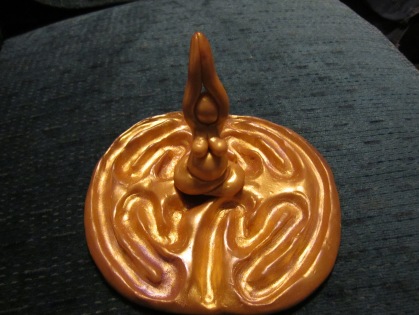 The labyrinth is a potent spiritual metaphor for birth and life and I will explore this concept in my next post!

my body is my altar
my temple.

I cast a circle
with my breath
I touch the earth
with my fingers
I answer
to the fire of my spirit.

The reach of my fingers
my ritual
the song of my blood
my blessing
my electric mind
my offering.

Molly is a certified birth educator, writer, and activist who lives with her husband and children in central Missouri. She is a breastfeeding counselor, a professor of human services, and doctoral student in women’s spirituality at Ocean Seminary College. Last summer she was ordained as a Priestess with Global Goddess. Molly blogs about birth, motherhood, and women’s issues at http://talkbirth.me, about thealogy and the Goddess at  http://goddesspriestess.com, and creates goddess art and jewelry at http://etsy.com/shop/BrigidsGrove.