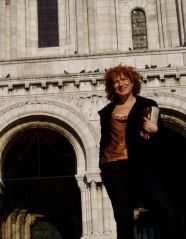 In David Kelsey’s theological anthropology, Eccentric Existence, he emphasizes that finitude renders creation vulnerable, but he still insists on the goodness of what he terms the “quotidian proximate contexts” in which human life is lived: our ordinary, everyday lives. Terry Pratchett’s Discworld novels bring together a multitude of characters – ethnically, religiously, and otherwise diverse – in the chaotic yet lively city of Ankh-Morpork (a fictionalized London). The Discworld offers what I see as a theology of everyday flourishing that fits with both Kelsey’s analysis of finitude and with significant feminist theological claims.

The books focus on the men and not-men (women, werewolves, vampires, trolls, a six-foot tall dwarf named Carrot, and a Nobby Nobbs) who populate the city and bring it to life. The characters of Pratchett’s city offer a vivid imaginative rendering of the vulnerabilities and possibilities of life in everyday finite contexts that bring together diverse creatures in the service of the goal of common flourishing. Although all theologies outline a social imaginary, whether implicitly or explicitly, the dry and technical character of much theological reflection can make it difficult for the reader to imagine what life would be or could be like given the proposals advanced by a particular author. Pratchett is a consummate observer of the everyday, and his world brings to life what a theology of the everyday would look like.

The Discworld is a flat, round world that sits on the backs of four elephants standing on the great turtle A’Tuin as it floats through space. The fabric of reality is thinner there, so things that we might consider insubstantial – ideas, hopes, fears, anthropomorphic personifications like Death – have their own reality. In a trajectory running from Guards! Guards! to Men at Arms, Jingo, The Fifth Element, Night Watch, and Thud!, we are introduced to the Night Watch of Ankh-Morpork, headed by Captain Sam Vimes who, when we first meet him, is lying drunk in a gutter. The Night Watch has dwindled to only a few useless and corrupt men. But things are about to change: Carrot is on his way to the city to join the watch. As the action unfolds, we will discover that Carrot is the true heir to the throne of Ankh-Morpork which, after experimenting with many different forms of government, has settled on the principle “one man, one vote”: the man is the Patrician, Havelock Vetinari.

The role of Vetinari, who creates balances of opposing powers that allow the city he rules to work, intersects with that of Captain Vimes, who refuses to accept Vetinari’s cold-eyed realism about human nature. The requirements of law determine Vimes’ way of being in the world. This is in contrast to the Patrician’s easy balancing of the various elements of Realpolitik and his casual acceptance of the intrinsic evil of human beings. As he says at one point, there are no good or bad people, just “bad people, but some of them are on opposite sides.” (Guards, Guards, 37) For Vetinari, this demonstrates the need for people like him. For Vimes, doing things the way they need to be done is the only defense against evil that he knows. Vimes is a character whose sense of the intrinsic vulnerability of the finite both to evil and to destruction occasionally overwhelms him. Only wise practices oriented to the flourishing of the quotidian – upholding the rule of law and equality before the law, using language truthfully, and affirming the value of life over against what threatens it, while still accepting that life ends in death – protect Vimes from despair.

Kelsey’s quotidian is ontologically finite, which makes it vulnerable to death. He distinguishes between ontological vulnerability and moral ambiguity. Ontological vulnerability is a description of the way finite creatures simply are vulnerable to death, to loss, and to destruction. But moral ambiguity – the presence of evil and injustice – does not have the same status of belonging intrinsically to finitude. Although it is already present in the contexts into which we are born, it does not belong there – it is “an a-rational, inexplicable intruder.” (EE 208) Kelsey reminds us that biblical wisdom literature shows no interest in a life beyond death, and has little room for a possibility of a final critique of death itself. The character of Death, an anthropomorphic personification who appears in many of the Discworld novels, similarly serves to remind the reader that whatever else happens in life, it will end in death. Does your life pass before your eyes before you die? Yes, it does so as you live it.

The meaning of this life is central to the possibilities of flourishing in everyday contexts. The only protection against the yawning threat of meaninglessness and futility is to get on with things, to act wisely for the flourishing of the quotidian even while recognizing and affirming its finitude and vulnerability. A theology of finite flourishing in quotidian proximate contexts might look very much like Pratchett’s satirical rendering of the challenges of life together. Pratchett offers a lively theology of finite ordinary existence that helps the reader to see her own context with eyes newly attentive to vulnerability, truth-telling, the threat of violence, and the inevitability of death. Neither Kelsey nor Pratchett are avowed feminists, but elements of their projects show a deep and unexpected affinity with feminist approaches to the value of ordinary life precisely in its ordinariness and finitude.