Home › Activism › Writing: Changing the World and Ourselves. By Ivy Helman

Writing: Changing the World and Ourselves. By Ivy Helman

I still remember the first tim 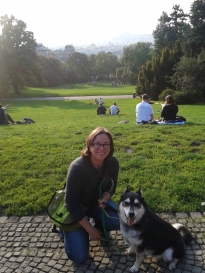 e I read Mary Daly’s Gyn/Ecology. It awoke something within me. Her use of language, the power of her writing and the ease with which she created new words taught me so much about the world around me and about the way the language, and subsequently its use in writing, shapes lives, choices, abilities and destinies. She also taught me about myself.

I was hooked, but not just on Mary Daly. Shortly after I finished her book, I moved onto other feminists writing about religion like Katie Cannon, Judith Plaskow, Alice Walker, Carol Christ, Rita Gross, Gloria Anzaldua, Audre Lorde, Adrienne Rich, Margaret Farley and Starhawk to name just a few. All of them, in fact every feminist I’ve ever read, has shown me the way in which words have power and how words speak truth to power. Ever since, I’ve wanted to be the kind of writer whose words carry a power that not only affects people but also inspires a more just, more equal, more compassionate and more humane world. In other words, I wanted to be a writer activist.

Yet, I’ve always carried around with me a sneaky suspicion that people don’t consider writers true activists. If you aren’t holding a sign, screaming or participating in some sort of public demonstration or civil disobedience, then you have no right to call yourself an activist. Is that really true?

A few months ago, I went to what some would call a “real” protest. We stood in the cold waiting for Obama’s Presidential caravan to pass us on his way to a fundraising dinner in Boston. We joined the chorus, of mostly Ukrainians, asking Obama to put sanctions on Russia. That evening he did. I felt successful even though I know that he didn’t change his mind because of me. It felt nice to just get out there, even when shivering was involved.

Being part of an action to demonstrate against injustice, prejudice, lack of freedom and/or inequality makes a powerful statement to those in places of authority.  It shows the people, as a collective of two to thousands, want something different.  It is an event that expresses outrage, commitment to a better world and unhappiness in the current system.

Writing is so similar. bell hooks, in remembered rapture: the writer at work, writes,  “No black woman writer in this culture can write “too much”. Indeed, no woman writer can write “too much”…When I witness their fear, their silences, I know no woman has ever written enough, (30).”  She continues by reminding the reader that feminists have worked long and hard to make women’s writing more valued by society.  She laments that we are still far from women’s writing being given the respect it deserves.

hooks believes that women, just by writing, are being activists.  We are demanding to be read, to have our words be given the same weight as men and to be heard by a patriarchal society that continues to put its fingers in its ears and sing to itself,  ” La la la la.”  How much more true is this then in some religious circles which continue to keep women from holding public and/or authoritative roles? I agree with hooks. Not only do I want to write, but hooks said I’m obliged to write.

Sarah Sentilles, another contributor on feminismandreligion.com, wrote for Ms. Magazine’s blog a few months ago arguing that women’s contribution to Wikipedia is a form of activism. She cites the statistic that only 13 percent of contributors to the free encyclopedia are women. Sentilles participated in an edit-a-thon, organized by Art and Feminism Wikipedia Edit-A-Thon to add women artists to Wikipedia which has consistently ignored their inclusion.  Here’s another example of the call for women’s writing as activism.  Yet the blog takes it one step further. We, as women, are called on to take an active role to record, share and remember our herstory.  We cannot afford to let it pass by unknown, undervalued and overlooked. In some ways then because we have the power to write, we must accept that challenge and do so. I agree with Sentilles. Not only do I want to write, but Sentilles says I need to write.

What these two writers show is that feminist writing, in and of itself, is a crucial form of activism.  When we write, we say that patriarchy cannot silence us any longer.   We educate, expose and inspire.  We fill in the gaps within his-story with the equally important herstory.  We demand the equality of women and men and the end to prejudice, discrimination, racism, classism, heterosexism and other patriarchal plagues.  We find respect and an inner strength.  We gain once again that voice which is rightly ours.

We, religious feminists and feminists interested in religion, also do more.  We find not only our human dignity but our dignity as religious persons as well.  We inspire spiritual quests and new religious rituals.  Some of us work to end sexism and patriarchy in the religious traditions in which we grew up.  We show generations of women and men that religion is not only important but that women have an important role to play in it.